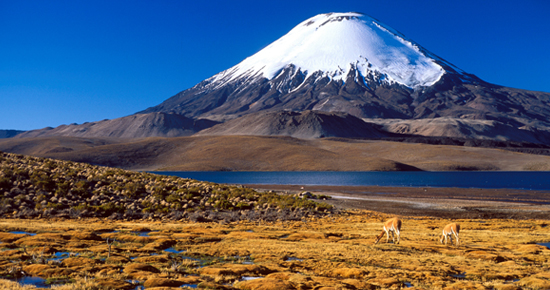 In the Tropic of Capricorn, at an altitude between 3,500 and 4,700 meters (2,2 – 2.92 mi),  this immense saline tongue is found that is narrowed toward the southeast by the formation of a western arm of the Andes, known as Cordillera de Domeyko or the Domeyko Mountain Range. In between these two mountain ranges emerges the Atacama Salt Lake.

The High Plateau Route of Integration

This is a highway under construction that will connect Cuzco to San Pedro de Atacama, following the traces of the ancient and monumental Camino del Inca (Road of the Inca). In the Chilean sector, the project links Visviri to San Pedro de Atacama. This is an area of more than 900 kilometers inside a zone also known as “el Gran Despoblado de Atacama” or the Great Atacama Outback.

To the north, the key locality is Putre, a small town 149 kilometers (92.6 mi) east of Arica that is becoming transformed into a new San Pedro. There are plenty of guest houses, hotels and adventure tourism companies there what organize trips to the region’s most important tourist spots, such as the cave paintings.

This trip covers a total distance of 91 km (56.5 mi).  The route heads south and soon the fish farming works come into view in Caquena River. The lagoons of Parinacota and Cotacotani reflect the clouds in the sky. Then you will reach Lake Chungará, the most photographed attraction in this zone.

Parinacota is located 42 kilometers (26 mi) from Putre, at an altitude of 4,392 meters (14,409 ft). Its inhabitants number just 149. It is a town of pre-Hispanic origin, located along the old Arica-Potosí route. Declared a typical zone, it is a National Monument that receives visitors with its very old church, built in the 17th century and reconstructed in stone in 1789.  In its interior, the walls are hung with impressive 17th century paintings and there is a table that is curiously tied down by the locals, who assure everyone that it is haunted.

The natural monument Salar de Surire is located 266 kilometers (165 mi) southeast of Arica, at an altitude of 4,245 meters (13,927 ft). It is a gigantic salt bed with a surface area of 11 hectares (27,181 acres), and in the middle of it rises Oquealla Mountain, 4,322 meters (14,178 ft) high. In the daytime the temperature is 5º C (41º F), and at night, -15º C (5º F), but despite these extreme conditions the high plateau is inhabited by many species, one of the most important being the ñandú or American ostrich.  Nature has gifted this land with three different kinds of flamingoes, out of the total six that exist in the entire planet, besides three kinds of camelids: the vicuna, llama and alpaca. The hot springs of Polloquere will invite you to relax after the strenuous trip.

Termas de Puchuldiza hot springs is located near Colchane, with clay baths and heated pools that vary in temperature from 30 to 85 degrees. In the winter, the cold turns the plumes of steam into veritable ice spikes up to 10 meters (32 ft) high.

Little-known Coipasa Salt Lake is 70 kilometers (43 mi) long, located right on the Chile-Bolivia border. Almost its entire surface area of 2,218 km2 is in Bolivian territory. For this reason it is considered Bolivia’s second-largest salt bed, after Uyuni. On the Chilean side, you can visit 25 km2 of Salar de Coipasa.

We recommend a visit to Cariquima and its famous knitters; the high mountains of Chuncaroni and Quetaine; Suri prairie and Villablanca Lagoon.

The highlight of this part of the route is the old adobe church of the town of Ancuaque. The trip continues toward Portezuelo de Picavilque, 5,100 meters (16,732 ft) high, to later descend, with the view in the distance of Salar de Huasco salt bed. The route will then lead you into the town of Lirima, founded in the 1980s by Aymara families who emigrated there from Cariquima in order to preserve their traditions. In Lirima the artisans dye and spin wool using their traditional methods and they produce attractive woven products.

This section of the route is an old path that was used by Aymaras from Bolivia in order to graze their animals and take their products to market. This is beautiful, cold portion that runs along the side of Coposa Salt Lake, and its strange geological formations.