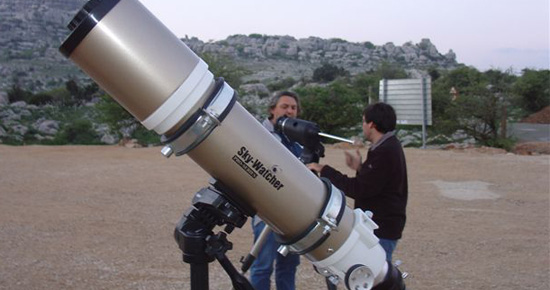 Chilean universities have access to 10% of the use of the astronomical observatories in the northern part of the country, including Paranal, the largest in the world.

It is a fact: northern Chile has some of the best conditions in the southern hemisphere for observing outer space. It is no coincidence that close to 80% of state-of-the-art telescopes south of the equator are in this country. But in the same way that many astronomers come to Chile to work, Chilean universities also offer an excellent chance to study astronomy. “Compared to the United States and Europe, Chile has the enormous advantage of making it possible to facilitate the use of its observatories, which is very complicated in northern countries,” says Nelson Padilla, a professor of astronomy at Universidad Católica. In addition, the astronomer adds that the stars that are visible from the southern hemisphere are not visible from the north.

But in addition to offering specialized training in the subject, the country has the best astronomical infrastructure in the region, an aspect in which Chile “cannot be directly compared with any other country,” Padilla says. In fact, the Cerro Paranal observatory, currently the most powerful in the world, is located in the Atacama Desert, the driest in the world.

For example, last 24 November the photograph of the Centaurus A galaxy literally devouring another, which happened between 200 and 700 years ago, was circulated throughout the world. The image was captured by the La Silla Observatory (located in the Coquimbo Region) thanks to the 3.58-meter New Technology Telescope, which allows an even more precise and clean view of this galaxy’s structure.

In addition, the ALMA (Atacama Large Millimeter Array) radio astronomy project, the largest astronomical project in the world, is being built in the Llano de Chajnator area, 60 kilometers from
San Pedro de Atacama, With an investment of US$ 1.2 billion, it is expected to be completed in 2012 and will have 66 high-precision antennas capable of picking up objects in the coldest parts of the universe.

Though these megaprojects are mainly financed by foreign organizations (such as the NRAO of the United States, Europe’s ESO and Japan’s NAOJ in the case of the ALMA project), 10% of their use is allocated to Chilean research, which provides the students of local universities with a unique opportunity. “Postgraduate students can use this 10% of the time for free so they can obtain data from the observatories for subsequent analysis in class, a benefit that also extends to foreign students,” Nelson Padilla states. As a reference, a night’s worth of observation in Cerro Paranal costs around US$50,000.