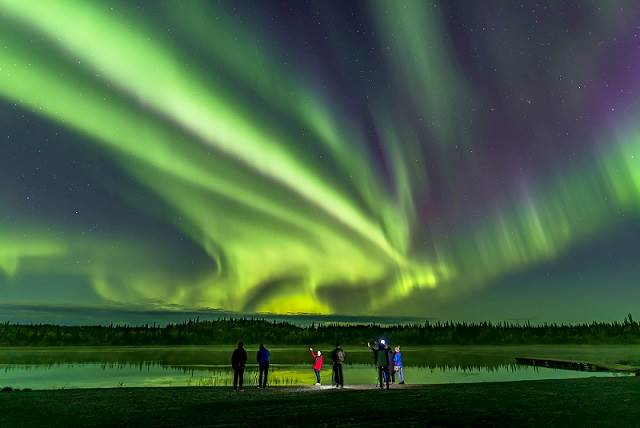 One peculiar thing we humans love to do is organise, categorise and make lists – especially when it comes to travel! The 7 Wonders of the Ancient World was the original must-see list, created by ancient Greek explorers. However this was written in the 2nd Century BC and many of us thought that it could do with a little updating! So in the year 2000, the New Seven Wonders Foundation was set up to create a campaign where the public could choose what they thought a ‘New 7 Wonders of the World’ list would contain. Incredible locations were featured such as Petra in Jordan, The Great Wall of China and the Colosseum in Italy. But with so many remarkable locations, seemingly out of this world, the foundation released another list – The 7 Natural Wonders of the World. The perfect bucket list for nature lovers.

There is a long list of locations where this mesmerising phenomenon can be seen but some of the most popular to visit are: Iceland, Alaska, North Canada, Norway, Finland & Sweden. So what actually are the northern lights? The famous green streaks of the northern lights occur when a chemical reaction takes place. Particles from the sun’s surface drift towards the earth, colliding with particles on the earth’s surface forming beautiful arcs of colour in the sky. The colour we see all depends on the gas particles in the collision and the distance from the earth’s surface when the collision happens. Visit ‘The Northern Lights’ page to read more.

The world famous Grand Canyon is an astonishing 227 miles long, 18 meters wide and over a mile deep. The deep gorge was created by the raging Colorado River which is said to have run this path for around 17 million years! Still snaking its way through, the river running below enables a little perspective on the sheer scale of this magnificent place. The beautiful, russet tones of the rock and the pure magnitude of the park cannot be fully appreciated until you are right there in the middle of it all.

Due to the odd formation of the rocks, the position of the sun changes the views and the colours of the scene throughout the day. Standing at one of the many lookout points gazing out onto a view that is unsurpassed is simply put, magical. If you are lucky enough to visit the Grand Canyon, we’ve heard that camping in the National Park under the stars is incredible!

The stunning harbour of Rio de Janeiro is situated on Guanabara Bay in Brazil. Stretching for a huge 19 miles, it makes this the largest harbour in the world. Surrounded by majestic, granite mountains such as the famous Sugar Loaf, Corcovado Peak and the Hills of Tijuca, and dotted with over 100 islands. Rio is also home to a myriad of stunning, sugar-white beaches, a wonderfully vibrant city and the best party in the world! Add all this to the fact that you have the watchful gaze of Christ the Redeemer looming over the city (one of the new 7 wonders of the world) it makes for a truly unique part of the globe.

The locals are so proud of their beautiful country that they have a special saying “God made the world in six days and on the seventh, he created Rio”. To get the best view of this otherworldly landscape, climb to the top of one of the mountains or if you can’t face that, there’s always the cable car!

The world’s highest point, lying between Nepal, Tibet and reaching the ridges of China, is the colossal Mount Everest. Reaching the summit is often regarded as one of life’s greatest accomplishments – and standing at 29,029 feet above sea level, it is not for the faint hearted! The first attempted climb was back in the 1920s, with the first person reaching the summit in 1953.

It has now become a popular bucket list activity for anyone looking to push themselves to the limit. And whilst Mount Everest is no longer seen as the unbeatable mountain, you do need to be in top physical condition to even get part of the way up. Due to Nepal’s recent earthquake in 2015, both Nepal and Tibet will be remeasuring the mountain as it is believed to have fallen!

Not the largest, tallest or most-visited Volcano in Mexico, but it makes the cut to the list of the 7 Natural Wonders of the World just because of how bizarre its story is. In 1943 in a cornfield in Paricutin, a farmer discovered a crack on his land. Within moments, the ground surrounding the crack had risen 6-feet high with rivers of ash pouring out of the hole. Within an hour, it stood at 50 meters high and by the end of the year, Paricutin Volcano was at a staggering 450 meters high!

Residents in the area were forced to relocate, entire villages having been buried under meters of lava. A popular tourist attraction is the half-buried church poking out of the lava rock, showing the level the lava had reached. What scientists particularly love about Paricutin, is that it’s the first ever time we have ever been able to witness the birth of a new volcano.

One of the most famous natural wonders is the largest waterfall (by volume) in the world! Located on the borders of Zimbabwe and Zambia in South Africa, the most famous waterfall in the world is about 1 mile wide and 360 feet high. The accurate, but rather poetic name the locals have for Victoria Falls is Mosi-oa-Tunga, meaning the smoke that thunders.

If you happen to be travelling to the Victoria Falls during a full moon, make sure you go on a night tour. The light from the moon is refracted by spray from the waterfall which causes the most bizarre phenomenon of a lunar rainbow! And if you’re a bit of an adrenaline junkie have you heard about Devil’s Pool? It’s possibly one of the scariest, yet most thrilling water experiences in the world. A natural pool, right on the edge of the plummet to Victoria Falls.

The word ‘great’ does not even begin to describe the sheer magnitude of the Great Barrier Reef. Spanning over 1,400 miles and encapsulating nearly 1,000 islands of which 3,000 reefs live, is the largest coral reef ecosystem in the world. It’s home to billions of fish, coral and living organisms, many of which are only found in this part of the world.

Carving around the Queensland coast in Australia, this enormous reef can even be seen from space! However, with this natural wonder comes a warning. Due to climate change, tourism levels and overfishing, this magnificent wonder is at a severe risk of being ruined. Storms, coral bleaching and ocean acidification are also adding to the threat. Many scientists believe that unless drastic action is taken soon, we will lose the reef completely which will affect both marine life and the human race living closeby.