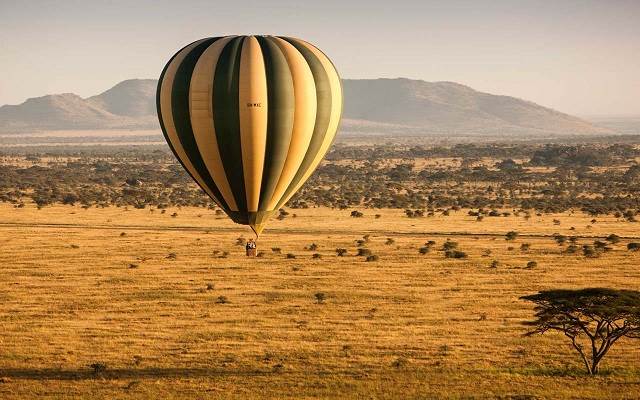 Tanzania (officially named, the United Republic of Tanzania) is located in the African Great Lakes region on the south-east coast of Africa. Tanzania borders Burundi, Democratic Republic Of The Congo, Kenya, Malawi, Mozambique, Uganda and Zambia.

Tanzania has a total of 29 airports. The international airport most popular with tourists is the Julius Nyerere International Airport (DAR) which is around 13km south-west of Dar es Salaam.

Home to a ring of sparkling islands, dry savannahs, rolling hills and of course, the big five, Tanzania is an adventure waiting to be had. Explore the immense Ngorongoro crater, the vast Serengeti – Africa’s most famous national park, and the vibrant coral reefs teeming with fish of every colour. It’s no wonder that a tour to Tanzania has always been high on the adventurers’ bucket list.

Tanzania has a rich, eclectic culture with traditions being an important part of everyday life. Tanzanians are well-known for their hospitality and friendliness – you will always be greeted with a smile!

Food is eaten with their hands but only with the right. The right hand is seen as the clean hand, which can be used for shaking hands and eating, the left hand is for ‘private matters’.

The correct way to greet each other in Tanzania is with a handshake (using the right hand) and a smile. As for dressing, generally people wear casual clothes unless at a top-end restaurant or bar. However, due to the large Muslim population in Tanzania, it is best to cover up arms and legs when you are away from the beach out of respect.

Tanzanians remain close with their family throughout life, holding the utmost respect for their elders who are thought of as a beacon of knowledge in life matters. There are still many tribes living in Tanzania, most famously, the Maasai Tribe. The Maasai people maintain their traditions, rituals and way of life. They live off their own land, farming cattle and crops and wear the traditional Maasai Tribal clothing.

If you accept or offer anything to a Tanzanian, make sure you only use your right hand.

The official language of Tanzania is Swahili with around 20 million people speaking Swahili as their mother tongue. Kiswahili is also commonly spoken as a second language. There are a further 126 ethnic languages such as Bantu and Nilotic. English is widely spoken throughout Tanzania, so if you speak English and learn a few key words in Swahili, you’ll get by fine.

The capital city of Tanzania is Dodoma, located on the edge of the Southern Highlands. Even though Dodoma is still much less developed than Dar es Salaam, Dodoma is Tanzania’s political centre. Dar es Salaam was the first capital city of Tanzania and still remains as the most prominent city in the country. Although, Dodoma does have lots of attractions to explore such as the Dodoma Cathedral and the House of Parliament. The population of the city is around 400,000.

Almost every nationality will need to obtain a visa in advance to travelling to Tanzania. You can also obtain a single-entry visa on arrival in the following airports – Dar es Salaam, Kilimanjaro and Zanzibar International Airports. The visa costs around $100 for US citizens and $50 for other nationalities. The standard visa will allow 1 month entry, however up to three months can be granted on request.

If you are arriving from an endemic area, you will need to provide a Yellow Fever vaccination certificate, before being allowed to enter.

The CDC and the WHO advise for the following routine vaccinations to be up to date when visiting Tanzania: Measles, Mumps & Rubella (MMR), Tetanus, Diphtheria & Pertussis (TDAP), Chickenpox, Shingles, Pneumonia, Influenza, Meningitis and Polio. They also recommend the following vaccinations for travel to Tanzania: Hepatitis A, Hepatitis B, Typhoid, Yellow Fever and Rabies.

Malaria is considered a moderate risk in Tanzania so we advise all travellers to consult their GP on the best antimalarial medicine for your trip. Dengue and chikungunya are also present in parts of Tanzania so make sure you are well-stocked with necessary DEET mosquito repellents.

Is it safe to drink tap water in Tanzania?

The tap water in Tanzania is not safe to drink as the sources are easily contaminated. Only use tap water for showering and washing, and bottled for drinking and brushing your teeth.

Electricity and plugs in Tanzania

The plugs and sockets in Tanzania are either type D or type G. A Type D plug has three round pins set in a triangle shape, and a type G plug has two flat pins and a grounding pin. The standard voltage in Tanzania is 230V and the frequency is 50Hz.

We always advise our passengers to save the relevant emergency numbers in case they are needed. The most important number to remember in Tanzania is 112. This will put you in contact with the police, fire and ambulance services.

Travelling as a single woman in Tanzania

Many solo female travellers have reported that on the whole Tanzania felt safe. The local people are some of the friendliest and most welcoming they’ve ever met and are always happy to offer advice, directions or help. Tanzania is a great destination for solo female travellers. If you’re looking to experience the great African safari, the majority of safaris are done on a group basis, perfect for solo travellers. Even if you decide to do a private game drive, you will still need to hire a guide to explore the park, so again you should be safe. The same goes for volunteer work. Africa has a huge volunteer community, so if you’re hoping to do some volunteer work, chances are you won’t be a solo traveller for very long!

Generally speaking, the more rural you travel, the less people are used to seeing females travelling alone, so you might get some extra attention. Men’s attitudes to women tend to be mostly respectful and forward-thinking, especially in the cities. However if you do strike some curiosity from men, the attention is usually quite harmless. That said, every country in the world has parts which are more dangerous than others. Like anywhere else you visit, always keep your common sense in check.

Here are a few tips for staying safe as a solo female traveller in Tanzania:

You can find internet cafes in all major towns and cities which usually cost between 1000-2000 TZS per hour. You will also find various wifi hotspots around the towns. However, the same can not be said for small villages and rural areas. Most mid-range to top end hotels and safari lodges will have free wifi, however, just because they have wifi, doesn’t mean the connection will be reliable. It can often be quite difficult to find a good, fast connection.

Dodoma is 3 hours ahead of London (GMT), 11 hours ahead of Los Angeles (PST) and 8 hours ahead of New York (EST). Tanzania follows East Africa Time (EAT) and does not switch to Daylight Savings Time. Visit timeanddate.com to calculate the time difference from your current location.

Renting a car is a popular way to travel around Tanzania, especially if you are travelling with a group. If there are at least 4 of you, it can turn out to be one of the cheapest modes of transport. Renting a car in Tanzania should be a relatively easy process, similar to renting a car in Europe. However, we only advise this as an option if you are a confident, experienced driver. The roads are often not paved and the traffic can be extremely hectic.

Unfortunately the taxis in Tanzania do not operate using a meter so you will need to negotiate a fair deal with the driver. It is best to do this before you get in the car. For short journeys around the town, expect the ride to begin at 2000 TZS or 5000 TZS if you are in Dar es Salaam.

Buses are the most popular mode of transport in Tanzania. There are usually two options. Small, locally run buses which frequently stop, but can take a long time to reach the destination, or coaches which are more expensive but make less stops, getting you there much quicker. Most of the time, you will need to purchase a ticket from a street vendor or kiosk.

Otherwise referred to as a Dalla-Dallas, these minibuses serve the immediate area and the nearby towns and villages. The price is fixed at 400 TZS per journey, so it is cheap to say the least! However, b prepared for a VERY full minibus which stops VERY frequently. The Dalla-Dallas don’t follow a schedule but leave once they are full.

Over 120 ethnic groups live in Tanzania (then called Tanganyika), most of which migrated from various places in Africa. Swahilis originate from a mix of Arabic, Persion and Chinese traders who arrived in Africa in the 8th century. Vasco da Gama, a Portuguese explorer discovered Tanganyika in the late part of the 15th century, taking the country under the Portuguese control.

From the late 19th century until the end of world war two, Tanganyika (along with Burundi and Rwanda) became part of the colony of German East Africa. After the German’s defeat in the war, The League of Nations and the United Nations mandates put Britain in control of Tanganyika’s administration.

Tanganyika became independent in 1961, when Julius Nyerere became president. He remained in power until 1985. Later that year, Zanzibar and Tanganyika joined to form Tanzania.

In 1979, Tanzania gave support to anti-apartheid movements in South Africa and helped to overthrow the Amin regime in Uganda. Then in 1985, president Nyerere was replaced by Ali Hassan Mwinyi. He helped build the economy and made positive changes to the constitution.

In 1995, the CCM (Chama Cha Mapinduzi) won the election and appointed Benjamin Mkapa as president. In 1998 Tanzania came under a major terrorist event as the US embassy in Dar es Salaam was bombed. The CCM continued to win subsequent elections, however were accused of cheating the system when their new candidate Jakaua Kikwete won in 2005. The opposing parties eventually negotiated a power-sharing agreement which enabled more peaceful elections to ensue in 2010.