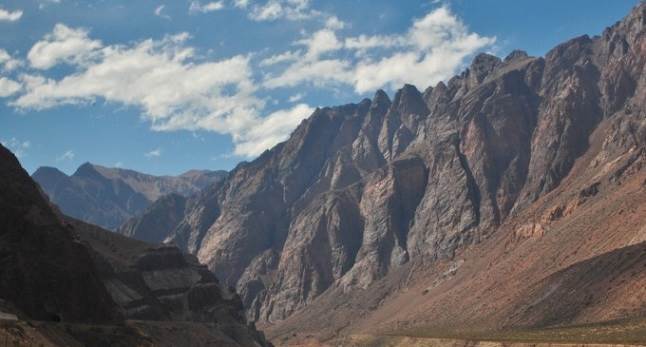 Bus journeys are rarely very exciting, especially ones that take up the best part of the day. But last weekend, I undertook the most spectacular journey I can remember, along the winding road over the Andes from Santiago to Mendoza.

Last weekend, I made a brief trip from Santiago to the Argentina city of Mendoza to visit a couple of friends who were traveling north through the continent. As excited as I was to see my friends, I was particularly unenthusiastic about the prospect of the six-hour bus ride each way. While in South America, six hours on the bus is considered to be a relatively short and painless journey, back in my native England, you could travel up through most of the country on a similar length trip, and it is generally a daunting and arduous prospect, with some very uninspiring scenery along the way of cows, farms, and the occasional grey dreary town in the middle of nowhere.

With this in mind I brought with me an array of entertainment, including three books, an iPod full to the brim with music, videos, and writing materials. Much to my surprise, however, almost none of these diversions were necessary, as it was easily the most spectacular bus journey I have ever taken.

We set off into the Andes, weaving between sprawling mountain peaks on our narrow, winding road. Jagged cliff faces towered above us, with streams and rivers of fresh mountain water flowing to our side. Sometimes the sun would hit the ragged rocks and boulders on the mountain peaks at just the right angle to create a dramatic shadowy effect down the side.

Occasionally we would turn a corner to be confronted with a view stretching on for miles into the distance, with snow-capped peaks on the horizon. It was weird to think that this serenity and incredible scenery could exist so close to the smoggy urban metropolis of Santiago.

For the return journey, I was possibly the most excited one can be about sitting on a bus for the majority of the day time. The previous night I had eaten an absurd amount of Argentine steak at my hostel’s regular Sunday asado, where it seemed as though they cooked an entire cow’s worth of meat, and so I was still rather full and ready to recline in my comfy chair and take in the beautiful scenery from the other side of the bus. I now thought of the bus ride as a mini tour of the Andes, as opposed to an actual journey to with the sole purpose of reaching a new location.

I was not disappointed the second time around, as we made our way along the steep, newly constructed roads up to the border, where we were able to get out and take in the cool, fresh mountain air, with huge peaks looming above us. It was almost surreal when we came to leave the spectacular scenery and arrived at the bus terminal in Santiago only half an hour later.

Overall, the Santiago-Mendoza route is definitely the most pleasant bus journey I can remember undertaking, and I would certainly look forward to when and if I do it again. I would even go as far as to recommend taking a weekend trip to Mendoza, if only for the unforgettable journey there.