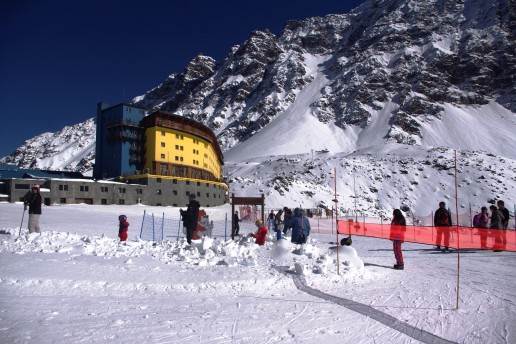 Many foreigners in Chile are all too familiar with the high mountain road to Mendoza, Argentina.  As the foreign city nearest to Santiago, Mendoza is the premier destination for expats to renew their Chilean tourist visas every 90 days.

Halfway along that voyage, the Mendoza-bound may get a glimpse of a small yellow building situated in the center of a breathtaking ring of snow-capped peaks.  A closer look reveals the presence of ski-lifts in all directions.  The most notable, of course, being the one that stretches directly over the road upon which they are traveling.  In a heartbeat the image is gone, the tiny building is once more swallowed up by the colossal Cordillera de los Andes, and the unknowing border-jumper is left wondering what it was they had so briefly seen.

The answer is Ski Portillo, one of the great treasures of the South American winter sports experience.  Tucked away in a truly extraordinary pocket of the Chilean Andes, Portillo is homage to what skiing used to be, before the sport’s explosion in popularity inevitably left it vulnerable to corporate sterilization.

Portillo’s owner, Henry Purcell, first came to Portillo in 1961 after his uncle had purchased the hotel from the Chilean government and found it in a state of shoddy disrepair.  Since then, he has built it into a resort of nearly legendary status.

Portillo has been able to resist the emotional disconnect between guests and staff that plagues its competitors, and has flourished in doing so.  In fact, it is precisely Portillo’s resistance to change that has been the key to its success and earned it the reputation for being a truly remarkable experience, one that is altogether different than that offered at any other mountain resort in Chile.

I had the opportunity to visit Portillo on opening day of ski season and talk to some of the people who have helped make it the phenomenon that it is today.

Greeting visitors from the road, the sunny-yellow Hotel Portillo radiates a cheerfulness that can be felt throughout the entire resort.  Stepping into the lobby, I was immediately struck by its coziness, not only in the old-fashioned wooden décor but by the way I was received by the hotel’s staff.

This was my first surprise.  I can’t remember the last time I felt like the center of attention at the post office, let alone at a world-class ski resort.  Throughout the course of my stay, I learned that this was the entire modus operandi of Ski Portillo.  From the ladies changing the sheets, to the gents adjusting the bindings on my board, to the maître-d’ and ski instructors, every employee of Portillo lives and works as a single team dedicated to making guests feel warm and welcome.  With a staff-to-guest ratio of 1:1, Portillo’s reputation for offering “cruise ship” service is indeed well-earned.

Stepping out any one of the hotel’s doors puts you directly at the base of the mountain, so visitors are never more than five minutes away from the lifts at any time.  This allows skiers and snowboarders to take the morning at a relaxed pace, rather than the up-at-dawn frenzy to be first in line that many skiers are sadly accustomed to.

Out by ski school, I ran into Mike Rogan, the Director of Operations at Portillo.  Mike has been part of the Portillo family since 1989, after working as a ski instructor in the United States, Australia, and New Zealand.  He first discovered Portillo during his yearly escape from the North American summers, and immediately fell in love with it.

“Visitors here at Portillo can have an experience that doesn’t exist anywhere else in the world.  I couldn’t imagine working anywhere else,” he said.  “If I could ski year-round here to Chile, I would seriously consider giving up my North American winter.”

Mike is a die-hard skier through and through, of the rare variety that flip-flops from hemisphere to hemisphere looking for the elusive year-round winter season.  Having skied at resorts throughout South America, he recognized right away that Portillo was something else entirely.

“I’ve been to other ski resorts, and they’re just not the same,” he says as he gazes out on the centerpiece of Ski Portillo, the obsidian-black Lago del Inca, or Lake of the Inca.  “I’m certainly biased and I’m not ashamed of it.”

A morning of riding down the freshly-groomed trails reminded me of why snowboarding in the Andes is so extraordinary.  Far above the tree line, few things stand out in the ocean of white that surrounds you.  Large rock clusters and the numerous false horizons are trademark features, and the sheerness of the peaks surrounding Portillo gives them a truly ominous presence.

Back inside after a stellar three hours on the mountain, it was time to warm up, dry off, and chill out.  Like the rest of the hotel, a gigantic living room on the third floor positively oozes comfort and offers a welcome respite for aching bones and cold noses.  Chairs, couches, and tables are abundant, and the large fireplace at the far end of the room gives it a rustic, alpine feel.  Strong wooden furniture with thick, soft upholstery offers a place for kids to unwind while their parents relax, and the wide assortment of games and puzzles is more than enough to keep childish minds occupied.  I had the distinct feeling that the design and layout of the room was crafted by generations of trial-and-error experience.  It was remarkable it was to spend a full half-hour in a room with at least two dozen kids without hearing a single raised voice or unhappy tirade.  Clearly there was some kind of magic at work.

At lunchtime, my grumbling snowboarder belly was about to meet its match with Portillo’s renowned cuisine.  Continuing into the main dining room, it was clear that the food service aspect of the hotel was in the hands of true masters.  The clamor of hungry guests was instantly drowned out, not only by the elegance of the table settings but by the machine-like efficiency and sheer speed of the dining staff.  Busboys dressed in white worked seamlessly around waiters dressed in red, setting tables, taking orders, pouring drinks, and delivering the goods.

As I sat down at the table and was immediately handed their top-notch wine list, the master made his appearance.  Dressed in a fantastic navy blue suit and bright orange tie, maître d’ Juan Baize greeted us with a charm and charisma usually found in the movies.  His stark friendliness was somehow both personal and professional, and added even more class to a dining room that did, in fact, remind me of a cruise ship.

The menu offered something for all tastes, including numerous vegetarian options. It was truly painful to have to limit myself to only one entree.  The Hotel Portillo is famous for its food, which came as no surprise after the three-course delicacy in which I absolutely delighted.  The kitchen is run by master chef Rafael Figueroa, who delivers the best of everything from grilled lamb chops to steamed tofu.  After lunch, I sat down with maître d’ Juan, who explained that the clockwork efficiency of the kitchen and dining room is of the same vein as the rest of the hotel, thriving on a genuine sense of camaraderie among the staff.

“Rafael and his team are very good together,” he grins. “The kitchen crew and the dining room crew work as a single unit.  In other restaurants, the two are almost never together.  Here, however, they interact flawlessly, even when problems arise.  The friendship is perfect.”

Juan has worked at Portillo, during the summers as well as the winters, for forty-five years.  He has seen three, sometimes four generations of visitors and staff come and go over the decades.  Juan is an essential part of the history of Portillo, and knows the inner-workings of the hotel as if he had built it with his own two hands.  The sense of familiarity, he confirms, is the key to Portillo’s success from the bottom all the way to the top.

“Henry is the head of the hotel, and the chief executive.  Miguel is the general manager, and Mike Rogan is in charge of operations.  There is a deep friendship between all three of them, and no one of them is more important than the other.”

This is precisely the kind of approach that Juan takes with the hotel’s guests.  “It doesn’t matter what our guests do or how much money they spend,” he says, pointing at various guests around the room. “What makes me any more important than him or her?  Here, we treat everyone equally, as friends.  The moment that stops being true, everything will fall apart.”

Juan keeps to this principle absolutely, and has applied it to everyone he has encountered over the years, from Turkish princes to assorted Kennedys.  As he shakes my hand, I can sense his countless years of experience dealing with people of every imaginable variety, and an expertise that is truly rare.  Few indeed can claim to have uttered the phrase, “Pardon me, Mr. Castro, but I believe you’ve dropped your gun.”

That evening, I got a chance to talk to the man himself, Henry Purcell, and his son, Miguel.  His office, adorned with ancient-looking ski artifacts and photos of his family, gives the impression of both a place of business and a quiet place to chat with friends.

“When I first arrived in 1962, the place was in really bad shape,” Henry tells me.  “The previous owners had gone bankrupt and the personnel had stolen everything they could get their hands on.  It was greasy and black, with no paint and big cracks in the walls.  The caretaker lived in the living room in front of the fireplace with his pet sheep.  This is what I found when I walked in the door.”

Henry had a lot of good people helping him, however, and they got to work immediately restoring the hotel to its previous state.  In 1966, the Chilean government decided to host the World Ski Championship.  “This really helped put us on the map, and let people know that you could actually ski in South America,” he says.

Miguel, now general manager, grew up at the hotel.  He shares his father’s vision of keeping the skiing experience centered on the family, and making their guests feel like part of the Portillo family itself.

“On some occasions, we have nearly two hundred kids staying at the hotel,” Miguel says as his daughter pokes her head through the door of the office. “Any employee who doesn’t like kids doesn’t last very long,” he smiles.  Just then, she crosses the room, jumps onto Miguel’s lap, and starts playing with the scotch tape on his desk.

I can’t help but think that one day this office will be hers.

Portillo is a total different experience from anything in Chile.  There are no enormous hotels.  There are no towns, shopping malls, or clubs nearby.  People come to ski, and they come with their families.  It’s not the large commercial center that many people think of when they picture skiing in other parts of the world.  Portillo is what skiing was in the 1940s and 1950s, and the Purcell’s have no intention of changing that.

“As long as the public stays with us, we’ll keep doing it this way,” Henry says.