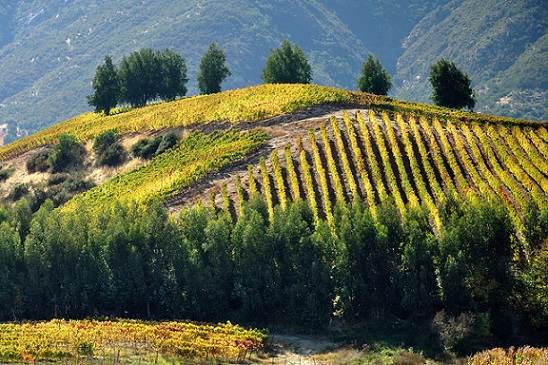 Pilar Jorquera has a very busy schedule nowadays, preparing with her foundation “Chilean Race” of what will be the Second Gastronomy and Costume Roots Fair at the Colchagua Valley, to be held at Santa Cruz. This will be an activity which will be open to general public and that will unite chefs, cuisine cultivators, agricultural producers and the valley’s inhabitants, all together to rescue and develop their cooking, encouraging production and tourism. A unique opportunity to taste and learn from the most traditional to the most sophisticated of Chilean cuisine. All of it poured by the product of the several vineyards that are part of the so-called “Wine Route”, surrounded by cultural activities that, this year, include a Roberto Matta exhibit.

Ostriches, pheasants, frogs and cereals represent some of the zone’s new productions and are the stars of the culinary offers of the Gastronomy and Costume Roots Fair at the Colchagua Valley, whose second version will be held in Santa Cruz between January 17th and the 19th. An event in which the best cooks will work with the most remarkable chefs of the Les Toques Blanches: Luis Levera, Joel Solorza and Guillermo Rodríguez, plus other national and international guests. To take advantage of their own resources and project new products, are two of their main leit motivs. The goal is to “reinforce what was done last year, in terms of gathering, distributing and promoting information, including recipes and products”, says Pilar Jorquera de Cardoen, Chilean Race Foundation’s president, who organizes this event.

All within a wide context of costumes and expressions, that include, among other things, handcraft stands, food for sale, dances and music by the National Folkloric Ballet, besides lectures and cooking classes open to the public. “We want to be an window of the Valley, to enjoy and offer good tourism”, says Jorquera. The Galería Animal will be integrated with an exhibit of paintings, drawings, and sculptures by Roberto Matta at the Santa Cruz Plaza Hotel. Curator Tomas Andreu will also dictate a lecture about the artist’s life.

“All that is art has to be learnt. You have to learn how to eat piures (type of seafood), the same you have to learn how to listen to opera”, thinks Pilar. Using all the knowledge of the producers and taking part in local events such as the Pumanque Fair, the organizers of this have gathered tips and recipes that inspire the chefs and guide local production.

One of the products with the best projection is quinoa, of which there are 1,400 acres already planted at the Valley, and has started being exported to Asia. “The quinoa producers are developing recipes for making bread and desserts”, adds Pilar. Another meat that is starting to be used at international restaurants is that of the ostrich, which is raised at this zone. The promotion of the gastronomy and original products is part of a largest project that wants to promote the tourism at this zone, where the Cardoen family is a structural part. They own the Santa Cruz Plaza Hotel, the Colchagua Museum and the Vichuquen Museum. With her Foundation, Pilar Jorquera has committed a lot of resources, time and work. “At the hotel we have developed new and more sophisticated recipes with local products, to present them in the book The valley’s flavors, which will be edited in April”.

The millionaire project “Wine Train” is now on hold because of the change in the direction at the State’s Rail Company. It represents the master plan of this crusade, and integrates -through the train- the wine route with different towns and villages near the valley, from San Fernando to the Pichilemu coastal town, with all their traditional handcraft and gastronomy in a tourist itinerary with no precedent.

“The idea is that every station has an offer of traditional food and handcraft, and we are interested that they may incorporate new local products. For instance, cakes made of quinoa”. Still without the train, the trip -not longer than two hours from Santiago- is worth it for more reasons than the gastronomy meeting, the wine route or the Matta exhibit. The Santa Cruz Hotel, the Colchagua Museum, the Huique Museum, the Chimbarongo basketwork, the beautiful colonial towns of Pumanque, the Pichilemu waves ideal for surfers and, in Vichuquen, the Museum with the Violeta Parra’s textiles are some examples.

The second week of January starts the threshing with mares from Santa Cruz. It is a complete popular holiday.

Colchagua taste
The so-called Wine Route is formed by all the Colchagua valley vineyards, which open their wine cellars to the public with guided visits. It extends around Santa Cruz, Palmilla and El Huique. The itinerary includes two or three vineyards in one day, and people can have lunch in any of them. Information and reservations at the Santa Cruz Plaza Hotel (56-72-821 010).

It was donated to the Army by the Echeñique family. The Huique Museum is a ranch with a summerhouse that resembles a palace, completely adorned and conserved as in the 18th Century.

Violeta at the lake
The Vichuquen Museum, at the border of the lake of the same name, is owned by the Cardoen Foundation. It is a local museum, with an archeological profile. There, the second week of January will open the exhibit of the textiles made by Violeta Parra.

Giant birds
Around Litueche they are raised the ostriches.

Time tunnel
Cardoen Foundation’s Santa Cruz Museum has one of the country’s most important pre-Columbian art collections and the largest amount of amber with fossils. According to a chronological script, it shows a very particular Culture History that starts with the first traces of life found at the sea, till reaching the weapons used during the Second World War, going through Pre-Columbian cultures, the Conquest time and the development of press and communications. This last aspect is the main issue of one of the five halls just inaugurated, the one of Modern times. The other four belong to the Chilean hall, where one can find topics such as the “huaso” (Chile’s peasant) origin and his suit, the making of the spurs and shawls, the weapons hall, the carriages and train station hall, which includes a train completely adorned.