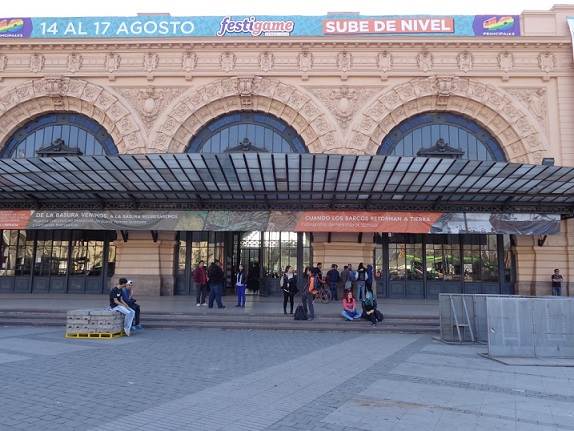 The Santiago Freak Tours are as alternative as they sound. The company was founded in 2011 and offers a new approach to how tourists and locals alike view Chile’s capital. People can enjoy unique excursions that present the “B-side”of Santiago’s past, present and future, like their recently launched “11/9, 1973″ tour, an emotional minute-by-minute look back into one of the most pivotal days in Chilean history.

SANTIAGO — What makes this tour group unique from others? Considering the type of tours that Santiago Freak’s offers, there’s simply no other comparable service in the city.

What’s more, these tours are by no means intended only for the tourist: every single Santiaguino on our tour (as context, I was the only gringa) commented on how they had no idea these stories, these people, had existed in the place they call home.

Calling it a tour feels like an unjust definition of the experience–on a Santiago Freak tour they revive stories of a past and put them in a context for accessible understanding.

On that note, I’d commend the “Santiago Freaks” first for the historical richness of their tours, such as the “Paranormal” walking tour, which I was fortunate enough to try–or their upcoming “11/9, 1973″ excursion, which they are hoping to open to the public this month—just in time for the upcoming commemorative holidays.

Unlike their walking tours, the “11/9, 1973” is one of Santiago Freak’s thematic trips, which take guests around the city in a van, due to the distance of the tour’s stopping points.

More importantly, this particular excursion takes guests back in time, minute-by-minute through a monumental day during one of the most polarizing periods of Chilean history: the coup d’etat against Salvador Allende and the start of the military regime under General Augusto Pinochet.

According to the General Director of Santiago Freaks, Víctor Román, “The tour is structured so that we can go through and relive what happened on that day. It’s a very emotional tour—it’s strong—but at the same time it’s very interesting because we try not to involve political sides but rather peoples’ experiences, peoples’ stories. That’s ultimately what we want to achieve.”

Among his accolades in the tourism industry, Mr. Román is also invested in education, as a professor who organizes and directs seminars on Education and Tourism in Recoleta Domínica involving Professional Technical Schools, CFT, IP and universities that provide careers related to tourism. He was also a major contributor in the development of ACAL (Outdoor Curricular Activities), which is an educational program that evaluates final exams for students studying tourism, and aims to strengthen technical skills in students.

His passion as a “Santiago Freak” is perhaps an effect of his role as teacher; after answering my question about upcoming new excursions, he continued with an explanation of the upcoming “Boho” trip.

“Santiago Boho is about revival, the Golden Age of the 60’s in Santiago, when it was a city that didn’t sleep – you had parties, celebrations everywhere, and it was happy city and a bohemian city–those stories you can still see in different buildings, and it’s what we bring to life again.”

He adds enthusiastically, “the nightclubs of Santiago, the magazines, and show biz and lights– it’s nostalgic, only in Spanish [for the time being], and lasts four hours during the night around Santiago. People will find out how the high classes of Santiago used to party and hang out, what were the most popular places that they used to go all the time, and contrasting that with the working class parties and typical venues.”

The time length of the Santiago Tours is also of relevance—when they first told me the Paranormal walk would last three-hours, I admit I had a little trepidation. But it really works out in your favor.

First, because the small group size and time length of the tour allows everyone to shake the nerves out and get to know each other while learning.

“We have a maximum capacity of eight people per excursion, minimum of two, maximum eight— Why? Because we provide a lot of information, because the tour has a lot of content, and to have more than eight people makes a potential client fail in getting all the information they need to hear; in those cases the experience–we wouldn’t get what we wanted,” explains Mr. Román.

And an intimate experience we had. I would, for example, recommend this tour for anyone who is by themselves and interested in getting a fresh perspective of Santiago.

Our group for the Paranormal tour turned out to be a sarcastic, peanut-gallery bunch, and our tour guide Marco kept up with the best of the night’s comments.

After an hour of walking together, our group felt like a tight unit, and by the end of the night as everyone parted ways I found myself thinking “aww, that’s it.. well goodbye!”

The guides are also an instrumental component to making Santiago Freak’s tours a consistently worthwhile experience. When asked what are the requirements when selecting his Santiago Freak guides, Mr. Román replied immediately—“they have to love the city.”

He continued, “Each one of us has a place in the city and that’s what we are betting on by doing this kind of tour. It’s about getting to know each other and to have a nice time in the city, and occupying public spaces that are normally not habited.”

I was blown away by our guide, Marco, and his ability to not only remember three-hours worth of historical facts, names and dates, but to be able to do so in his second language with such contagious enthusiasm for the duration of the tour.

It was only fitting when he told me the reason he joined the tour company was because he “fell in love” with his first tour as a guest, and quickly sought a position in the company.

And that’s what sets these guides apart–they are not only knowledgeable about Santiago, but they want to know more.

As we made our way through Bandera street near Plaza de Armas, one member of the group asked quizzically about a worn but nevertheless beautiful façade, to which Marco responded with frustration, “Ah yes, we have tried to find more information about what happened in that building, but no one,” emphatically swiping his arms in a crossing motion, “appears to have information on it.”

Marco left me with an impression that for the “Freak” tour guides, this isn’t about regurgitating facts, but a constant search of a new story to discover about Santiago.

A second reason why you shouldn’t balk at the time length is because, right when the thought of a pick-me-up creeps into your mind, you find a table full of complementary tea/coffee, brownies, cheesecake, and little dishes of cookies awaiting you in a quiet café.

“We have a whole day of touring and visiting places, having lunch, we have two or the places where we plan to meet, but the whole eating part is covered by us–that’s part of the tour package,” confirms Mr. Román.

Without wanting to ruin the surprise, I’ll briefly mention the “interventions” as a final unique feature that one may come across during an excursion with the Santiago Freaks.

When I asked Mr. Román about the woman on our tour who suddenly appeared in a white colonial gown bursting forth in a dramatic soliloquy of her tragic death, the director smiled and said, “Those are the interventions. We are the only ones that makes this kind of walking tours with these themes and these interventions. In the walking tour ‘Origins of Santiago’ we also have interventions [trained professional actors/actresses] that are characters connecting the story –and that’s the idea— so that people can relive those stories all over again.”

Relive indeed. It’s clear the tour company enjoys the challenge of creating a thoughtful, fresh perspective on Chile’s fair capital, as Mr. Román left me with his last insight:

The team is permanently coming up with news ideas. We are preparing for a tour, it’s a new experience, called Santiago Consciente [“Aware”], by doing this we are going to be more conscious of and making conversation and talking and sharing tea or coffee or a park and talking about ourselves, about our dreams, about what makes us happy what makes us sad what we want to become, it’s a very intimate thing because we want to look at Santiago from another angle than it is right now–everyone’s running around all the time–and we want to make it more enjoyable. Make it feel more around/whole.