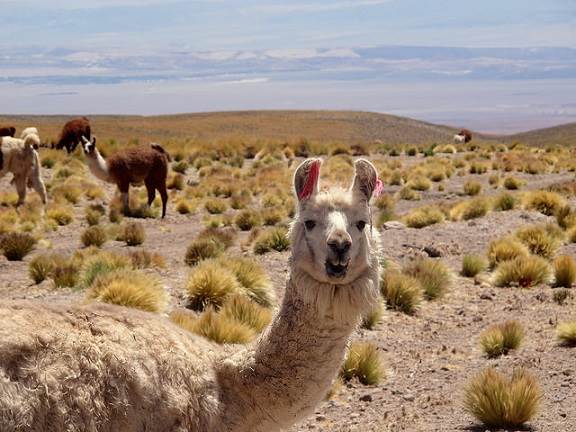 During the summer, Chile’s North most important destination can not be out of one’s plans. There are enough reasons to visit the town of San Pedro, a live testimony of the Atacameña culture.

The fact that it appears in any guide and that there have been hundreds of articles printed, does not excuse us from not telling something else about Chile’s North main tourist destination for foreign travelers: San Pedro de Atacama. A small and old Andean town in the middle of the world’s driest desert, with only 955 inhabitants, and houses that have become hotels, restaurants, pubs, travel agencies and even art galleries. The tourist offer knows how to take advantage of the important natural and cultural heritage; developing, for instance, local gastronomy and architecture, plus natural medicine. Foreigners are drawn to a place with a mystic prestige.

Located 7874 high, in an oasis at the Northern border of the great Atacama Salar (the country’s largest) and just an hour by car from the city of Calama, Second Region, San Pedro is a mixture of treasures kept at its museums, several archeological sites, spectacular landscapes, architecture, costumes and the whole universe of pre-Hispanic traces from the Atacameña tradition, that can be seen and breathed under one of the world’s most luminous and sharp skies. Pre-Hispanic capitalShaped, like many other oasis, by the rain of the “Bolivian winter”, San Pedro sometimes shows an exuberant vegetation, with trees such as Chañares, Algarrobos and Pimientos. In its green fields, agriculture has been practiced since ancient times, and has conserved the same methods used thousands of years ago. A miracle that the Atacameños credit to Mother Earth (the “Pachamama”), expressing their thanks through holidays, and religious ceremonies that combine the catholic and the Andean rituals.

The town has gained its population during approximately 10,000 years. As the center of the Atacameña culture (or Kunza), it was coveted by the Tihuanaco and Inca empires, because of its mineral wealth and its importance as a way of access to the commerce at the desert. Conquered by the Incas during the middle of the 15th Century, it was later a place of transit for the Hispanic expeditions to the South of the Continent, including that of Diego de Almagro in 1536. Until the year 1870, when the operations moved to Calama, San Pedro was the administrative and commercial center for the copper mining, which deeply helped to its economical development. Today, its scarce inhabitants live mainly from tourism and the cultivation of vegetables.

The archeological Museum of Padre Le Paige, the Colonial church and the easy access to the geysers of “El Tatio”, the Moon Valley, the pukara of Ouitor and the Pre-Hispanic village of Tulor are the main tourist attractions. There are also the ruins of Catarpe, the Atacama Salar, the Los Flamencos national reservation, where one can appreciate the rich fauna that lives in this inhospitable places, and the neighbor towns of Toconao and Socaire, with all their rich ancestral importance.

San Pedro de Atacama Church
The Church of San Pedro de Atacama, nominated as National Monument in 1951, is the largest of this zone and one of the oldest churches in Chile. It is located at the side of the central square, surrounded by ancient pepper trees. Of an Andean style, built in adobe, there stands a fence also of adobe, raised in 1978. The beams are tied with leather straps and the roof has small boards made out of cactus, mud and straw. The walls were built in 1774, but were repaired between 1839 and 1843, after a fire. The adobe tower was added in 1964 and replaced a previous one built on wood.

Founded by the Belgian priest Gustavo Le Paige, the Archeological Museum that carries his name shows the evolution of the Atacameña culture through more than 11,000 years, with a valuable collection of Andean archeology which includes, among other things, ceramic pieces, dresses, tools and mummies, of which the most famous is the one found at the desert and baptized as Miss Chile.

The history of the Museum goes back to 1955 when Le Paige established himself in San Pedro for his pastoral work. In parallel he dedicated to the study of the Atacameño past. Walking through villages and cemeteries he got to gather the material that is now kept at the parochial house. With the help of the local community, the priest gathered adobes and started the building of a place where to exhibit the pieces, and then got the support of the Universidad Católica del Norte, then administered by the Jesuit order. Even though his huge tourist potential and its patrimonial value, the institution has not been able to get the necessary finance to work at a proper level. An investigation laboratory and new exhibit rooms are now the most urgent needs.

Anyway, the community valorization of this museum and its importance in the region’s cultural and academic life has made possible some important initiatives. One of the most interesting is the “Andean School”, which looks to give young people of an Atacameño origin the care and administration of archeological sites inherited from their ancestors.

Quitor Pucará
Close to the town there stands a number of “ayllus”, and the Quitor Pucará, built in the year 600 a.C. This pucará is placed at the base of a hill, at the border of the San Pedro river. The constructions were built on red stone as a defense, to protect the people, their agricultural activities and the food. At this pucará there was the Siege “of the headless”, guided by Francisco de Aguirre during the Spanish Conquest, in which atacameño war chiefs were decapitated as a sign of force to the foreign army.

This zone is characterized by its density and archeological age, more than 3 thousand years old. The village was buried by the sand of the Moon Valley. Most of the ruins are covered and only four per cent of the construction has been excavated, so one can only speculate about what hides under the sand. It is believed that there are about thirty circular rooms interconnected among them. The hard access to the village has helped to protect it from the pillagers. Even though Tulor is a great reference for atacameña archeology, it is not the only one. There are a lot of other sites that are just being investigated and some other that remain hidden in the desert.

Moon Valley
25 miles from the town there is the Moon Valley, at the Salt Mountains. As it name suggests, the shape and colors of the rocks there resemble the moon surface. To see this place during dusk is and incredible and awesome spectacle.

Over 14,107 feet high, the Tatio geysers are a unique spectacle, one that goes along with the view of the vizcachas and vicuñas, and thermal baths. There is a great fluctuation on temperatures, from 14 degrees Farenheit before sunrise and 68 degrees Farenheit afterwards. At around 11482 feet high, there stands Puritama, a thermal river with water around 100 degrees Farenheit and that is surrounded by a rocky canyon, where there are still cultivation terraces with ruins.