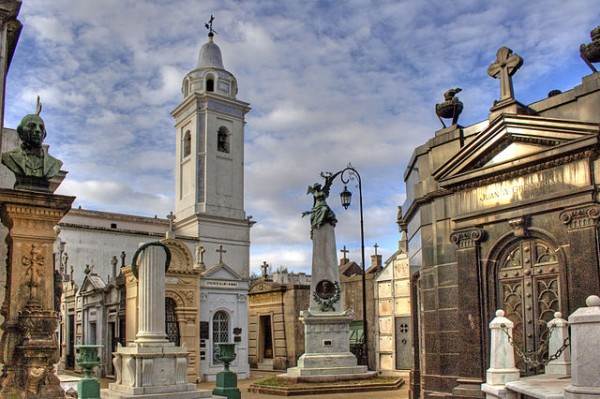 Buenos Aires is often described as a little piece of Europe at the bottom of South America. This beautiful city has a lot of European architecture with a mix of styles from France, Spain, Italy, Germany, etc. One of the architectural highlights of the city was designed in 1822 by French architect, Prosper Catelin. It’s not a museum or a government building; it’s not even a elite home or school. One of the architectural highlights of Buenos Aires – a cemetery.

The Recoleta Cemetery is one of the most visited tourist sites of Buenos Aires. The whole area around the cemetery has become a favorite location of international visitors and is home to many of Buenos Aires’ best hotels and the city’s embassies.

A great way to visit the cemetery is to approach on foot. You can walk along the wide avenue and observing the tall walls that hide the cemetery on one side and wonderful little coffee shops and restaurants on the other side.

La Recoleta Cemetery is open most days from 8am to 6pm and has free admission. You can also opt to take a free English tour of the cemetery where you will learn more about it’s history and famous residents. The History of the Cemetery

This area of Recoleta has been a religious site since at least the early 18th century when the monks of the Order of the Recoletos built their convent and church, Our Lady of Pilar. In 1822 the garden of the convent was converted to the first public cemetery in the city of Buenos Aires by the Governor and the layout was designed by French architect Catelin. Since then the cemetery has only been remodeled once, in 1881, by an Italian architect. Both European design influences can be seen in the cemetery design and layout.

While the Recoleta Cemetery was the first public cemetery, it is primarily filled with the famous and elite families of Buenos Aires history. There are over 6000 tombs in the cemetery, all above ground. Many mausoleums contain the remains of whole families and multiple generations. The tombs range in styles from Art Deco to Neo-Gothic. While many of the mausoleums are well cared for and in pristine shape for their age, a few have been left deserted by families that have moved away from Buenos Aires or died out. As you wander the “city” like avenues and streets of the cemetery, keep an eye out for these famous Recoleta residents.

General Juan Lavalle – Both a general and a governor of Buenos Aires, the General’s tomb is notable for its military design motifs and the carved military guard standing watch outside the tomb.

Evita Perón – One of the most famous and loved women of Argentina, Evita was the First Lady of Argentina before being entombed in Recoleta. Her grave is still visited daily by crowds of admirers and is the most popular tomb in the whole cemetery.

Admiral Guillermo Brown – Also known as William Brown, this Irish-born Admiral was the founder of the Argentine Navy and has a tomb that respresents that fact well. Besides the sea and sailing carvings, the mausoleum was actually in part build with melted down bronse from the canons of the battle ships he once commanded.