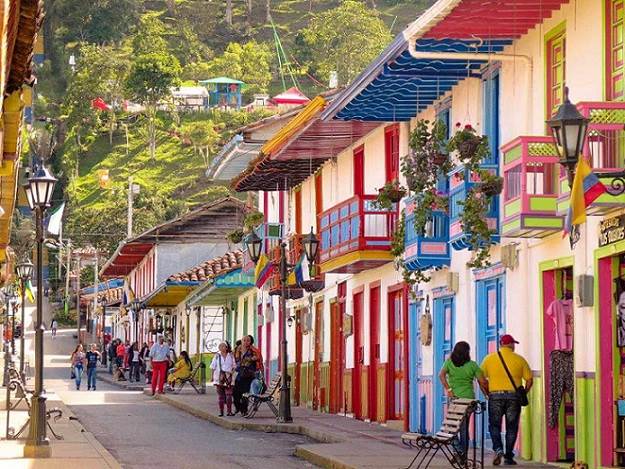 A flight delay and a missed connection were to blame for my first visit to Colombia. The visit was a short 14 hour trip to the slightly chaotic, somewhat gloomy Bogota. The airline offered me a hotel for the night and an old friend in town picked me up to take me to the bi-yearly Iberia-American festival of Theatre that was taking place at the time.In that one night I was not only introduced to some exceptionally funny shows on the many stages, but also live salsa bands and was given a short introduction to what I am sure are the friendliest and most welcoming people in the world.

I was hooked, from day one.

Of course, I’ve been back more times than I remember since then and have been very lucky to see many sides of this magnificently diverse country. Colombia is a country of diversity and contrasts. From paradise beaches on the pacific and Caribbean coasts, to the gigantic metropolis of Bogota in the high Andes, to the deserts of Guajira to the lush green and virgin Amazon jungle of the south-east, Colombia has so much more to offer than Cartagena and a good cup of coffee.

One of the places that has particularly captured my interest during my visits to Colombia is the incredibly charming town of Salento. Salento is the oldest town of the department of Quindio. During colonial times the town was a main stop on the route between Popayan (south) and Bogota, but Simon Bolivar ordered a re-route/upgrade to the road during the 1830s by-passing the settlement. The town was left untouched for many years and never caught up with modern day development of the rest of the country. The small community of some 300 people at the time grew stronger and today we’re left with this gem of history. The town has an approximate population of 4000 people today.

Salento is situated centrally in Zona Cafetera, the coffee region of Colombia some 8-9 hours from the capital by road. The route is not ideal for those with a weak stomach, but the drive through the Cordillera Central is spectacular and well worth the small intestinal twists that your body might be put through.

The coffee region is full of brightly coloured fincas (ranches/country houses), houses and churches, each with accompanying porches and/or balconies. The architecture and exceptional use of the native giant bamboo (in recent years made famous worldwide by architect Simón Vélez) is its own chapter, but no place is quite as alluring and complete as Salento.

Things to do in Salento:

EAT (STREET FOOD): Mazorca – corn on the cob with butter and salt. Cheap and delicious.

EAT (STREET FOOD): Arepas de mais – a type of cornmeal bread, but these are incredibly addictive. They are made simply with corn flour, a little oil, water and a lot of love. They should be cooked on hot coals and then have a coat of butter and even a generous layer of cheese, yum!

EAT: Trout – local speciality in Salento from the surrounding rivers. Get a trout “a la plancha” (grilled) and make sure it’s served with a generous side of patacones and you can’t go wrong.

DO: Get yourself on the back of a Willy – The Jeep Willy first made its way to Colombia in the 1940s as a military vehicle but quickly became very popular with the coffee farmers due to its very sturdy nature and ability to drive in the mountainous terrain. The vehicles are still used today in the region, for all types of farming, and in Salento you can jump on the back of them to go to Cocora as a means of public transport.

DO: Coffee tour – there are countless of them and they are certainly something not to miss. Visit an estancia/functioning coffee farm and learn everything about the process of the black gold of the region.

DO: Play Tejo – The game must be the second national sport (after football). In short it consists of throwing a metal puck of about a kilo along an approximately 15-20m track or field aiming for the gunpowder covered centre. You hit the target, similar to a bull’s eye in darts, and you score big. Additionally to the big bang, you will get cheers from everyone around, lots of cheers and pats on the back. A great sport and very popular with all Colombians.

DO: Salto de La Cruz/Salento Viewpoint. Some 200 steps and a sharp rise up the mountain will quickly get you to the viewpoint of the city with the very impressive views of the small town and the surrounding areas. You can see the yellow and blue steps from the Bolivar Square. This is an activity best on a clear day.