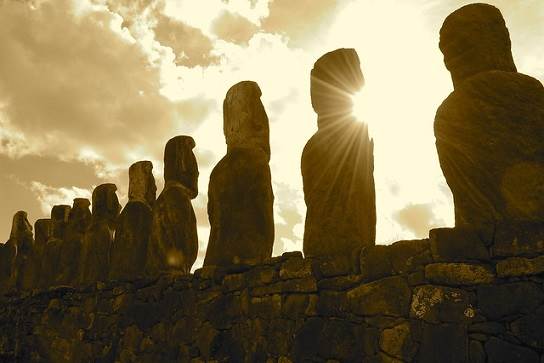 Rapa Nui’s ancient spiritual protectors, the moai, silently gaze upon their island. While the statues’ eye pieces have long since broken or disappeared, their hollowed sockets still create the impression of stoic guardianship that takes visitors’ breath away, and sometimes even raises a few hairs. Under the constant watch of these towering monoliths, visitors to Rapa Nui, the local name for Isla de Pascua (Easter Island), find a world wildly distinctive from continental Chile.

Although located 2,350 miles away, Easter Island has been officially part of Chile since 1888. Even with Spanish as its official language, due to its deep Polynesian roots and geographic isolation, a culture unique to the island has emerged.

A spirituality revolving around ancestors guided the islanders. The idea of ancestor worship is not particularly unique in itself, but the way the islanders manifested their beliefs through the moai is. Clans buried their chiefs under ahus (platforms) and raised the statues above them, viewing each statue as a representation of the deceased that would protect his descendants.

Regardless of one’s spiritual beliefs, standing face-to-face (more like face-to-towering-crotch), creates a certain atmosphere that puts the ancient mentality regarding moai into perspective. It may simply be due to the statues’ grandeur, but in seeing them, something sends whispers rippling through groups and causes audible gasps among crowds.

In the early 1500s, overpopulation which led to massive deforestation signaled Rapa Nui’s decline. Population estimates from that period range from 15,000 to 20,000 inhabitants. Civil war broke out as a result of these insufficient resources and tribal divides. Then the Europeans discovered the island in the mid-1700s on Easter Day, (hence the name), and introduced the usual problems associated with explorers of that era – slavery and disease. The islanders, weakened by the centuries-long civil war, could not withstand the European influence. With only 111 islanders remaining in the 1870s, Rapa Nui culture teetered on the brink of extinction.

While modern day Rapa Nui descendants now belong to various Christian denominations, the ancient spirituality lives on. Islanders place a lot of importance in preserving their past in order to maintain their culture. As a result, special laws prevent those without Rapa Nui blood from owning property on the island. Thankfully, this has prevented major companies from building towering high rises and golden arches which would pollute the pristine skyline and overshadow the moai.

This has also allowed the Rapa Nui population to steadily increase again to about 3000 people. Consequently, descendents happily and proudly share their ancient culture as much as possible. As a result, visitors find an even more relaxed version of the mainland’s cariño (warm, welcoming goodwill).

As one would expect, living on a remote island also plays a major role in Rapa Nui culture. Apart from being a highly educational trip, flying out to Easter Island is the epitome of “getting away from it all.” Visitors can indulge in the picturesque wind caressing palm trees while lying on powdery white beaches with lapizlazuli blue water. Islanders take advantage of these perfect conditions as well with a very poco a poco (day by day) lifestyle.

Living low-stress lives, with very little to worry about, Hanga Roa, the island’s only town, reflects this. Residents enjoy nightly games on the football pitch and during the day surf, stroll around or just sit and take life as it comes: slowly. The laid-back feeling is infectious, and pervades every aspect of life. As a result, the active traveler will get antsy quickly. Someone looking for the take-it-easy vacation, on the other hand, will find paradise.

Unfortunately, Rapa Nui is not a cheap trip. Make sure to budget plenty of money for everything, from flights to food. Completos, (Chilean hotdogs), for example, usually cost at least CP$1,500 (US$3.00) compared to about an CP$800 average in Santiago. With high prices in mind, make sure to look for restaurants off the tourist path, such as La Mamma Nui. Enjoy a delectable pizza with the dough handmade in the restaurant, or splurge on a parrillada in a clay bowl filled to the brim with lamb, sausages, beef and chicken for about CP$15,000 per person. The easiest way to find the restaurant is to cross the alley in front of the Taha Tai hotel at Apina Nui S/N – Casilla 55.

Options are limited and expensive to make it to Rapa Nui. LATAM is the only carrier that serves the island, with flights a few times a week from Santiago and Lima. Prices vary, depending on the season.