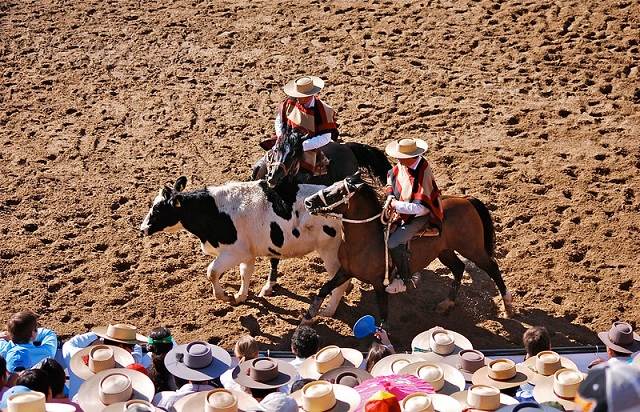 Strong smells of new leather and grilled meat rose up, mingling with the dust outside the deep dug out medialuna (the sizable half-moon shaped rodeo arena). Leather bridles and saddles hung from hooks above the many stalls, which also sold terrifyingly huge silver spurs, handy lassos and every other cowboy-equestrian accessory one could possibly hope for.

The National Rodeo Championships are held every year in the town of Rancagua, the grand finale of a string of rodeo competitions that happen all throughout Chile. Since Rancagua
first hosted the national championships in 1949, a three-day festival of rodeo in March or April culminates with finals on Sunday, when the winner is crowned.

Rancagua boasts the largest medialuna in Chile with a capacity for 12,000 people, making the town the ideal permanent home for the championships since 1975. In a scene reminiscent of a country fair, the crowd spends the day watching the competition, doing some rodeo-themed shopping and plenty of eating and drinking.

Entire lambs were roasted over open fires, salted down and carved next to the bustling outdoor restaurant. Once seated, food choices consisted of meat and potatoes, meat and salad, or just plain meat.

Huge hunks of chicken, lamb and chorizo arrived sizzling on thick metal platters, heated by white-hot coals to keep the food roasting. As the carnivorous diners reached to get their meaty fill, boiling oil skittered from the hot platter and minor burns were sustained.

In this carnivorous, cattle-herding environment, however, such injuries must be taken like a man. After all, Rancagua’s rodeo is an epicenter of masculine showmanship and endurance.

Yet it seemed the enduring was, for the most part, borne by the calves. Each rodeo event began with one of these great bewildered beasts venturing out into the medialuna. Two huasos (riders) on fine, brave horses would then bear down, trying to stop the calf by pinning him against huge long cushions. Points were then scored, and faults deducted by judges in a box high above.

While the lower sides of the medialuna were cushioned for the benefit of the calf’s body, the animal’s horns would make a loud crack that was extraordinary and primal, as they slammed against the wooden upper walls.

Each calf is only used once in its life for rodeo purposes, so it does not go through the ordeal twice. He can then return to the adjacent field, exhausted and relatively unharmed, though sometimes slightly limping.

The calves mostly trotted out fine at the end of their turn, although some completely collapsed after the first cushion pinning. They would be heaved and rolled, pushed and pulled by the tail until they stood up and again trotted on, seemingly unhurt.

If a calf remained particularly stubborn and still refused to budge, a huaso on foot would slide a small electric prodder out from under a poncho. Such prodders are part of everyday cattle herding, yet the use of them in the arena for sport felt uncomfortable.

Though not nearly as gruesome as Spanish bull fighting, rodeo is controversial throughout the world, and a sizable group of Chilean Animal Rights Activists

had gathered outside the medialuna to protest this official national sport of Chile.

Spectators may find themselves battling with guilt–the calf, while not physically harmed, is clearly distressed during its 10 minutes of fame–yet the event is dramatic and fascinating to watch. It is also fantastic to be swept up with local people taking part in this old, rural Chilean tradition.

Chilean rodeo began in the 16th century when cattle, which were then not easily identifiable, were rounded up in Santiago’s great Plaza de Armas every year for branding to prevent loss.

Over time this round-up became mandatory, and as the huasos became more skilled at herding up runaway cattle in the plaza, the event evolved into a carefully regulated forum where riders could showcase their talents.

The huasos are able horsemen, but the most impressive competitors at the Rancagua rodeo were the horses themselves. A spectator could see fear in their eyes as they bore down upon the calf, but there was also a determination, and not one horse frightened or bolted during the competition.

Bred and trained for rodeo, the horses chase the cattle around the arena, skillfully sidestepping and slamming their bodies into the calves without hurting themselves, their riders or the calves. Afterward, they placidly wait side by side as huasos perform complicated, elegant dressage steps with their horses for the crowd.

The Rancagua rodeo might be for show, but it represents the traditional Chilean countryside and also the expertise of the men and horses that round up cattle on farms around Chile today. If you can manage to suspend your qualms regarding the involvement of animals in the event, the rodeo is an intriguing trip back to a historic, rural Chile.