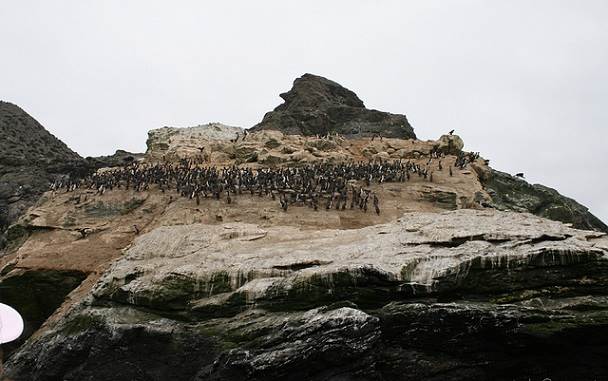 Last weekend, I felt the urgent need to escape Santiago’s big city life. Annoyed by the roaring traffic, the ear-splitting sounds of car alarms, the immense flow of people sluggishly filing through the streets during rush hour and the smoggy air penetrated by exhaust fumes, I started making plans for my getaway. But where should I go?

ISLA DAMAS / PUNTA DE CHOROS — Three little islands can be discovered only 100 km north from beach town La Serena and 600 km from the largest city of the country I would leave behind for a few days. Secluded from civilization and surrounded by the bright blue majestic sea you won’t bump into masses of civilization of any sort.

Isla Damas, Isla Choros and Isla Chañaral therefore were the perfect destination for me – traffic noises would be replaced by the soothing sounds of the ocean surf and the natural sounds of the animal kingdom. I would be able to breathe fresh salty sea air instead of polluted air. Instead of hectic civilized human beings, I would have the privilege to behold all sorts of rare, graceful and funny animals within their natural habitat.

The three islands are not accessible to the public in order to protect them from pollution and to maintain their environmental balance. Tourists who plan on visiting the islands can do so by booking a tour from La Serena. From the little fishing village Punta de Choros you can embark on a trip around the islands and explore Isla de Damas for one hour.

I had already fallen in love with the region before I reached Punta de Choros. Driving by Caleta de Horno, which offered a picturesque view as it was illuminated by the rays of the rising sun, I felt inspired. The tour guide, a worldy-wise old man, informed us that the village provides tourists with opportunities for fishing, diving and visiting two more islands.

To arrive at Punta de Choros, we crossed the Cordillera de la Costa. Geologically older than the Andes, the warm, brown mountains are impressive and covered by cacti and semidesert scrubs. The natural surroundings instantly make you want to get out of the bus and wander.

Two hours later, we were out on the Pacific conquering the wild sea and made our way to the islands. The spectacular view and the crystal clear water left me dazzled.

I spotted the Humboldt penguin, which lives in coastal areas in Peru and Chile and owes its name to the cold ocean current it swims in.

Another species living on the island is the Guanay cormorant. It resides on the coast of northern Chile and Peru and is listed as near threatened by the IUCN.

To everyone’s delight, we could also watch a sea lion relax on a rock soaking up the sun and several dolphins accompanying our boat. This was an extraordinary experience.

Another memorable highlight was disembarking on Isla Damas. There I could give in to my adventure spirit and climb giant rocks, watch black vultures and relax at the untouched paradise-like sandy white beach taking in the incredible turquoise-colored water.

After we enjoyed an exceptional seafood dish in Punta de Choros, it was time to head back. This day is definitely stored in my memory and I will always reminisce with joy. Chile’s flora and fauna is a great treasure. It is important  everyone keeps this in mind and respects it.