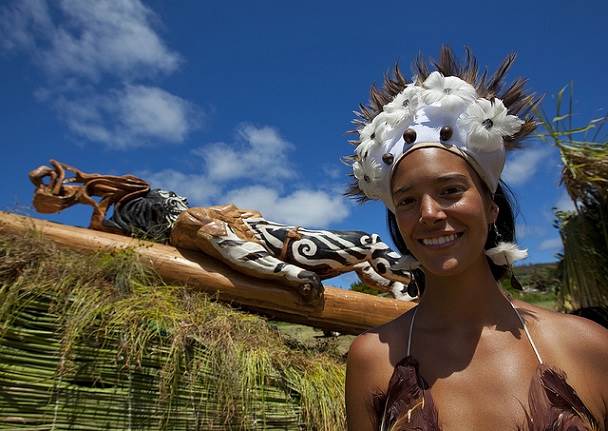 Between January 29 and February 12, Easter Island holds Rapa Nui culture’s most important celebration, the Tapati Rapa Nui. It is a popular celebration, mostly oriented towards tourism, that includes food, handcraft, traditional sports and the rescue of ancestral music and dances. We spoke about it with archeologist Andrea Seelenfreund.

The five thousand people of Easter Island multiplies during the Tapatai Rapa Nui, or Rapa Nui Weeks. Between January 29 and Febreuary 12, a large number of tourists get here to celebrate along with locals. “It may seem like a festival about dance, singing and theater, but it also has a large economic component, besides being the opportunity for youngsters to learn about the traditional way of doing things at the Island”, says archeologist Andrea Seelenfreund, professor and a big admirer of this Polinesic culture.

The election of the queen is the central element for the whole organization, which is based purely on local expressions. “There has to be at least two queen candidates, each from a different family and no relation among them (so families can work for their candidates without conflicts). The most tense Rapa Nui weeks have been those in which the two candidates were related. The ideal sitiuation is for one candidate to be from Moe Roa, and the other from Hanga Roa; or from the two traditional families, the Pakarati and the Tepana”. The historical land division of two halves, can now be seen in the fragmentation of the Hanga Roa town, where population is concentrated. “On lower Hanga Roa you find the cove, and on upper Hanga Roa or Moe Roa, you´ll be closer to the airport. Families that live in both zones represent ancient tribes. This is rooted on the formation of the community, when the economical power of these two families began to compete”.

Some say the celebreation started during the 70s, under Pinochet’s rule and with the name of “Spring holiday”. Others say its first version goes all the way back to the 40s, for the 50th anniversary of the annex of the island to the Chilean state (1890). What it is clear is that the original celebration used to be held on October or September, but on the year 1973 it was adjusted to the continental summer.

Music, dances, handcraft, gastronomy and traditional games are all part of this celebration, which since the 80s has reinforced the recovery of local culture. Previously, celebrations used to include foreign elements, says Andrea: “You could even see men dressed as Romans. There were Chilean sports like the ‘palo encebado’ that are not part of their culture, and that have now been eliminated”.

Contests rate skills on singing, dancing, body painting and the kai kai, a complex game of hands rooted on an ancient poetic tradition. “These are figures made with threades, that you shape with your hands while reciting related verses. So the skill goes not just on the shape, but also on the way you recite, the body and hands movements you make, the tone of your voice. The contest is divided by age, and children from 6 years of age can take part in it”.

The singing contest is a very powerful ceremony for the promotion and preservation of oral patrimony. There are two confronted large choirs that have to sing, in turns, threee songs from the Rapa Nui traditional repertoire, never repeating a song. “I was once at one contest that lasted from 9pm to 4 am”, says the professor.

In the economic field, one finds the contest of traditional fishing, and the agricultural products that are exhibited at the fair. “There are pineapples, sweet potatoes, pumpkins, watermelon. The one that wins is the one that has the largest fruit, and once there was a big debate over a pineapple that was so big that it was part of a non-traditional form”. The cooking of food with typical products is also part of the contest.

There´s also a contest on handcraft, with the making of shell necklaces, wood carving and making of rush mats with reed and fabrics made out of tree bark.

—You soak the tree bark in sea water, and then you start stretching this fabric over wood until you get a piece of cloth that you’ll later sew with others. These is how the tradicional dance dresses are still made. The tree from which you get this is related to the papyrus, and has a southeast-asian origin. It has been terribly exploited, so now you find very few at the island.

Fabrics have a great importance in the whole Polinesia, they represent status and hierarchy. “The covers made of ‘tapas’ are given from generation to generation lias wedding gifts”.

Sports contests include surf, canoe, diving, swimming and ‘haka pei’ (throwing yourself by the slope of a hill inside banana trunks). There are also horse races and a triathlon. All winds up with allegorical cars that carry huge carvings that have been prepared one or two months ahead of the celebration. “A lot of people work on the organization of these contests. So the family of the queen later rewards them giving away typical foods (fish, sweet potatoes, taro). When the queen is elected, there is a big ‘curanto’ for all who contributed”.

The sharing
This Easter curanto is different from the one you find in Chiloe. What matters is to share, and that everybody gets something. “The table is not important. What matters is the distribution, and how it is made”.

There´s a clear class-difference according to money, and which has gotten stronger during the last decade. But family-union in the production work is still a tradition. “There’s clearly a new group, which is the one that has money —some, a lot— and that is mainly connected to the hotel industry, in contrast to a poorer group that lives off artisan jobs, such as fishing and agriculture. At hotels, you see that the ones that make the work of maids and waiters are the ‘poor relatives’. And, at the same time, the young people that work to supply the hotels are selling their products to their rich relatives”.

To adopt the cultural characteristics of each tribe, families at the island are distinguished by the vocation. Some are famous for fishing; some, for wood carving, and some for the kai kai, music or businness.