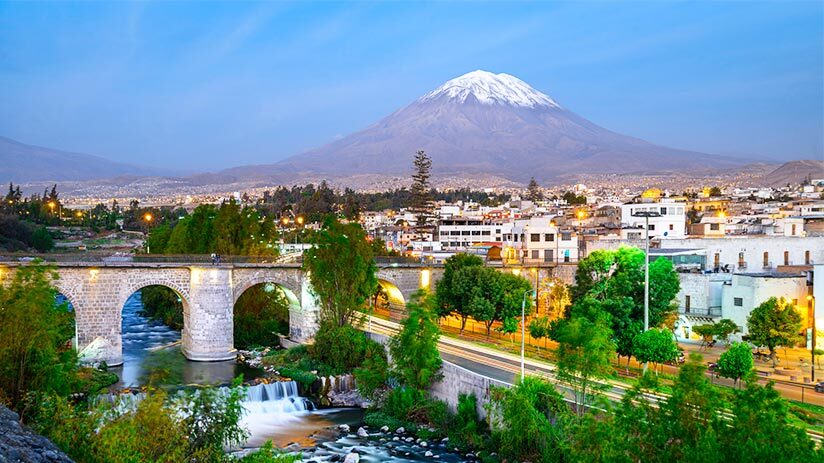 The city’s signature architectural feature is its many structures made from sillar, a white volcanic rock material. Stroll through the city’s Plaza de Armas and you’ll encounter buildings, walls, and archways made from the material, including the neoclassical-style Catedral de Arequipa (Arequipa Cathedral) and the municipality building.

The church and cloisters of La Compañia located just off the plaza are also constructed from sillar and are emblematic of the Baroque mestizo period. Head about two kilometers from the Historical Centre to the suburb of Yanahuara and stop at the Mirador de Yanahuara, a sillar archway that will give you an unbeatable view of the volcanoes and countryside that surround the city.

While you’re in Arequipa, discover the city’s true architectural gem: the Santa Catalina Monastery. This 20,000 square meter “city within a city” was first constructed in 1580 and expanded in the 17th century.

The monastery was built in a Spanish colonial style with mestizo influence. Sillar is a prominent construction material within the monastery, but is often painted in vivid reds, blues, and oranges to give it a distinct look. Pass a quiet afternoon meandering through the monastery’s open courtyards and narrow streets, taking in the view on the rooftop, or enjoying a midday coffee at the convent’s outdoor café.

The Museo de Santuarios Andinos is located one block away from the Plaza de Armas on La Merced Street. Here, you can drop in to see the museum’s main attraction, Juanita, the 13-year-old maiden of Ampato who became the victim of a ritualistic Incan sacrifice and was buried in ice for over 550 years.

The museum also holds 18 other mummies found atop Latin American volcanoes, as well as a collection of textiles, ceramics, and gold found in their tombs. The museum tour lasts one hour and includes an informative National Geographic video.

It is worth noting that the museum authorities have taken pains to present the artefacts in a tasteful and respectful fashion. Photography is strictly prohibited and visitors are asked to show respect for the people and history represented in the displays.

Arequipa’s San Camilo Market is a must-see for culinary and culture tourists.

Here, you can sample some unique Andean fruits: the sweet, green-colored cherimoya fruit and the fleshy orange-hued lúcuma. Buy them in their natural form or go to one of the market’s juice stands to try them freshly squeezed.

Those with daring taste buds may try jugo de rana, a smoothie-like beverage and supposed aphrodisiac made from bean broth, honey, aloe vera, maca, and its namesake ingredient: frog.

Fans of spicy food will enjoy Arequipa’s many picanterías, which serve typical regional dishes such as rocoto relleno (stuffed peppers), adobo (sliced porked meat cooked in a clay pan and marinated in spices), and chupe de camarones (shrimp soup with milk, eggs, cheese, and spices). These restaurants are abundant throughout the city, and many can be found near the Plaza de Armas.

Arequipeños also eat traditional Andean meats like guinea pig and alpaca, and incorporate them into a number of regional dishes. Dishes are often accompanied by a glass of chica morada, a non-alcoholic beverage made from purple corn. Popular alcoholic beverages include pisco sour, chilcano, and the local beer, Arequipeña.