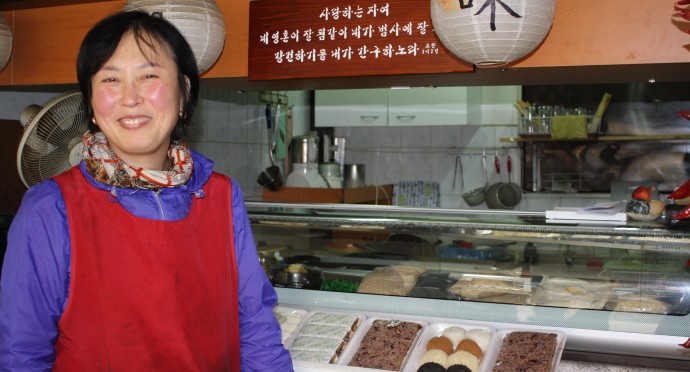 Patronato is a neigborhood located in Recoleta district. Between Bellavista, Domínica, Loreto and Recoleta streets, Patronato brings together colors and flavors from faraway lands. Upon the arrival of Arab immigrants in late 19th century, Korean, Chinese, Indian and Palestinian communities joined. Here is a tour through the faces, product and stories that make of Patronato one of the most multicultural barrios in the city.

Arab sweets in Santa Filomena & Patronato streets. In this intersection you can find a small street stall with an array of traditional Arab sweets that melt in your mouth: the smooth and syrupy flavor of the baklavas and haristel-los, among others. The stall is run by its owner, who arrived from Irak in 2008 as a war refugee. “My wife and I make the sweets ourselves” he tells us.

Clothes from India. The owners of this clothing store came from northern India to make a living in Patronato. Bright colors, light fabrics and captivating scented incense are part of the atmosphere of this textile hub.

Homemade Korean food in Misoya: Santa Filomena 348 is the home to Misoya, a small Korean restaurant. Albeit it is less famous than other restaurants from the area -like Sukine- Misoya has excellent food to offer and great service. Its owner makes food on the spot: wether its cozy Udong noodle soup or Kimbap, the Korean version of sushi. “Korean food is very good for your health”, says Ms. Hee Kyung Park, owner of the shop. “Kimchi (traditional fermented cabbage) is very healthy, and the foods made with Korean bean act as anti-cancer agents”.

León Taiwanese Tea.  Leo Yang arrived in Chile a year and a half ago to make the delicious and authentic nai cha, Taiwanese milk tea to go. It’s a sweet, refreshing and comforting combination. You can add tasty tapioca pearls to your tea and also order it to go.  If you’re craving for something salty, try some succulent fried chicken or spring rolls. Té Leon is located in Eusebio Lillo 398 B.

Jabri arab delicacies. Farther away from the crowded Santa Filomena and Patronato streets, Eusebio Lillo is a quieter sight which still keeps some businesses and restaurants of the Arab community, pioneers in this neighborhood. A few steps away from Recoleta you will find Jabri, an Arab diner which offers a nice selection of Arab dishes and sweets along with a classic “Turkish coffee”.  Angélica Anturch is the soul of the restaurant that has been the family business for 10 years. She is the daughter of Juan Anturch, a Syrian immigrant who arrived in 1914 to work in the textile business. “My son studied gastronomy, so he decided to recover the recipes of his grandparents” says Angélica. Since then, the family decided to trade fabrics for pans, delighting the community with the flavors of their ancestors.