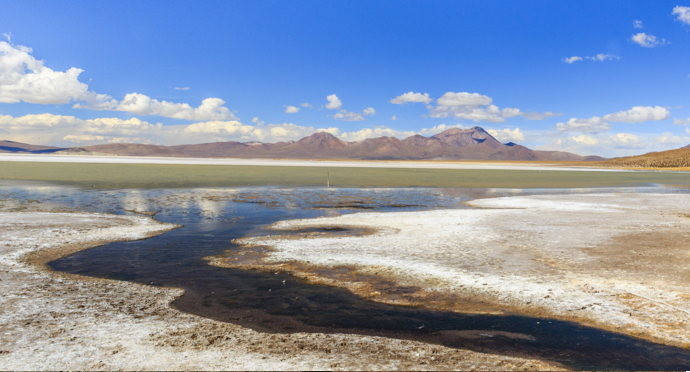 6 Natural Monuments throughout Chile, that delight with their landscapes and wildlife. From the region of Arica and Parinacota, until Magallanes.

All across the national territory it is possible to find around 100 parks, reserves and natural monuments, and thanks to the climatic diversity in Chile, each has a unique flora and fauna. Here we have selected a list of 6 natural monuments that can be found throughout our country, from the north to the extreme south of Chile.

Located in the región of Arica and Parinacota and declared a monument in 1983 the Surire salt flat is located 4,245 meters above sea level. You can also find different sized lagoons and two small rivers: the Surire river and the Blanco river. The area is affected by a great thermal oscillation, with temperatures of -15 ° C on winters nights, and reaching 5 ° C during the day.
Its fauna highlights by the presence of three different types of flamingoes: Chilean flamingo, Andean flamingo and James flamingo. There is also presence of ñandú, perdiz de la puna and caití. Its flora stands out for the presence of tola, paja brava and bofedal. ”

Located 18 km from the city of Antofagasta, La Portada Natural Monument stands out for the arch that carries the same name, formed by a sequence of fossiliferous marine sedimentary rocks, located on the coast. Within its surface are hiking trails, a museum and a restaurant open to visitors.
Its fauna stands out for the presence of guano birds, such as the piquero and the gaviotín monja, along with guanay ducks, dominican seagulls and pelicans, among others. Occasionally you can see mammals such as the culpeo fox, two-tailed sea lion and dolphins.

Located in the Hurtado Valley, Coquimbo region, the Pichasca Natural Monument has a great importance in archaeological terms due to the presence of fossil remains, including petrified trunks, dinosaur fossils and volcanic rocks. The climate of the area is semi-desert and warm, reaching 30 ° C during summer.
In terms of fauna, there is an occasional presence of chilla foxes and several lizards. Its flora stands out for the presence of red hawthorn, north olivillo and diverse cacti.

Located in Cajon del Maipo, just a few kilometers from the capital, El Morado Natural Monument has as its main attraction the San Francisco glacier, which can be accessed through a path that stretches for 8 kilometers.
Its climatic situation allows the development of a typical mountain range fauna, with presence of birds such as the cometocino de Gay, the cordillera humpback and the mountain miner. Its flora consists of Andean sclerophyll scrub and high Andean steppe.

Located within the province of Cautín, Araucanía region, it was used by the Mapuches as a place of ceremonial worship and for the extraction of wood for the purpose of building rucas (traditional huts).
It has four trekking trails: Los Lotos, Huepil, Agua Santa and Los Copihues, where you can see protected animals such as the torcaza, the Darwin frog and the monito del monte. Inside the place you can also see araucarias, peumo and lingue.

Formed by two islands located in the Magallanes region, Magdalena Island and Marta Island. It is considered by CONAF as one of the most important penguins sites in southern Chile, with a population of about 60,000 Magellanic penguins. Within its surface you can also find birds such as the imperial cormorant and several seagulls, along with a high presence of sea lions.
The flora is quite scarce due to the climate and fauna present in the area, but in parts where there is no animal presence, some grass can be found.