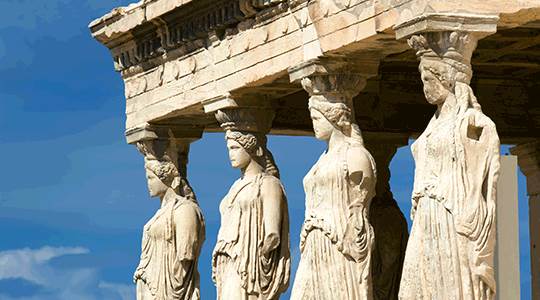 From ancient ruins steeped in history, to natural wonders that hide hidden beasts, there are plenty of myths and legends that surround some of our favourite destinations. Some have been told through the years to scare misbehaving children whilst others are engrained in historical textbooks – below are just some of the most interesting tales from across the world.

Perched high on the hillside of Mount Parnassos, the ancient ruins of Delphi are one the most important sites in Greek history, second only to the Acropolis of Athens. Dedicated to Apollo, the God of the Arts, Healing, Prophecy and Light, the Temple of Apollo is the focal point of Delphi.
Legend has it that Delphi was originally depicted as the centre of the world by Zeus. According to the tale, he released two eagles at opposite ends of the earth in order to find Goddess Gaia – Mother of the Earth. The eagles then met at Delphi and Zeus marked the spot with a large egg shaped stone called the omphalos which marks the navel of Goddess Gaia and the centre of Earth. The omphalos (a large marble carved stone) is currently located in Delphi Museum.
The omphalos was guarded by Pytho- Earth Dragon of Delphi and son of Gaia. Apollo killed Pytho and then made Delphi his home. He then appointed a Greek Priestess to become the Oracle of Delphi and passed on some of his powers which included prophecy telling. The Oracle of Delphi was also known as the Pythia and many came to her asking for their prophecies.

There are no shortage of myths and legends that surround the deep and mysterious Amazon Jungle. The Lupina Tree is found in many parts of the rainforest. It ise iconic, huge in size with deep roots and a wide trunk. They are considered protectors of the Amazon Jungle and are said to curse anyone who may offend them.
El Chullachaqui is another protector of the jungle. He is said to be a small man that has one peg leg which leaves a unique circular trail. El Chullachaqui often appears in legends leading people to get lost deep within the forest.
The Amazon River also holds its own tales. The pirarucu is one of the largest freshwater fish that can grow up to 10 feet long. Natives in South America believe that the fish was once a vain warrior from the Uaias tribe. According to the legend he was very cruel and often insulted the Gods. One day they were angered by his behaviour and sent a ferocious storm upon him. Pirarucu was fishing at the time but simply laughed. The gods, even more furious with his attitude, threw lightening over the region. The warrior, becoming struck by the storm, fell deep into the river where he later turned into the fish that can be found today.

Perched precariously on the edge of cliff in Yangon, Kyalktiyo, known as Golden Rock attracts tourists from far and wide. It is one of the most sacred sites of Myanmar, gilded in gold and topped with a large pagoda. Legend has it that the boulder is held in place by a single strand of Buddha’s hair that was given to a local hermit. It is also said that if you visit Golden Rock three times in a year you will be blessed with wealth and happiness.

Many who travel to Colombia are entranced by one of the country’s most famous produce- emeralds. However, there is more of a story behind these precious jewels that many do not realise. Colombian mythology tells of a god, Ares who created two immortals named Fura and Tena. They could enjoy an ageless life and populate the Earth- as long as they stayed faithful to each other.
Unfortunately, the woman Fura broke this rule with a young man named Zarbi. Both Fura and Tena aged rapidly. Tena, distraught about his wife’s infidelity killed himself whilst Fura wept beside. Her tears became the emeralds that are found in the Muzo region, one of Colombia’s most famous emerald region. Ares then changed the couples into large rocks which can be seen today. Zarbi in anger changed into a river running between the two rocks in order to separate Fura and Tena forever.This tragic love story is one of the many legends which have their origins in the indigenous
communities of Colombia.

Tucked away in a pocket of South America, Guyana is still very much off the beaten track. Nestled within deep jungle is the mighty Kaiteur Falls. The great waterfall brings the most avid of travellers to Guyana as they feel the spray on their face from the powerful water. Translated to “Old Man’s Fall” there is a certain legend linked to this natural wonder.
According to stories, an old man named Kai was sailing down the stream towards the edge of his waterfall. As he was hurtling towards his demise the great spirit Makonaima turned him immortal. Kai’s boat was changed into a pointed rock which can be seen from the bottom of the waterfall. Legend has it that the elderly man is said to be living in a cave behind the vast waterfall and when the falls are misty, it means he is cooking.