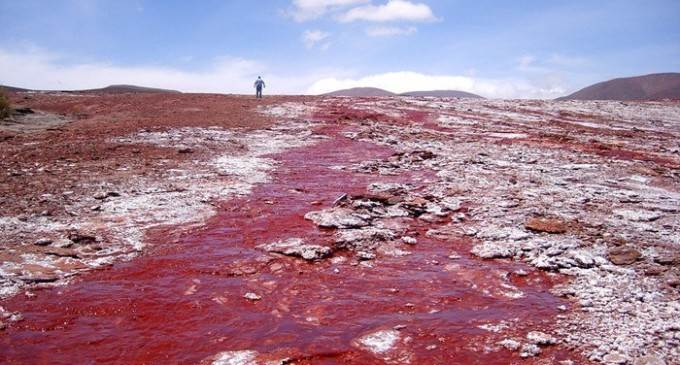 Every country has mystical and secret places and Chile is certainly no exception! I Love Chile investigates two beautiful places to visit: Laguna Roja (the Red Lake) in the North and Isla de los Muertos (Island of the Dead) in the South.

There are secret places all over the world and Laguna Roja was one of them until 2009. Located in the commune of Camarones, in the Arica and Parinacota Region, 147 km from Iquique, the lake is known as the Red Sea. This is because aquatic animals such as sharks, turtles, whales and dolphins cannot live in its overly hot and sweet waters that range from 40 to 50°C.

Aymara people kept this place secret as they consider it dangerous. Some locals died after drinking water from the lagoon and others have disappeared in the area, never to be found.

There are two more lagoons in the area: Laguna Verde and Laguna Amarilla. There is a lack of information about why these lagoons are of the colors they are. Some scientists believe that is due to the aquatic plants and algae. Residents say that when a bad person is nearby, the lagoons begin to bubble.

Isla de los Muertos hides an interesting unsolved mystery. The island is located in the banks of the Baker River in the Aysén Region. The story goes that in 1906 the Sociedad Explotadora del Baker sent 200 workers on a ship to the mouth of the river Baker to make a path to Argentina through the Patagonian Jungle, to help the trade between both countries. The company was supposed to send a ship with supplies but it never arrived, so the workers started to eat bacon, salty meat, rice and flour infected with weevils. This, along with the climate, the geography and the lack of food, resulted in the death of some of the men.

The remaining workers buried the dead in rustic coffins with a cross, far away of where they were staying. Finally, a ship arrived and took care of them.

In total there were between 77 to 120 dead workers but nowadays only 33 crosses remain on the island, due to the floods that have occurred in the Baker River. It is sad because with the passing of time, this Historical National Monument will disappear and we will never discover the truth behind what really happened with these workers.