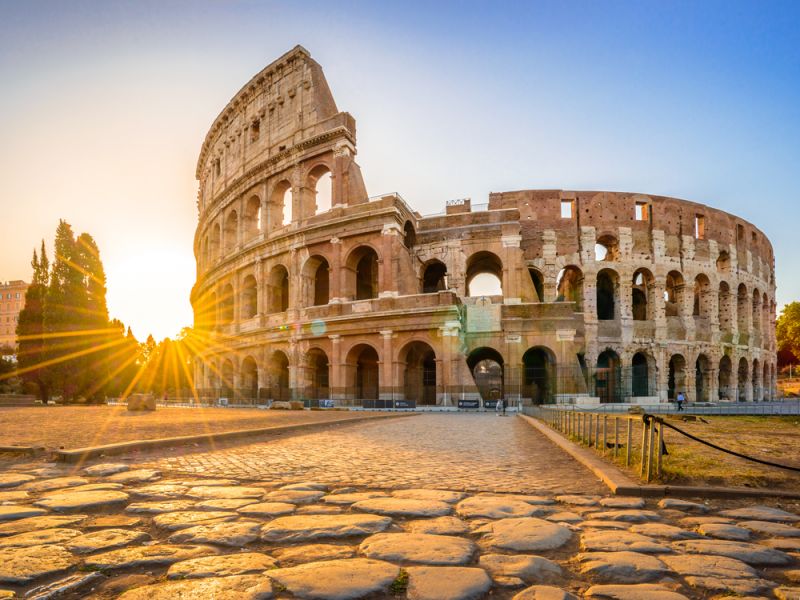 Ancient ruins, romantic waterways, renaissance masterpieces and quaint villages, Italy has a seemingly unending list of must-see attractions. You are never short of art, food, culture or history, no matter where in the country you choose to stop. Here’s our list of the top 12 must-see attractions in Italy.

Quite possibly one of the most famous attractions in the world, the colosseum attracts over 4 million tourists each year. Walk amongst the ghostly ruins of what was once a magnificent amphitheatre seating over 50,000 spectators. Famous for its violent gladiator combats, theatre shows and wild animal fights!

Often the image tourists have of Italy is the canals of Venice. The city of islands romanticizes, charms and captures the hearts of many tourists, year on year. One of the best ways to explore is by gondola, drifting along the labyrinth of canals, connecting narrow passageways and floating under the quaint bridges. No matter which way you go, all canals eventually lead to the heart of Venice, the Grand Canal.

Visiting Italy and not seeing the leaning tower of Pisa is like visiting Paris and missing the Eiffel Tower. The crowds may be heavy, but rest assured, chances are you will still partake in the cheesy perspective photo opportunity! This architectural marvel took 344 years to build and is one of the most visited sites in the world.

The most iconic landmark in Florence which dominates the skyline is the Florence Duomo, also dubbed as one of the finest cathedrals in the world. The cathedral was built between the 13th and 15th centuries and finished in 1424. Climb the 414 steps that lead to a viewing platform in the campanile which holds some of the best views in the entire city.

If you are planning to head to Florence, the Uffizi Gallery is not one to be missed. Arguably one of the most famous galleries in the world, it houses some of the greatest works from some of the most influential artists the world has ever seen. From Leonardo da Vinci to Michelangelo, Raphael to Caravaggio. And the building is beyond beautiful in itself, perfectly situated looking over the Arno River.

One of the most popular attractions in Italy, St Mark’s Basilica is situated on the famous Piazza San Marco in Venice. Dating back to the 9th century AD, this church has many legends and interesting stories attached to its name. It is also one of the most stunning pieces of architecture in Italy. Marble decorations, gold leaf inlays and spires that seemingly reach the sky. It is worth the trip to just stand in awe.

The largest church in the world and the centerpiece for Vatican City, St Mark’s Basilica is definitely a must see attraction of Italy. The building contains a treasure trove of artistic masterpieces, statues and frescos from some of the most famous artists in the world. The giant nave of the church can hold a congregation of more than 60,000 and remains as one of the holiest places in the world.

Another one of Italy’s major attractions, the Roman Forum was once the hub of the Roman Empire. This is the place where social gatherings took place, political debates ensued and commerce first found its feet. Now only a sprawl of mystical, seemingly unrelated if not colossal ruins, it is an odd but very captivating site to behold. See remains of temples, pillars, courts and market halls as you wander this ghostly space.

The largest church in Italy, Milan Cathedral stands at 515 feet. This extravagant cathedral is Gothic architecture at its best. Embellished with 135 spires and 3400 statues, with the outside a pink-hued marble, this stunning structure took 600 years to build. Completing only the final touches in 1960.

A visit to Italy would not be complete without a trip to see the masterpiece of Michaelangelo at the Sistine Chapel. The ceiling is probably the most famous. Beautiful does not begin to describe the fresco covering 10,000 square feet with the famous work “The Last Judgement”. Definitely a must see if you are visiting Rome.

Lake Como shows tourists a completely different side to Italy than when visiting the cities. The world’s largest celebrities and film studios flock to this area to capture the otherworldly views and sublime setting. 146 square kilometers of serene lake is flanked by dense alpine forest and picturesque, traditional villages. The perfect spot to rent a boat and explore Italy on water.

If you are visiting Rome, a must-see destination is definitely the Trevi Fountain. Legend states that whoever tosses a coin into the Trevi Fountain will receive good luck and return to the city once again. Visiting the fountain at night is especially magical. Watching the still water bounce off the glittering marble, dimly lit with street lamps, definitely captures a certain Italian romance.