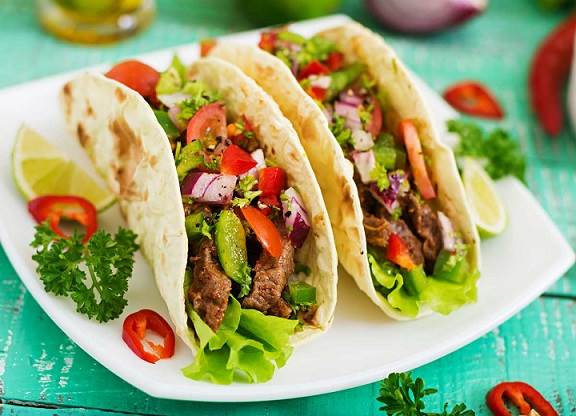 Fascinating ancient ruins and mouth wateringly delicious street food are arguably the two main pillars of every great trip to Mexico. Some travellers may have tasted all of Mexico’s most iconic dishes but aren’t too hot on their Mayan history. Others might be keen experts on Mexico’s past but haven’t dabbled in some of the nation’s favourite dishes. From the obvious favourites to the more obscure phenomena, parallels can be (tenuously) drawn between these two sets of Mexican favourites. Here is our attempt to draw said parallels:

The two titans of the respective Mexican food and temple scenes. Each is undoubtedly the first thought that comes to mind when either Mexican cuisine or Mayan ruins are mentioned. Upon arrival in Mexico, regardless of your form of arrival into the country, it will likely be mere minutes before you hear chatter from fellow travellers about the delectable flavour of Mexico City’s street tacos or the mesmerising spectacle of Chichen Itza’s iconic main pyramid. What is most prominent about the two is the fact that, whether you’re referring to the famous meat-filled corn tortillas or the Mexican member of the New 7 Wonders of the World, they very much live up to the hype!

What stands out about these two is the fact that no trip to Mexico’s capital is complete without sampling both. Whilst not technically within the city limits, Teotihuacan is an absolute must when in Mexico City, as is sampling the gluttonous deliciousness of an authentic torta – Mexico’s take on a sandwich. Another shared feature between the two is the notable size. Teotihuacan is home to the Temple of the Sun, which is amongst the largest pyramids on planet earth outside Egypt – it is a truly breathtaking sight. Comparatively, tortas are renowned for their gut-busting size and ample fillings that can keep a grown man full for an entire day (before inevitably heading out for another round of scrumptious street food in the evening). Despite their intimidating size, whether it’s staring at the Temple of the Sun or gorging on a fattening torta, you definitely won’t want the experience to end.

These two underrated gems of southwest Mexico are both inherently Oaxacan. In a region known for its fascinating food scene and truly ancient history (with evidence of human life here dating back to over 13,000 years ago) travellers can find references to these two Oaxacan classics in an abundant manner that won’t be found elsewhere in the country. Relatively unknown and truly underappreciated in their respective rights, both the multi-levelled hilltop city and the undeniably flavoursome sauce – which comes in a number of different colours, typically drizzled over meat – are classics that should not be missed by anyone that visits the state of Oaxaca.

These two each draw some of their greatest components from being at a coastal location. Tulum’s striking beauty owes much to its Caribbean coast setting, with ancient structures overlooking some of Mexico’s most spectacularly beautiful coastline. As for tostadas, whilst these crispy tortillas can be topped with just about anything delicious, they are arguably at their best when topped with fresh seafood caught just metres from where you’re sitting. Both are also appealing in their relatively small size when compared to their equivalents’ gigantic sites and greedy portions, offering the ideal way to break up your day at the beach – whether in the form of a light snack or a quick amble amongst ruins – before heading back to bask in the brilliance of Tulum’s Caribbean rays.

Both increasing in popularity but still not competing with others higher up this list, Palenque and tlacoyos lack the recognition that their magnificence truly deserves. Palenque is considered by many experts to be Mexico’s most stunning set of ruins due to the array of architecture on display in its jungle-flanked setting. This multifaceted attribute may also be said for the way in which tlacoyos are both filled with fillings and topped with toppings. One may also argue that the fact a tlacoyo is topped with greenery, in the form of nopal, could be compared to the vegetation-coated temples of Palenque. Ok, we may be clutching at straws slightly here but it is undeniable that both Palenque and tlacoyos deserve a place amongst Mexico’s tip top ruins and snacks respectively.

Both Uxmal and cochinita pibil are as unequivocally Yucatanean as this traveller-friendly state’s white-sand beaches, intriguing cenotes and even Chichen Itza itself. What the two have in common is the fact that they take time to truly appreciate. Thanks to their somewhat off-the-beaten-track location, the immense structures of Uxmal require an overnight stay to truly enjoy the pre-Columbian temple complex in all its glory. As for cochinita pibil – this Yucatan staple is created by slow roasting a pig for over 10 hours, until it is as succulent as meat can be, before serving in a soft tortilla or freshly baked rolls. Despite patience being an essential element for both, each packs a punch that makes it well worth the wait.

Yaxchilán is considered amongst the most influential Mayan sites in Central America during its peak, competing for power with the iconic Guatemalan site of Tikal at one time. It is this link to the rest of Latin America that also connects it to the corn husk wrapped, steamed handfuls of stuffed deliciousness that are tamales. It is unclear whether tamales originated in Mexico or Guatemala, much like the people of Yaxchilán, which sits on the opposite bank of the Usumacinta River. One thing that can be said about this Latin American culinary staple is that it was almost certainly eaten at the site during its peak, given that tamales are thought to have existed in the region for over 7000 years!