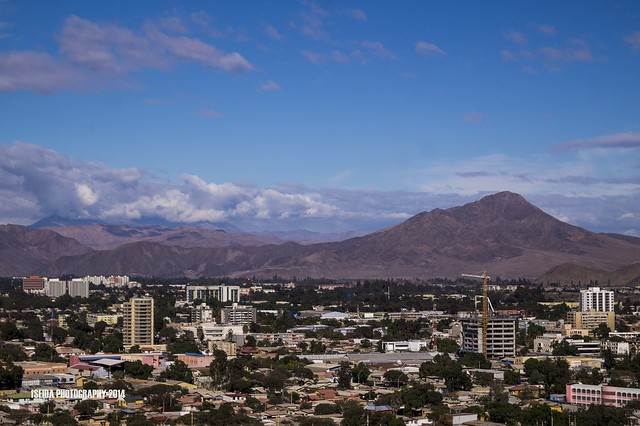 This city is the Capital of the Atacama Region. With its extended plan around Copiapó River, it presents several urban features.

Copiapó constitutes an agricultural oasis, with an important mining environment.

Copiapó city, the Capital of the III Region, was founded in 1774 by don Francisco Cortés y Cartabio y Roldán, under the name of Villa San Francisco de la Selva.

The discovery of Chañarcillo silver mineral in 1832 by the miner Juan Godoy was the beginning of an extraordinary boom, whose heritage are the valuable works of urban architecture and the first railway in South America, which ran between Caldera and Copiapó.

At the arrival of Almagro in 1536, the valley was originally called “Copayapu” by the diaguita natives who worked very hard in this zone.

Among its distinctive attractions, you can find the Mineralogical Museum, which is Chile s most comprehensive one. Here we can find silver rocicler samples from Chañarcillo and meteorites that have fallen in the desert.

You can also find a neoclassical-style cathedral church, which was designed by the English architect Williams Rogers It was built between 1840 and 1851.

Chañaral is the Capital City of this Province. It is mainly a coastal city that offers tourist services and facilities. It is also an administrative center and provides services for the regional mining industry.

Chañaral, the Capital of the Chañaral Province, is a city of over 12,000 inhabitants.

Its current development depends to a great extent of 5 North Route Pan-American Highway, which represents a services center and the entrance way for tourists. It is also possible to find architectural works, which have been declared National Monuments. The city constitutes a central point from which you can make expeditions to the Cordillera, passing through Potrerillos and el Salvador; to Pan de Azúcar Park and all the surrounding coastal zone, and then continue the trip to the north and south of the country.

It is the Capital of the Huasco Province, and it is situated in the Huasco Valley, which is an agricultural zone where vegetables, fruit and vineyards are grown. There is a considerable contrast between the green-colored Valley and the surrounding plains and arid hills.

This city, the Capital of Huasco Province, was founded on January 5, 1789, by the Governor Ambrosio O Higgins under the name of Villa “San Ambrosio de Ballenary”, after his native city in Ireland.

At present, the population of the city is 42,725 inhabitants, and it is located at 380 m. above the sea level. The city is an important agricultural activity center of all Huasco River Valley, and also a mining center since it houses the Headquarters of Compañía Minera del Pacífico (Iron) and some others located in the outskirts.

In general, the city preserves a traditional architectural patron, in which old adobe brick houses with mud and straw roofs coexist with modern buildings like the Headquarters of Compañía Minera del Pacífico.

Vallenar offers several services and tourist facilities; it is also an interesting geographical place in which you can witness certain phenomena associated with the desert covered with flowers (florid desert). The florid desert phenomenon is the result of an unusual and heavy rain that falls in those sections of the desert mostly between Vallenar and Copiapó.