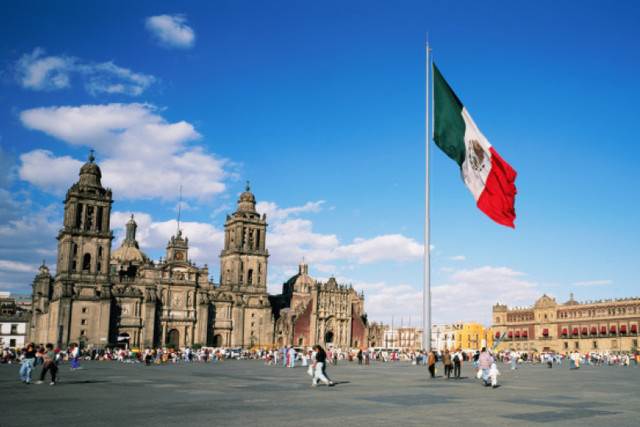 Mexico has enchanted me ever since I read about the ancient civilisation of the Maya in history in secondary school. Such a fusion of cultures! The second biggest country in Latin America & so much more than sombreros & tequila!

I succumbed to the magnetic pull in March this year & I can honestly say it is an adventure that has altered me. How can you capture the essence & soul of such a charming country & life-changing holiday? Well, here it goes…

I landed in balmy Mexico City from Ireland & survived the most hair raising taxi ride of my life to my hotel in the historic district. I wandered through the city for 2 days by myself & this is when I felt my most intrepid. I meandered through lively Chapultepec Park & passed hours admiring the collections in the National Museum of Anthropology. I eventually located the right local bus to the Basilica of Our Lady of Guadaloupe with the help of 3 friendly locals & lots of non-verbal communicative improvisations. I sipped beer while listening to the Mariachis in Plaza Garibaldi & reflected in the Cathedral at the Zócalo.

I joined a Tucan Travel group of 14 other travellers, led by our energetic guide Erin, on my 3rd evening in Mexico. Our goal for the next while was to uncover Mexico together & create individual as well as shared life-long memories & that we achieved! Over the next 13 days, I really enjoyed getting to know the mix of nationalities in the group which included Australian, American, Slovenian, English, Bulgarian & Brazilian. After all, besides the sights, it is the people you meet whilst travelling that leave lasting impressions with you & create a ripple-effect desire in you to go to their countries of origin to discover more.

I chose this particular tour as I wanted to see as many Mayan ruins as possible. Day 2 of the tour didn’t disappoint as we were shepherded around Pyramid of the Moon & down Avenue of the Dead at Teotihuacan. We scaled the immense Pyramid of the Sun & surveyed the vast site whilst listening to the echo of the Quetzal bird.

On arrival at Palenque, the stifling humidity was suffocating so the spray from the Agua Azul waterfall the next day was revitalizing. The only day we had rain was trekking through the jungle-smothered hills at Palenque seeking the unexcavated Mayan ruins. It was entrancing to see the steam rising from the jungle canopy & listen to the Howler monkeys growl at us. I felt close to home that day (because of the rain!) & it happened to be St. Patrick’s Day. I marked it by wearing a green mini hat & applying green glitter to the group that night.

On one of our free days, a splinter-group of three Aussies & I travelled to gape at the Palace of the Masks at Kabáh & marvel at none other than the Pyramid of the Magician at the World Heritage Site of Uxmal. Enroute, we had the opportunity to dip our toes into the crystal clear cenote at Sambula.

I gazed at my first of the ‘New 7 Wonders of the World’ at the UNESCO World Heritage Site of Chichén Itzá & what a beguiling day it was, as we hit on the spring equinox & the serpent descending the staircase of ‘El Castillo’. A captivating illusion of light & shadows that happens only twice a year! Beholding Chichén Itzá that day, my hunger was satiated as one of my main life destinations had been reached.

As we progressed from inland to the coast, being part of the evolving group dynamics as we revealed more of our personalities & life experiences was a story in itself. There were so many other highlights as we covered a guesstimated 3000 kilometres. Looking back, roaming the awesome archaeological site of Monte Albán; haggling at the vibrant markets in San Cristóbal de las Casas; speed-boating through the Sumidero Canyon spotting crocodiles; observing the majestic flamingos at Celestún & tasting dried grasshoppers in Oaxaca stand out.

The traditions & differences between the indigenous Mayan people of Chamula & Zinacantán were simply fascinating. The sight of live chickens; shamans; hundreds of candles; pine needles covering the floor & wooden saintly statues in the San Juan Chamula Church was otherworldly & a must for any traveller to Mexico.

Off Cancún, I went to investigate the majestic island of Isla Mujeres where my Mum had visited 40 years previously. Alternating between sipping a Cocoloco cocktail, sunbathing on the white sands & swimming in the bath-warm turquoise sea off North beach, I thought life is sweet.

I was envious parting ways from the group as some of them were continuing on travelling through Central America the whole way to Panama! I finished as I started this trip-exploring by myself!! I got 2 crowded collectivos & a taxi to travel from Cancún to the last of the Mayan ruins on my itinerary: Tulum! These ruins overlooking the phosphorescent blue Caribbean are well worth a visit

Mexico has cast a spell on me. I was bewitched by it. Will I return? Si, voy a volver! My parting words to you, are these: make the magic happen!!