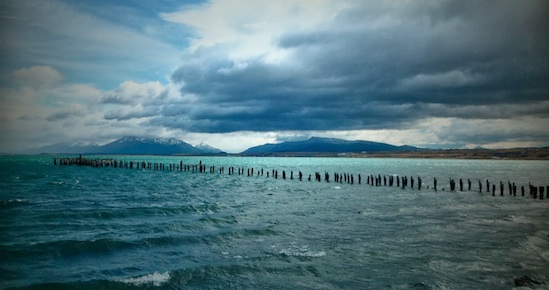 From the Lake District to the end of South America via fjords, glaciers, dolphins and birds of prey.

Foregoing Santiago’s reliable, warm, dry climes in order to brave the country’s distant south — and its well-earned reputation for temperamental weather — in the height of winter, requires either a deep ignorance of Chile’s climate or exceptional bloody-mindedness. Thankfully, I had both.

Furthermore, I reasoned, air travel was cheating. The best way to take everything in — to appreciate the gradually changing landscapes of this beanstalk of a country — was to see first-hand the transformation of climates from arid and moon-like, to lush forest, to ice field. And, I reasoned, what better way to take in these glories of nature than myriad endless bus journeys.

During my first bus marathon — from Santiago to southern transport-hub Puerto Montt — however, I began to reconsider. Watching daylight come and go as my attempts to sleep were punctuated alternately by snoring co-passengers and the driver’s predilection for listening to 80s power ballads at high volume, I reasoned there had to be a better way.

After a brief pit-stop taking in the sights of Chile’s volcano-dotted Lake District for several days, I vowed to avoid the bus wherever possible. The experience of trekking through the pre-Patagonian national parks — brimming with pristine woodland, pressed between the twin forces of the soaring mountains or conical volcanoes and the clear, expansive bodies of turquoise water that give the region its name — encouraged me seek out another option for the rest of the trip.

That alternative was a boat. Setting off from the mainland several boats, principally transport vehicles with limited passenger space added as an afterthought, make the long journey south to the town of Puerto Natales deep in Chilean Patagonia.

Pulling out of industrial Puerto Montt, signs of human life faded in to the distance as we chugged steadily and slowly southward, leaving behind the twinkling lights of the Chiloé archipelago. This was the closest we would come to the trappings of the modern world for several days. Naively I asked a crew member bearing a striking resemblance to Captain Pugwash when I might be able to expect signal to make a quick call. He simply laughed good-humoredly and wandered off along the ship’s deck.

Moving south, Chile’s coast fragments into hundreds of tiny islands. The result is a maze of fjords, remote, uninhabited islets and stark, beautiful landscapes. The labyrinth metaphor is no exaggeration; the tortuous navigation of these straits led to the deaths of numerous explorers as they attempted to find passage through to the atlantic in the tragic, but ultimately successful, 16th century Magallanes-Elcanco expedition to circumnavigate the globe for the first time.

Despite the safety and modern amenities that come hand-in-hand with the journey today, a trip through these waters still inspires a sense of adventure and exploration akin to what early explorers and indigenous inhabitants before them must have felt as they investigated this unique landscape for the first time. Winding through thin channels without seeing settlements or even another ship for days at a time, the modern world has never felt further away. Glaciers, unique flora and all manner of wildlife — birds of prey, dolphins etc. — are all visible throughout the journey before, eventually, you dock in Puerto Natales, returned to reality and ready to explore the southern tip of the mainland in earnest.

Boats travelling between Puerto Montt and Puerto Natales, and vice versa, leave approximately once a week and take four or five days to reach their destination.