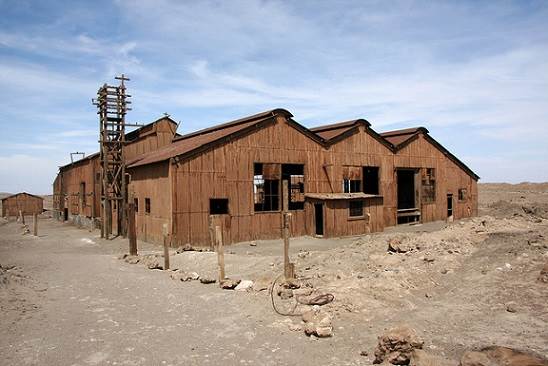 People from the Chilean pampa are as proud as can be. UNESCO has recognized the international value of their heritage, inscribing their saltpeter culture and tradition as part of the organization’s World Heritage List, by way of the old works of Humberstone and Santa Laura.

The main reason for such an important nomination is based on the archaeological and industrial value that saltpeter industry had in the development of agriculture all over the world. The former offices of Humberstone and Santa Laura are now part of the same World Heritage list that Easter Island (Rapa Nui National Park), the Chiloe churches and Valparaiso got into before them. These two spots are 50 kms. East of the city of Iquique, separated by no more than 2 kms. one from the other. Their importance is not only from an architectural point of view, but also a geographical and social one, since they played a key role in the foundation of Chile’s union movement. Both offices were also nominated among the world’s most-at-risk sites, because of how vulnerable their constructions now are, and the need they have for State protection and conservation. The cost of their complete restoration work is estimated in five million dollars.

In the middle of one of the world’s driest deserts, the drive, skills and effort of a small group of people got to build a complete universe that ended up being inhabited by 60 thousand people, all based around the extraction of saltpeter, the mineral that would go to fertilize agriculture fields all around the world. What happened with the transformation of these two towns was then considered to be a miracle, and that’s something the UNESCO agree on. There was also an intense lobby work from the Foreign Office, and some restoration efforts made by the Saltpeter Museum Corporation (now in charge of its administration by way of a special law). The Ministry of Education presented a complete plan of management that also helped in UNESCO’s decision.

“These are unique testimonies of saltpeter’s times, way of life and production system. They go to show an unparalleled culture”, says part of the written presentation prepared by the National Monuments Council.

“The saltpeter activity was forever damaged by the invention of synthetic nitrate and the Great Depression. It came to be a final blow, from which it never recovered. The way of life, the city planning and the processing systems were unique to this activity and are part of humankind’s past”.

Now one can find only part of the original installments, since they have been progressively dismantled, even after the Monuments Council declared them to be National Monuments, in 1970. There was endless looting and vandalism while they were under private administration. In 2002 they were auctioned and won back by the Chilean State, which has taken care of them through the Saltpeter Museum Corporation. It has been this institution the one to preserve and promote their patrimony, always considering about soon transforming it into a site-museum.

Saltpeter (or sodium nitrate) was used for a while as an explosive, and as such was exported to Peru. It could be found in the Northern pampas, from Tarapaca to Antofagasta. During the first half of 19th century its fertilizing qualities were discovered, and so began the shipments to the US and Europe. Around the year 1839 the international demand was so big that motivated the arrival of all kinds of investors (Chilean and foreign). The land was then part of Peru and Bolivia’s territory. The amount of profits involved  was one of the main reasons for what was then called the Pacific War, after which (1884) the territory would be annexed to Chile.

The production and export of saltpeter became a key element for international agriculture development and for Chile’ economic, social and political progress as well. What was then created around it was a large commercial and production system, and also a way of life and culture that would come to distinguish the area, and which combined the wealth of a cosmopolitan city (so was back then Iquique) with the strengthening of a social movement, borne by the sweat of workers who started fighting for their rights. It’s an identity marked by the tenacity, effort, enterprising spirit and creativity that they needed to develop in order to live in such a hostile and solitary environment.

Humberstone was built in 1872 under the name of La Palma. It became the region’s most important office, but —the same as Santa Laura— it had to stop working around the time of the Big Depression. The activities were resumed in 1933, this time under the name Santiago Humberstone, as an homage to the British chemist who adapted the nitrate industry to a new elaboration system called Schanks —the one used in Humberstone and Santa Laura.

Its biggest growth happened between the years of 1933 and 1940, when more than 3,700 people came to live in the zone. A big crisis forced its closing along with the ones then known as the Nebraska Group (Santa Laura, Nebrasca, Peña Chica and Keryma), all of which were auctioned in 1962 and ended up in private hands.

Industrial patrimony
After the extraction of the caliche, the mineral was carried to the milling and grounded. In the so- called “cachuchos” (iron tanks) it was then heated by way of steam. This produced the dissolution or lixviation The material that was obtained was a saturation of sodium nitrate, and had to be cleared in iron tanks called “chulladores” were the essence was decanted.

What came through was pumped to big tanks were one could obtain the “sodic saltpeter”; a new pouring off resulted in what was the “potassium saltpeter”. The remains were used in the making of other salts, such as iodine.

In Santa Laura one can still see the main industrial structures of a Schanks saltpeter work. There is the milling tank (made of stone, wood or zinc), in which there are three “chancadoras”. There’s also a big structure made of pine-wood pillars and beams, which sustains the tanks; and also a large chimney (40 mts. tall). It can be considered to be the most typical of the Santa Laura constructions, and has become an important site in the middle of Pampa’s arid landscape.

The so called “iodine house” still keeps some of the tools then used. There’s also a building with offices, workshops, and a big room that was then used as a factory. A huge tank for the remains still stands, taking up about 300,000 square meters. There’s also remains of the railway tracks that used to connect Santa Laura and Humberstone by way of the “saltpeter train”.

The Santa Laura human settlement has been almost completely destroyed. One can see no more than the school and very few houses. There are also some traces of the main square and sports field, as well as the management office and the park that used to be right by its side.

There’s big damage in the industrial buildings at Humberstone, but some traces allow us to figure out how life used to be here, considering an urban planning and design based on the concepts then developed by the new architectural movements (post-Industrial Revolution).

One is able to see what was then the office’s social, commercial and public center. The chapel has been restored, and there’s also a shopping area built with decorative white arches, as well as a magnificent theater built on wood. The former hotel has also been restored and now serves as a restaurant. There’s also the remains of what used to be a social club, a large pool, the school and the main square. Some of these are restored, and some are already in the process of being fixed. Most of them still keep the original furniture, such as the theater’s armchairs, the shops’ counter and shelves, or the hotel’s large iron kitchen.

The management house, built in 1833, is very typical of the British style. There’s only two of them left: the one at Humberstone and that at Iris. At the entrance of Humberstone one sees the former houses of workers. Their conservation state is far from ideal, but they offer an excellent example of how the Pampa camp used to be, built in adobe and partition walls, and settled like a chessboard. The huge waste-tank by the office speaks of a time of great wealth, built with the effort of these now gone people.