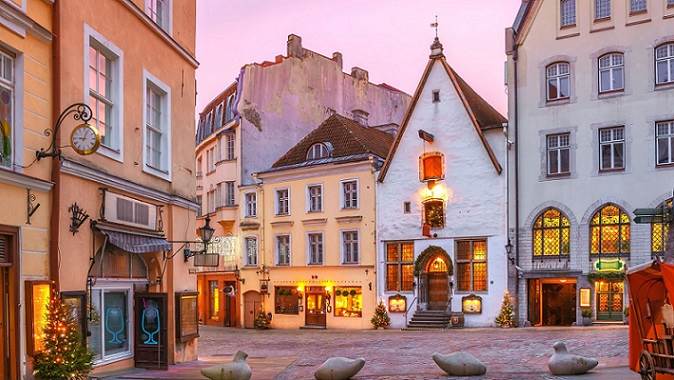 Medieval buildings, cobbled streets, terracotta rooftops, quaint cafes and…smoked fish on the breakfast buffet? Welcome to Tallinn! The capital of Estonia, Tallinn lies on the coast of the Gulf of Finland and is one of the must see destinations in the Baltic’s. Like stepping back in time, the city is home to one of the most well preserved Old Towns in Eastern Europe. Since making the list of UNESCO world heritage sites in 1997, Tallinn has slowly been flourishing into the quaint cultural hub that so many travellers are attracted to today. Only have a day but want to squeeze in as much as possible? Follow our guide to find out how to spend a day in Tallinn.

Wake up early and indulge in a traditional Baltic breakfast. Head into Raekoja plats,  the main square of the Old Town. From here you can admire the beautiful old houses in the main square. This is the setting for many cafes, restaurants, markets and music concerts throughout the year.

Make your way to the Alexander Nevsky Cathedral, the Russian Orthodox cathedral named for the duke who attacked southeastern Estonia in the 13th century. Completed in 1900, legend has it that the cathedral was built on the grave of Estonian hero Kalev. Seen as a symbol of oppression during the Soviet Union many authorities called for it to be destroyed, but a lack of funds meant this was never implemented. Since Estonia gained its independence in 1991, the building has now been restored and remains a significant piece of the Old Town. From here you can see Toompea castle; the pink building is now home to the Estonian parliament!

From here make your way to Toompea hill before the crowds ruin the view. Said to be one of the best viewing points of Tallinn, this is the spot for some of those postcard-perfect pictures. Head along Kohtu street, where you will pass St Mary’s Cathedral on the left hand side before continuing along the cobbles to find the viewing point on your right.

Now that you have your photos with minimal crowd interference, wander back down into the Old Town and explore some of the local handcrafts. You will likely pass some artists on the way, capturing the beauty of the town. Head back to the square and pop into the oldest working pharmacy in Europe. While still an operating pharmacy, it is now mostly a museum where you can view the weird and wonderful medicines that used to be on offer in the 15th century. Prepared wolf guts, billy goat blood and stallion hooves, anyone? Spend some time exploring the local alleys and you may just pick up some treasures.

Follow the scent of chocolate and try out Pierre Chocolaterie, a 19th century style cafe where the master chocolatier makes delicious truffles. Enjoy a cake and coffee and spend some time watching the world go by. A hit with both travellers and locals, you will enjoy the cosy and relaxing atmosphere while giving those feet a rest!

Wander to the most northern part of the Old Town and check out St Olav’s church. Entry is €3 and if you are feeling fit you may want to climb the 258 stairs to the top for some more spectacular views of the Old Town and surrounding area. Dating back to the 12th century, the tower was once used as a KGB watch tower. Make sure to pass through Katariina Käik on your way, one of the most gorgeous little streets in the town.

Once your legs no longer feel like jelly, it’s time to explore some of Tallinn’s neighbourhoods in order to appreciate the contrast between the old and the new. Head down Narva Maantee and into Kadriorg. You can either walk down the main street or hop on a tram. One of the most desirable neighbourhoods, it is home to the beautiful Kadriorg Park where you can see the Presidential Palace. Before strolling the park, head to NOP cafe for a spot of lunch. This hipster hotspot serves fresh organic meals and can cater to a range of dietary requirements. With some local delicacies thrown in such as the Baltic fish, or the alternative sweet potato pancakes you are sure to find something to refuel for the day.

Admire the palace gardens and perhaps explore the art museums of Tallinn, as both the Kadriorg Art Museum and The Art Museum of Estonia are both located here.

Head back towards the Old Town and get ready to explore another up and coming neighbourhood of Tallinn. Kalamaja is located on the coast of the Tallinn Bay and has historically served as the main fishing harbour. During the occupation of the Baltic states however, the area was used as the base for Soviet armed forces. Fast developing from its industrial complexes Kalamaja is now a magnet for young creatives who are turning the empty spaces into cafes, bars, pop up restaurants, local design shops and creative havens. The district is home to many of Tallinn’s impressive wooden houses making it a wonderfully picturesque and historic area to wonder.

After you are done admiring the street art, grabbing a snack in one of the many eateries or just watching the locals go about their daily grinds, then head over to the Telliskivi Loomelinnak. This revamped factory gives way to a theatre space, open mic nights, a weekly flea market, dance workshops and many more enterprises. Just like the ruin bars in Budapest, the next generation are finding new and exciting ways of restoring these abandoned and eerie buildings and bringing them into the 21st century; shaking off the haunting and negative connotations of soviet times as they go.

End your day with a traditional Estonian meal where it all started; Tallinn Old Town square. Olde Hansa will provide an atmospheric and enjoyable evening while sampling some traditional Estonian cuisine. Albeit a little kitschy, the staff wear medieval costumes and often put on musical performances for the guests. Once the sun sets, you can start to enjoy the local nightlife with lots of traditional pubs and bars. Or how about check out the walking ghost tour of the Old Town? With so many myths and legends to be told, you will surely be gripped!