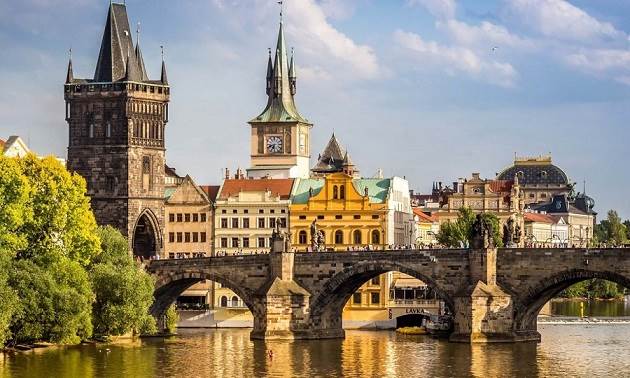 The capital of the Czech Republic is steeped in culture, history and unprecedented beauty. Its city streets teem with people popping in and out of cafes, restaurants, boutique shops and galleries. Prague, one of the most handsome cities in Europe architecturally is renowned as the city of a hundred spires where the vistas across it from higher ground are truly breathtaking.

With UNESCO World Heritage Sites, the locals’ dark yet endearing sense of humour, quirky attractions alongside beer, beer and more beer, there’s much to enjoy in the city of Prague, but how many days in Prague should you spend ? Luckily for you we’ve compiled a little itinerary for what you can expect to see within a set number of days. Maybe you’ve got a whole week to spare, or you’ve only got a day left to explore after a business trip, whatever the case, we’ve got a plan for you. How Many Days Should I Spend in Prague?

With just enough time to get the sights seen and a taste for local culture, a day gives you a chance to see the main attractions around the city. Make your way up to the high reaches of the left bank to Prague Castle. From here you can marvel at both the monumental power that this fortress emits as well as look down upon the river and people meandering below you, imagining for a moment that you run this citadel.

Take a look around the grounds, which are free of admissions charges and perhaps even wander the castle walls for yourself for which tickets can be bought at the entrance. You can admire St. Vitus Cathedral from here, which is also situated atop the left bank.

From this point, take a stroll back towards the city centre and cross Charles Bridge, one of the highlights of the city. With baroque statues adorning the bridge’s boundaries and towers at either end, it’s a symbol of Prague’s architectural prowess.

Move on from here to Prague’s astronomical clock, which on the hour, every hour attracts dozens of people to its hypnotic chimes. Stand beneath it, watching as people are mesmerised by its hypnotic sounds in combination with its aesthetics.

Head next to Wenceslas Square, the centrepoint of the city, both geographically and historically. Here, the fall of communism in the region was announced, among countless other moments of interest in the city’s past. You will be able to feel the emotions that the city has felt, simply standing a moment; breathing it in.

From this point you’ll have a wealth of restaurants, pubs and cafes to choose between for a late lunch. If the weather is nice, grab a seat outside, soaking in the atmosphere of locals and tourists going about their business, or use this as an opportunity to get to know people over a few of the country’s famous Pilsners.

Use the above as a starting point for your first day. You’ve got the luxury of slightly more time, so it’s time to go deeper into the culture and local architecture. Now you have your bearings of the city centre, there’s a number of sights in and around here that deserve your time.

For fans of the Art-Nouveau movement, the city’s Municipal House deserves your fullest attention. Restored in the 1990s after decades of decay and neglect, the building has been magnificently re-imagined with decorative hallways and elaborate detailing. The building hosts a restaurant with equal attention given to the movement’s famed styling.

If you’re still not sufficiently Nouveau-ed out, head to Mucha Museum , home to a collection of works by the famed artist Alfons Mucha. Alongside posters, decorative panels and paintings around each corner, it’s also a documentary of his life, with photographs of his studio life in Paris.

If you are craving more historical architecture, visit the Church of Our Lady Before Tyn, the city’s Old Town Hall – founded in 1338, and the Convent of St. Agnes, all within walking distance of one another with each offering their own unique beauty which collectively cement Prague’s physical appearance in whole.

If you have that much time, then the question “How many days in Prague should I spend?” seems irrelevant.

For the traveler with time on their hands, Prague has much more to see and do. Split the above activities up into four days to really make the most of each attraction. Then incorporate the following into your trip as and when you have time.

Loreta, a nearby baroque place of pilgrimage is worth making your own special journey to. It was designed as homage to the sacred site of Santa Casa in the holy land, which was believed to have been carried by angels to the town of Loreto, Italy, when Nazareth was being advanced on by the Turkish.

Venture to the edges of Prague to find a plethora of activities and cultural focal points. The Strahov Library , a monastic library with great baroque era halls. It’s the largest of its kind in the Czech Republic and offers visitors the chance to marvel at its detailed ceiling designs as well as the enormity of the rooms themselves.

Make certain to visit Petřín Lookout Tower and take in stunning views of the whole of Prague at some point during your stay. This park is also the perfect spot for a bit of shaded relaxation beneath tree lines, to reflect on how well the city has treated you on your visit.

To really take in Prague’s beer culture, head to Beer Geek, a new wave multi-tap pub serving beers from both local and national brewers to international producers. With 32 taps in total, you’ll be hard pressed to find a more complete selection.

Prague has so much depth that no matter how much or how little time you have to give to it, you will end up utterly fulfilled with your choice to visit. Just book a trip with whatever spare time you have.