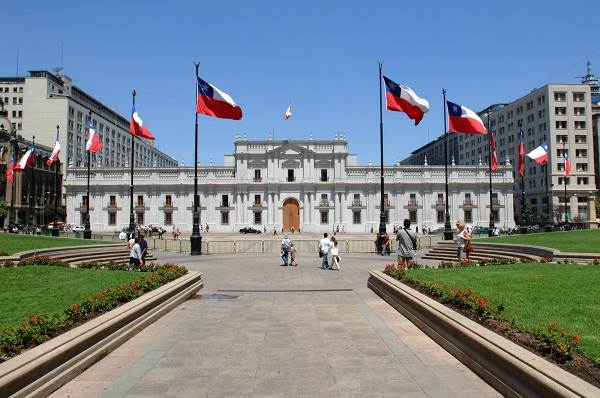 The capital of Chile still has old and majestic mansions that commemorate its past. Houses and palaces that were not only mute witnesses of the traditions, customs and anecdotes of an epoch, but were also the home of important personages of the country’s history and culture.

The following are the main buildings in Santiago that have been witnesses to Chile’s cultural and political history:

Palacio de La Moneda
This is one of the most emblematic edifices, because it has been the Chilean Presidential Palace since 1846. It was built by Italian architect Joaquín Toesca y Ricci and its construction took 15 years to complete (1784 to 1799). Its name (Mint Palace in English) is due to the fact that the building originally housed the national mint. It is situated near the Plaza de la Constitución and the Plaza de la Ciudadanía.

Palacio Cousiño
This palace was built between 1870 and 1878 by French architect Paul Lathoud for the Cousiño Goyenechea family. In 1940 it was placed on auction with all its furniture and accoutrements, but the mayor of Santiago at that time, Rafael Pacheco Sty, came to an agreement with the family and they practically donated the property to the municipality of Santiago for the sum of three million pesos in bonds, on condition that the palace would be conserved just as it was.

Declared a National Monument in 1981, the palace has been used to house the great political figures of the world visiting Santiago. Israeli chancellor Golda Meir; presidents López Mateos of Mexico, Lübke of Germany, Saragat of Italy, De Gaulle of France and king Baudouin of Belgium, were some of the personages accommodated in this beautiful building. Unfortunately this ceased in 1968 due to a fire that completely destroyed the second floor.

Correo Central de Santiago
This building, the current central office of the national postal service Correos Chile, is extremely important for Chilean heritage because it was the first house to be built in the city and was the home of Spanish conquistador Pedro de Valdivia.

But that isn’t all. During the colonial period it was the Governors’ Residence and also served as the Presidential Palace up until 1846, when president Manuel Bulnes transferred the presidential seat and residence to the Palacio de La Moneda. The building is located in the Plaza de Armas.

Casa de Allende
Located in Tomás Moro 200, in the municipality of Las Condes, this huge house was declared a Historic Monument in 2007. This was the residence of Chilean president Salvador Allende and his family until September 11, 1973, the date on which it was bombed by the Chilean Air Force, as was the Palacio de La Moneda. It currently houses the Consejo Nacional de Protección a la Ancianidad (Conapran – National Council for the Protection of Senior Citizens) and some of the decorative objects belonging to the former president, such as his desk and some lamps, can still be viewed there.

Casa Museo Eduardo Frei Montalva
Situated in the municipality of Providencia, at Hindenburg 683, this is the only house of a former president of Chile that is still entirely standing and has been transformed into a museum. Its furniture and appointments, consisting of more than 350 original objects, make it possible to take a journey through 20th century Chilean history. Given the good condition of the building and because it is part of the collective memory of a major historic-political period of the country, the house was declared a National Monument in 2005.

«La Chascona»
And if we’re talking of magic and history, this house deserves special mention. Located on one of the slopes of the Cerro San Cristóbal, the residence used by Chilean poet Pablo Neruda when he was in Santiago is a cultural legacy for the history of Chile. It is made out of materials carefully selected by the poet and currently includes a library managed by Fundación Neruda. It is located at Fernando Márquez de la Plata 019, in the bohemian Bellavista district of the capital.

Casa Colorada
This was declared a Historic Monument in 1960 and belongs to the Municipality of Santiago. Today it houses the Museo de Santiago, Corporación del Patrimonio Cultural and Fundación Vicente Huidobro. It used to be the home of Mateo de Toro Zambrano y Ureta, president of the First Government Junta of Chile, who was also known as the “Conde de la Conquista” (Count of the Conquest). It is situated at Merced 860 in the center of the city, half a block away from the Plaza de Armas, the Cathedral and the Central Post Office.

Palacio Bruna
Located in Merced 230, this is currently the base of the National Chamber of Commerce. Its construction, inspired by the Italian Renaissance, was commissioned by saltpeter entrepreneur Augusto Bruna. In 1922 the building became the residence of the Ambassador of the United States to Chile, and in 1962 it became the U.S. Consulate. It was declared a Historic Monument in 1995, when it was taken over by the National Chamber of Commerce.