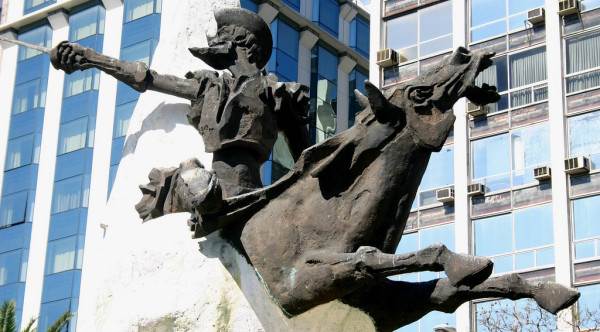 Have you ever reached that point of traveling where everything starts to look the same? Same city landscape, same South American food, same language, same music, etc. It’s a common backpacker issue – travel burnout. You start acting like one of those package-tourists. You come, you snap a photo of the “important” site, and you head back to your hostel/hotel.

There is so much more to see in your travels than what is listed under the “must see” section in your Lonely Planet. Well, here is a travel challenge that will help you slow down, take a second look, and remember that you are having the trip of a lifetime.

This famous Spanish novel is from Spain but the story and the main hero – Don Quixote – is just as loved in Central and South America. From paintings to sculpture to street graffiti, Don Quixote is one of the most recognizable figure in South America. How many places can you find this much-loved Spanish icon? The Adventures of Don Quixote

I have to admit that when I first came to South America, I didn’t really know who Don Quixote was. I did notice all the interesting art and sculptures depicting the same knight. I began to ask questions and eventually figured out who he was. I vaguely remember seeing a cartoon adaptation of Don Quixote as a kid but I didn’t remember anything of the story other than the fight with the windmill. Children in South America grow up with this story though. The same way reading Shakespeare is required in most schools in the English speaking world, reading Don Quixote is required in most schools in Spanish speaking countries.

The story was written by Miguel de Cervantes and follows the adventures and misadventures of Don Quixote and his trusted squire Sancho Panza. It was published in a two volume set, the first book in 1605 and the second in 1615, and is often called the most influential piece of Spanish literature ever written.

How to Spot Don Quixote

So, your challenge is to spot Don Quixote as many times as possible in your trip… but how do you do that? Don Quixote is such a recognizable character in Latin America that art pieces depicting him are often not even labeled. Your best bet is to look for a tall, skin man dressed as a knight. Unlike representations of real knights and Spanish historical figures, Don Quixote is often given a humorous or tortured look. He is sometimes depicted with his horse or sidekick Sancho Panza (a short, fat man). If you’re not sure, ask a local. Everyone knows who Don Quixote is and they will be more than happy to point him out for you if he is represented nearby.