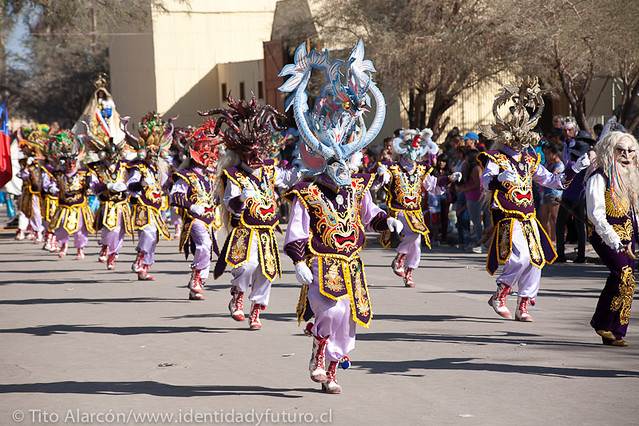 The town of La Tirana, with a population of no more than 500 people, receives over 250.000 visitors between July 10th and July 17th each year to enjoy one of the most colorful and mystic festivals of Chile: Fiesta de La Tirana. This religious festival is one of the most important in the north and gathers thousands of followers to celebrate the Del Carmen virgin each year.

This story dates back to 1535, when the Spanish conquistador Diego de Almagro leaves Cuzco heading for the conquest of Chile. Within the group that followed Diego de Almagro were an inca priest named Huillac Huma and his daughter Ñusta Huillac, hostages of the expedition group. When the expedition was traveling near the La Tirana area, Ñusta Huillac with her father and other followers escaped to the Pampa del Tamarugal, where they organized a rebellion and fought the Spanish for the next 4 years. During this period Ñusta Huillac came to be known as “La Tirana del Tamarugal” (the tyrant of the Tamarugal) due to her brutal treatment towards prisoners.

One day, a young Portuguese explorer named Vasco de Almeyda was taken prisoner by Ñusta and sentenced to death on account of his christian faith. However, Ñusta grew close to Vasco de Almayda and fell deeply in love. He managed to convince her to get baptized, so they could be together forever. During the ceremony of baptism the lovers were discovered by Ñusta’s followers. Feeling betrayed by their leader they killed them on the spot.

Many years later an evangelist priest found a cross in the tamarugo forest and, after learning what happened, had a church built on the same spot he found the cross. The church remains to this day and was named “Nuestra Señora del Carmen de La Tirana”, honoring the couple.

Each year around 200 dance groups arrive to Tirana from different northern regions and some from Peru and Bolivia to take part in this beautiful tradition.This festival is known for its notable dances like “diabladas”, “chinos”, “indios”, “antawaras” and its colorful dresses, which bewitch visitors with an environment full of music and colors in the middle of the dry and arid Atacama desert. This spectacular contrast can only be experienced in northern Chile.

Dance groups start arriving to the town. Streets get filled with shops waiting for the endless number of visitors that start to arrive to the town en masse.Pilgrims arrive on cars, buses, walking and some even crawling with bleeding knees and helped by relatives or Red Cross assistants. The town of La Tirana and the properly adorned figure of the virgin await the arrival of anyone willing to take part in this festivity. The town comes to life.

Dances start, with the different groups performing one by one through the streets of La Tirana and starting to pay homage to the virgin. These dances extend to July 16th.Dance groups do not exceed 20 participants and are always led by the person with the most eye-catching mask, like devil, wolf, bird or fantasy masks. The pilgrims and spectators accommodate on the streets to enjoy the spectacle.

The “Víspera” (eve) of the festival is celebrated. Dance groups gather on the town square where bonfires are made and dancers dance around the fire in preparation for the next day.

At 00:00 hrs the festival hits its most impressive point, with fireworks that mix with colorful dances and chants that become more intense.A mass is celebrated at the town square for the thousands of pilgrims, and during the evening a procession is made through the streets with the figure of the virgin. This is the most important day of the festival, being considered the festive day of the virgin for the northern Chilean people.

The festival and dances conclude. Many people remain in La Tirana, continuing celebrations for a couple more days.For those who want to enjoy something special and unique, the Fiesta de La Tirana festival offers the chance to experience an exciting celebration, where you can soak the mysticism and charm of the north of Chile. Ideal for a new backpacker experience.

1. Security: Take care of your belongings, specially if you decide to go camping free of cost in the surrounding areas of La Tirana, since thousands of people go to the festival and there are no guards. Paying for a hostel or campsite is a safer alternative.

2. Gastronomy: Do not miss the chance to taste llama meat, which is typical of the region.

3. Trash: DO NOT leave trash, be responsible!

4. Clothing and gear: Bring light clothing to use during the day, since it can get really hot. Bringing sandals is not recommended though, because there is a lot of dust. Sunscreen is a necessity. Bring warm clothes as well, since temperature can drop drastically at night. Weather in the desert is complicated, therefore bringing adequate clothing is fundamental to enjoy the festival.