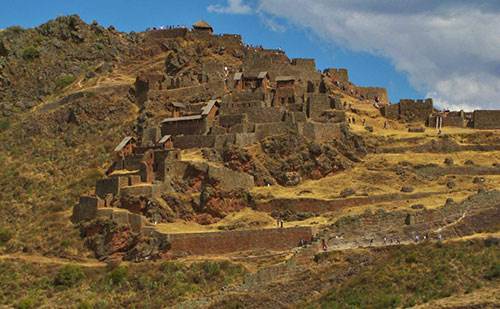 Naturally, one of the first things we wonder about is the name: was it really holy or is it just a dramatic pseudonym of more modern times? Our local guide has the answer and, after all, it doesn’t come as a surprise: the Incas did bow down to the grandeur and richness of this valley and expressed it in their official language Quechua. But in reality, they first had the river on mind and they referred to it as Huillca Mayu (Huillca=Sacred; Mayu=River) as it had so beautifully sculpted the valley that the Incas were now turning into the economic and religious heart of their homeland, adding to the landscape a string of palaces, shrines and retreats. More unfeeling bureaucrats of both colonial and republican epochs used other terms but the eruption of tourism some 60 years ago brought along some kind of resurrection of the original and due name, although now translated into modern languages and applied mainly to the valley: the Sacred Valley.

Exploring this area has a little cost: high altitude and its thin air. Fortunately, we’re not caught by surprise as we’ve done our homework and researched in advance: we drink plenty of liquids (no, alcohol doesn’t count), we keep away from fatty or heavy meals, at least for the first few days (so that tempting ‘Guinea pig and potato wedges’ should be postponed, just in case), we indulge ourselves in copious amounts of coca tea (overdose is an utter impossibility) and we will try not run madly around the ruins looking for the best shots. Also, one night’s sleep in Cusco does a lot for acclimatization and it may also help that the Sacred Valley is a little lower than Cusco –Ollantaytambo for instance, is located at only 2,800m. Actually, all of this soon seems irrelevant as we find ourselves so entertained that we don’t even think about the altitude anymore, except perhaps when we climb a few steps.

One of our first stops is an alpaca and llama farm: Awanacancha. Don’t know yet how to tell them apart? Well, this is the right place to learn as they are literally rubbing shoulders here, and they even seem to be pulling faces for our pictures. A few minutes later we catch our first taste of the fabled valley: a magnificent view of the old river snaking through a deep green valley and often running against the steep rocky hills. A narrow modern road also runs along but it doesn’t keep us from reliving the Incas’ affection for this portion of their country.

We take a detour off the main road to climb up to Pisac ruins, which sits atop a steep hill near the South-eastern end of the valley. The Incas’ passion for moving and cutting rocks is quite evident here and one understands that without them it would have been nearly impossible to finish such edifices, so there is simply no need to resort to alien intervention to explain their accomplishments. Pisac is one of the most important in a series of ruins and it seems like it had three functions: defence, worship and agriculture. Then again, almost every Inca building was multi-purpose as their conception of the world, however influenced by spirituality, was also pragmatic. The Inca Pisac is followed by a visit to the Spanish Pisac, a typical Andean village with its graceful main square at the centre, now permanently occupied by a colourful market where all sorts of local merchandise threaten to empty our pockets. You can practice your bargaining skills here or maybe your Spanish as a simple ‘No gracias’ should suffice to distance yourself from business. But be warned, there’s always something that you may find irresistible.

The landscape also speaks for itself. Towering mountains in every direction, a winding river that seems perfect for white-water rafting, a clear sky (at least most of times) and such fresh and clean air. But it’s not only the natural beauty but the man-made too. Besides the archaeological sites there are neat agricultural terraces that occupy almost every fertile piece of the surrounding hills thus maximizing the food output. Some are actually out of use now but it takes little effort to picture a scene of hard-working Incas everywhere you looked putting into practice their vast knowledge on agricultural techniques, for some areas within the Sacred Valley served the specific purpose of experimentation on varieties of seeds, crossbreeding and efficient irrigation technologies. It was a big and harsh country after all, with a population over 8 million spread across an extremely difficult geography. Providing for so many must have been quite a challenge that we sometimes tend to overlook as we feel more inclined to admire the Inca’s main artistic legacy: their command of masonry. But none of that would have been possible without the organization and ability for statecraft that led them to create one of the most harmonic societies on Earth. Do I seem biased by my being Peruvian? Probably, but I can actually cite some passages, among the thousands written by Spanish eyewitnesses at the time of the conquest, which may give a more objective view: ‘… (The Inca ruler) kept such excellent order that the entire country was calm and all were nourished…’; ‘… It is clear that the government in the past was better and more valuable: for under the Inca’s rule the Indians were always on the increase’.

After lunch in Pisac (or Urubambasometimes)and at an altitude of only 2,900m we are ready to continue. Ollantaytambo is the furthest of the Inca sites and it certainly is worth the extra hour-and-a-half’s drive. It consists of an imposing complex of Inca terraces and buildings looking out over a town designed by the Incas themselves. Despite the various changes of recent times, the village is considered one of the oldest continually inhabited villages of the continent as several foundations, the Inca grid of streets and even some names of the original blocks have survived. One of the first impressions is that the massive terraces must have been designed as a fortification and there seems to be no doubt about it when you hear of the epic battle that took place here as part of the Incas’ endeavours at resisting the Spanish invasion. Their true use however was agricultural but at a very sophisticated level since this site was an Inca royal estate. The experience of exploring this site is literally breath-taking, mainly because of its charm but also due to the effort it takes to climb up such high and broad terraces. It is all rewarding though: the Sun temple on top, again the views but mostly that special feeling that must be the closest thing to time travel. Ollantaytambo is therefore the perfect place as an introduction and prelude to the unique experiences of either the Inca Trail or Machu Picchu.

The Sacred Valley offers even more: the village and Inca site of Chinchero, set in the uppermost end of the valley, the salt mines of Maras, the enormous amphitheatre-like terraces of Moray… Obviously, so much is bound to take more than one day but what has been picked to be included in a ‘traditional’ Sacred Valley tour is guaranteed to begin a fascination for the Inca world here in their heartland, where they once enjoyed life and where their descendants still live in dignified and pleasant ways, proud of their heritage and still persistently rooted in ancient traditions. Such a setting can surely make even a single-day excursion a memorable one.