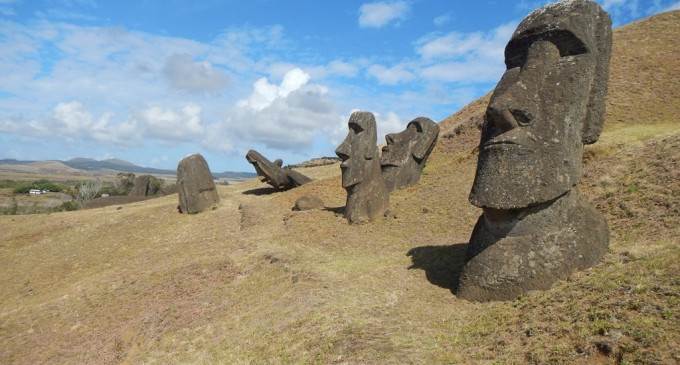 What can be said about Easter Island? People throw around words like majestic, breathtaking and life-changing. When I hear that I tend to revert into my cynical shell, roll my eyes and respond with a perfunctory ‘I’m sure it was. Now please go away so my ears can be relieved of your obnoxious exaggerations.’

EASTER ISLAND — Having said that, I must say that if there were to be locations that have scaled quite high atop the mysterious peaks of profundity, then the areas that I’ve been fortunate enough to have visited within Chile’s diverse make-up would rise far higher than most, and I would be remiss if I failed to include the isolated, but culture-rich Easter Island on that list.

Easter Island encompasses close to 64 square miles in the South Pacific, and is considered the Southeastern corner of the Polynesian triangle (the other two vertices being of course Hawaii and Tahiti). It is located roughly 2,300 miles from Chile’s coastline and 2,500 miles east of Tahiti.

Locally Rapa Nui, it was given the name Easter Island by Dutch explorers to honor the day of their arrival in 1722.

The Island was annexed by Chile on September 9, 1888 by Policarpo Toro by way of el ‘Tratado de Anexion de la Isla’ – the treaty was agreed upon mutually by the Chilean government and by the Rapa Nui leaders.

Mataveri International Airport is the island’s only airport and, in the 1980s, its runway was lengthened at the behest of the U.S. space program so that it could be used as an emergency space shuttle landing site if need be, effectively granting other wide-bodied aircrafts access to the airport, which afforded the island greater accessibility to global tourism.

Another fun fact: there are an estimated 500 wild horses that roam freely about the island.

Tourists who have been seeking this remote destination typically have some ancient, giant figures on their minds prior to arrival: the near 900 Moai statues that are scattered about the island, but most densely concentrated in the Rano Raruku quarry, which is home to around 400 statues in varying stages of completion.

Believed to have been created between 1400 and 1600 C.E., most of the statues stand with their backs to the sea and are believed by most archaeologists to represent the spirits of ancestors. But here is where facts and theories collide with hearsay and 500 year-old oral tradition. Why were these statues erected? It is really impossible to be certain.

The Moai are large, quite spectacular and unlike anything you will ever again see, making a trip to view them well worth your time.

Before coming you can ponder the ever exhausted question of how these behemoths were transported from quarry to coast. There are theories a plenty – from extra-terrestrial involvement to divine power administration to feats of ingenious ancient engineering.

My personal favorite, drawn up by theorists Pavel Pavel and Thor Heyerdahl, is the ‘Moai Walk’ theorem – but in lieu of divine intervention, the pragmatics believe that the transporters would have used a rope system where, with the Moai’s inherent low center of gravity, a team would pull the statue in a swivel type of motion to its final destination; hence, ostensibly they would be ‘walking’ the Moai to its preferred location along the coastline or to the village which had put in an order to the master carver.

Other reasons to visit

Most anywhere you look a gorgeous ocean view will be awaiting you. During my brief stay, we hired a guide for the day. She asked each of us what it was that we saw when we looked out deep into to this endless ocean. Waves, cloud shadows, land were our responses.

She explained that the Rapa Nui saw roads within the infinity of the ocean and were a masterful seafaring people.

She would adamantly contend any theorists who would claim that the Rapa Nui sailed with the mere hope of reaching land and that, instead, they could determine the precise direction of their destination whilst sailing the open ocean with as much accuracy as drivers today could behind the wheel.

This expertise in nautical navigation would of course include celestial guidance, but more so, our guide explained, it was based on an intuitive knowledge of the ocean itself, the flow of the currents, the direction of the wind and how the birds and sea life reacted to its seasonal alterations.

The Rapa Nui led expeditions to mainland Chile, bringing back with them knowledge enough to leave samplings on the island of similar stone structures as those ever-so expertly crafted ¿during the time of the Inca.

If history, myth, culture, tradition or giant statues carved out of volcanic rock don’t tickle your fancy, then there is a beautiful beach, amiable people and a ‘buena onda’ that is to be expected within the parameters of island living.

If I were to recommend a place to stay, it would have to be Hotel Hangaroa Eco Village. A stunning place with wonderful architecture, delicious meals, a grand pool and friendly staff.

Located on the southwestern tip of the island, you will be privileged to ocean views as well as close proximity to the airport and will be mere steps away from the town’s center.

When to go
The high season for tourism will be in the summer, but you can make the trip year-round as the weather conditions aren’t to fluctuant. If you’re keen on avoiding the crowds then you may even prefer the off season if you can manage slightly cooler temperatures.