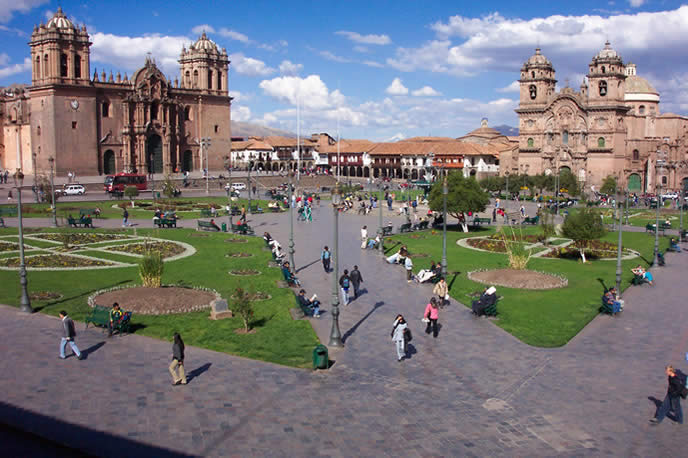 Travellers in the city of Cusco can typically be sorted into two groups – those beaming with uncontrollable excitement about their upcoming trek to Machu Picchu and those jubilantly reminiscing over the incredible experience they’ve had, having just trekked to Machu Picchu. However, this ancient city located amongst the cloud-veiled slopes of the Huatanay Valley is so much more than simply a basecamp.

An intricate blend of Incan and Colonial architecture seamlessly combines in front of a backdrop of rolling green slopes, harbouring all manner of delicious eateries, shops selling local wears and a range of drinking holes perfect for sharing stories with new friends. Cusco also acts as the perfect hub from which to explore the surrounding villages, which are home to local markets and ancient ruins that merit a visit from even the most seasoned traveller. It is impossible not to get swept up in the excitable electricity in the air as fellow travellers prepare for or reminisce over their experiences having visited one of the New 7 Wonders of the World, which lies atop a hill just a few miles away.

The majority of the action in Cusco occurs in and around the Centro Historico, a mesh of historic cobbled streets that has taken on the role of the city’s tourist hub. Foundations built from gigantic blocks of stone remind visitors of the city’s ancient Incan history, whilst copper-toned colonial churches ensure echoes of Spanish rule also remain. However, some of Cusco’s greatest treasures, including the Inca ruins of Saqsaywaman, are found just outside the bustling centre. As it sits in a valley, the walk to these urban outposts can often prove to be an uphill struggle, but they are undoubtedly worth the calories burnt to get there. One admirable feature of central Cusco is the lack of branding on shop fronts, with even the largest global brands having to opt for plain black fonts or a simple wooden plaque outside their establishments. This makes the city itself much easier to appreciate without glaring signs distracting you from every angle. Given Cusco’s small historic centre it’s easy enough to walk to most notable destinations.

Sitting at the heart of Cusco’s Centro Historico is the Plaza de Armas, a grand square bordered by colonial archways and the indomitable facades of both Cusco Cathedral and Iglesia de la Compania de Jesus. Plaza de Armas is the perfect location from which to begin your time in the city, offering historic sights, souvenir-selling backstreets and some of the city’s tastier restaurants all within walking distance. The streets are swimming with energetic tourists seeking adventure and ambitious salesmen looking to make some money. Lose yourself in the narrow, cobbled side streets and lap up the excitable buzz that Cusco’s historic centre has to offer.

Pay a visit to Coricancha to the south of Plaza de Armas. Considered the holiest location on the planet by the Incas, the walls of the original building were once coated in gold before it was stripped clean by the Spanish, who then proceeded to unceremoniously build a church directly on top of it. The structure acts as a poetic visual representation of Peru’s tumultuous history.

Deemed one of Cusco’s more artsy neighbourhoods, the streets of San Blas crawl up the steep slopes to the east of Plaza de Armas before reaching heights that offer panoramic views over the historic city below. The winding alleys are lined with artisanal cafes and restaurants, as well as boutique shops ideal for those with a little more spare cash to spend. There are a number of shops in San Blas specialising in baby alpaca wool jumpers – considered amongst the most luxuriously soft wools in the world. The neighbourhood also offers cultural treats in the form of sites like the simple yet picturesque Iglesia San Blas and the Cathedral of San Cristobal, which can be seen looming over the city from Plaza de Armas.

San Blas was also the primary hub for the Cusco School of Arts movement between the 16th and 18th centuries – an artistic style with heavy religious connotations, notable for its generous use of gold leaf and deep shades of red. To this day, it’s still possible to catch a glimpse of the occasional artist painting in this style within the colonial buildings of the San Blas neighbourhood.

When imagining traditional cuisine in Peru, many wouldn’t consider sandwiches to be amongst the list. However, these individuals would be wrong! San Blas is home to a number of scrumptious sandwich shops, such as the understated Chola Soy, which offers traditional, hearty Peruvian sandwiches that are sure to fill up even the hungriest traveller.

At the southern end of this daily market there are a number of stalls cooking delicious Peruvian recipes using the same fresh ingredients that are on sale just opposite. These stalls provide an excellent and affordable lunch option.

Peering over Cusco from the city’s northern reaches is one of its greatest sights. The historic ruins of Saqsaywaman are an excellent example of the precise stonemasonry from the era of the Inca Empire, with stone blocks so precisely cut and slotted together that there was no need for the use of any mortar. Once a great fortress, Saqsaywaman’s vantage point means that it overlooks Cusco’s sea of red tiled roofs below, allowing visitors to peer over the entirety of the historic city as they explore the ruins’ colossal stone walls.

If you can face the early morning climb, Saqsaywaman also offers Cusco’s best sunrise views. There are few better ways to start the day than standing amongst such significant ancient remnants and watching golden rays of the morning sun slowly coat the terracotta coloured rooftops below.

Pisac Village in the Sacred Valley

Primarily renowned for the hilltop Incan ruins to its north, the village of Pisac is akin to a miniature version of Cusco itself. However, the incredible terraced remains of the Incan settlement aren’t all that Pisac has to offer. The village is made up of cobbled walkways and the classic tiled colonial buildings that one would associate with Cusco, but with a more tranquil atmosphere thanks to its rural setting. Three days a week the village becomes more busy as stalls line the streets for the opening of its famous market. Located roughly 45 minutes from Cusco, local buses and minivans depart for the village at frequent intervals.

The market at Pisac is regarded by some to be better than any that can be found in Cusco itself when it comes to buying souvenirs. So if its llama jumpers and woven Incan wall hangings that you’re after, Pisac may be just the place for you.

Maras in the Sacred Valley

A day trip from Cusco, the small town of Maras itself isn’t a particularly noteworthy location but the sights found in the surrounding hills make it well worth the visit. To the north are the Maras salt mines, which are still operated today just as they were during the reign of the Incas. An interesting complex of tiered rock pools that roughly resemble a patchwork gather water that has filtered down from the hills above, carrying minerals on route to create what is considered amongst some of the best salt that you can buy. To the west of Maras are the ruins of Moray, Incan ruins unlike any other in the region due to the tiers being in concentric circles. Resembling something akin to crop circles, the purpose of the curious shaping of the structure isn’t entirely clear but temperatures can vary by as much as 15 degrees centigrade between the top and the bottom of the ruins.

If you are in Cusco during October try heading to the Moray ruins to witness Moray Raymi, a cultural celebration where hundreds of locals reenact the ceremonies carried out by the Incas as a thank you to their gods. The ceremony is a colourful celebration that gives a tangible experience of how the ruins were used hundreds of years ago.

Cusco provides travellers with a vast range of food options, from cheerful local eateries offering traditional delicacies to higher end restaurants serving gourmet dishes that would keep even the most cultured foodies happy.

One of the best places to taste traditional Peruvian cuisine is the food section of San Pedro Market, with vendors cooking classics like seafood ceviche, a hearty chicken broth in the form of caldo de gallina and salchipapas, a specialty made from fried sausage and potato. If affordability and authenticity is what you’re seeking, it is best to try and steer clear of the area around Plaza de Armas, which tends to cater towards Cusco’s booming tourism industry. Less squeamish travellers looking to truly delve into the Andean food scene will have no trouble locating cuy in Cusco, a whole guinea-pig that has been roasted or fried. Head to restaurants like Restaurant Sumaqcha to sample this truly acquired taste.

From French to Italian, Indian to Thai, the array of global favourites available in Cusco is staggering. Amongst these are some genuinely high end restaurants, particularly around Plaza de Armas and the streets of San Blas. Whilst eating local dishes is an undeniably authentic experience, a gourmet dinner at a restaurant like the veggie-friendly Greens whilst lapping up the energy of Plaza de Armas is a wonderful way to relax after your trek to Machu Picchu. For those looking to find a compromise between an authentic Peruvian experience and fine dining, Cusco is home to a number of upmarket restaurants that serve Andean-inspired delicacies, including Ceviche Seafood Kitchen.

Cusco is home to a chocoholic’s dream museum in the form of ChocoMuseo. This museum not only offers a thorough history on how chocolate has been made in the region over the years, but also gives guests the chance to scoff their way through an array of eccentrically flavoured chocolates. Those who are really crazy about all things cocoa can even attend a “Bean to Bar” chocolate making workshop. The museum also has two shops in the region where visitors can buy their goods, one to the east of Plaza de Armas and one in nearby Pisac.

Alternative things to do in and around Cusco

These hilltop Incan ruins are a quieter alternative to Machu Picchu. Whilst they may not have quite the same grandeur as their more famous neighbour, the ruins at Choquequirao are only accessible via a 4 day trek through the rugged wilderness of the Apurimac Valley, which means that only a dozen or so people will be there at any given time. With nothing but the jungle coated slopes and the sound of the wind to keep you company, you will feel like you’ve discovered a lost world in the Andean heights.

Zipline over the slopes of the Sacred Valley

The steep, green slopes of the Sacred Valley offer the perfect opportunity for adrenaline junkies to fly from one end of the valley to another via steel cables. Soaring over the emerald-coloured valleys whilst dangling upside down is an experience quite unlike any other. There are a number of agencies in Cusco that run zipline tours throughout the surrounding countryside.

Marvel at the colours of Rainbow Mountain

Vinicunca, known colloquially as Rainbow Mountain by tourists, is a high altitude ridge around two hours outside Cusco that takes on a multitude of vibrant colours due to the variety of minerals from which it is composed. Shades of red, blue, green and yellow appear on the surface of the slopes in a mesmerising geological display. The mountain is considered amongst Peru’s most picturesque sights.

Gaze at the galaxy at Cusco’s planetarium

Located just outside of Cusco, the city’s planetarium offers the opportunity to observe the majesty of the stars in the clear night skies above. Tours to the Cusco Planetarium also teach visitors about the ways in which the Incas interpreted the cosmos above, combining the galactic with the historic.