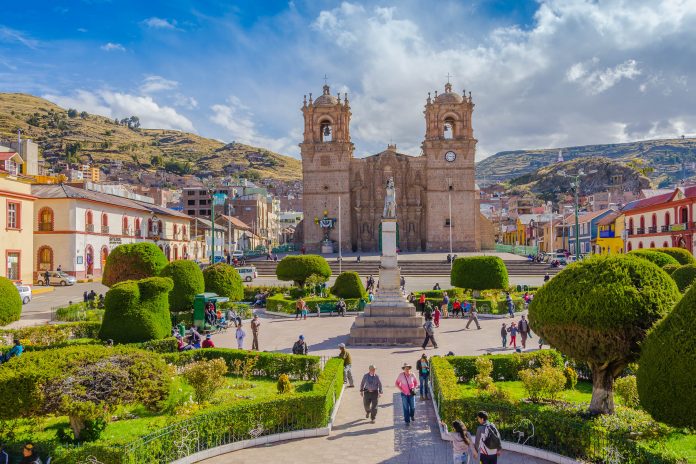 Money Exchange: The currency in Peru is the Nuevo Sol (PEN).

Most are located on Jiron Lima, and all tend to offer similar rates, some change cheques. Travellers’ cheques are generally changed for about 4% less than cash. Try Casa de Cambios “Evi” at Jiron Lima 440, they generally have the best rates. Open Monday-Friday 8am-1pm and 4pm-8pm

Internet: Several places are located on Jiron Lima, and in the area around the hotel, with new ones opening all the time. Costs are around PEN 2 per hour.

Post Office: Jiron Moquegua 267. Open Monday to Saturday from 8.15am-8pm. Stamps for postcards to U.S.A or Canada cost PEN 4.50 and PEN 5 for the rest of the world.

Phone cards are the cheapest and easiest way to call home. Either ‘Hola Peru’ or ‘Tarjeta’ 147 cards. They can be used in any public phone by entering the card number and pin number. Available in PEN 3, 5,10,15,30 & 60 denominations. These can also be purchased in most corner stores.

Inka Bar – Jiron Lima 348. Offers a great mix of modern cuisine and local dishes, good coffees and cocktails in a nice setting. Mains cost about US$10.

Keros – Jiron Lambayeque 131. Good local Peruvian cuisine including guinea pig, alpaca as well as kingfish and trout from the lake.

Apu Salkantay – Jiron Lima 357 has a wide selection of dishes, including pastas, pizza, alpaca, also excellent soups and trout. Also has a couch bar at the rear.

Ekekos –Jr Lima. This is an excellent restaurant with a pleasant decor and a wide and varied menu.

Many other good restaurants located along Jiron Lima offer the standard: from chicken and chips pizzas to more traditional dishes.

Puno lies on the North West shore of Lake Titicaca. Puno is the capital of its department and is Peru’s folkloric centre with a vast array of handicrafts, festivals and costumes and a rich tradition of music and dance.

Puno has a population of approximately 80,000 of which 8,000 are students. The city is located at an altitude of 3,855 metres above sea level, so Puno experiences a bitterly cold climate at night. Clients are advised to take it very easy upon arrival in order to minimise the effects of the altitude, especially if arriving from sea level.

Things to See and Do

The Cathedral – Completed in 1657, it has an impressive baroque exterior, but an austere interior. Beside the cathedral is the balcony of Conde de Lemos where Peru’s Viceroy stayed when he first arrived in the city. A short walk up Independence leads to the Arco Cleustua, which is a monument honouring those killed in the battles of Junin and Ayacucho.

The Yavari – The oldest ship on Lake Titicaca, The Yavari is berthed in the port and is open as a museum and bar. She is moored alongside the jetty from which launches go to Uros, Tequille and Amantani Islands.

The ship was built in England in 1861 and shipped in kit form to Arica, then by train to Tacna, and finally by mule to Lake Titicaca. The entire journey took six years. The Yavari was eventually launched in 1870. The ship is currently being restored by an Anglo-Peruvian collaboration. There is no entry fee although a donation is expected.

Lake Titicaca: Lake Titicaca is the world’s highest navigable lake and the centre of a region where thousands of subsistence farmers eke out a living fishing in its icy waters, growing potatoes in the rocky land at its edge or herding llamas and alpacas.

It is also where traces of the rich indigenous past still cling, resisting centuries of Spanish conquistadores’ aggressive campaigns to erase Inca and pre-Inca cultures and, in recent times, the lure of modernization.

Lake Titicaca was the most sacred body of water in the Inca Empire and now the natural separation between Peru and Bolivia; it has a surface area exceeding 8,000 square kilometres, not counting its more than 30 islands. The area has two climates; chilly and rainy or chilly and dry, in the evenings, it can drop down below zero degrees between June and August. In the day, the sun is intense and sunburn is common.

According to legend, this lake gave birth to the Inca civilization. Before the Incas, the lake and its islands were holy for the Aymara Indians, whose civilization was centred at the Tianhuanaco, now a complex of ruins on the Bolivian side of Titicaca but once a revered temple site with notably advanced irrigation techniques.

Inca legend says the sun god had his children, Manco Capac and his sister consort Mama Ocllo, spring from the frigid waters to found Cuzco and the beginning of the Inca dynasty. Later, during the Spanish conquest, the lake allegedly became a secret depository for the empires gold.

Oceanographer Jacques Cousteau  spent eight weeks using mini submarines to explore the depths of the lake but found no gold.