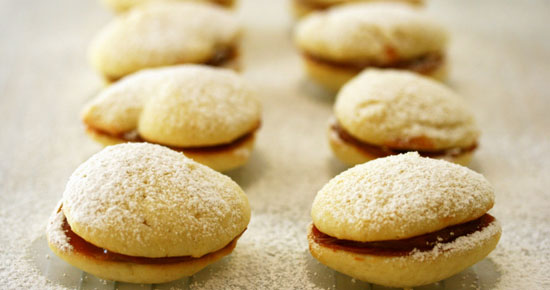 Without doubt, one of Chile’s main attractions is the promise of a delicious seafood dish and a nice bottle of wine. However, Chilean confectionery is an equally appetizing gastronomical proposal for tourists. Pastries, cakes and desserts combine the best of the colonial legacy with typical recipes, with native products and a touch of sophistication.

Chile’s sweet traditions date back to the 16th century, with significant influence from Spanish and French cuisine. Most recipes can be traced to the nuns and other immigrant women who dedicated themselves to adapting local ingredients to recipes they brought from the other side of the world: dulce de membrillo (quince jelly, an Iberian specialty), manjar (caramelized milk, similar to dulce de leche), and alfajores, a pastry from the Middle East.

The sopaipilla, for example, probably owes its name to the Mozarabic word sopaipa, which means “fried dough.” Some say it derives its name from the German suppa, which means “wet bread.” Either way, the sopaipilla is one of Chile’s most popular and traditional snacks, traditionally served on rainy days when the bright orange pumpkin in its dough brings some color to gray skies. The sopaipilla is also a classic feature of indigenous Mapuche food, and the size of the treat varies among regions.

Anyone who has the opportunity to travel around Chile can enjoy a pleasant regional variety of sweets, among which the following should not be missed:

Alfajores: A small treat, made with two biscuits filled with manjar, or maybe some fruit, or chocolate mousse. They are generally bathed in chocolate, glaze, or confectioner’s sugar.

Cuchufli: Similar to the alfajores, this is a traditional Chilean pastry, served by the dozen. A fluffy, crunchy pastry dough is rolled in a long tube, filled with manjar and sometimes drizzled with chocolate.

Leche asada: A traditional baked dessert, similar to Spanish custard, made with milk, eggs, cinnamon and sugar. If you get the chance to eat home-made leche asada, take it! This traditional dessert is time-consuming and expensive, and increasingly found only in supermarkets, but some families still prepare it for special occasions.

Mote con huesillo: A refreshing non-alcoholic beverage served on hot days in the countryside and served with a spoon. Mote is a distinctly Chilean treat, consisting of cooked, fresh husked wheat, and huesillo,  which is a dried peach. The glass comes with a big scoop of mote, a huesillo, and is served with sweet, caramelized peach juice.

Pan de Pascua: A dark-colored sponge cake, seasoned with ginger and honey, and baked with candied fruit, dried currants, walnuts and almonds. It is a traditional dish during Christmas, served during the evening meal, once, with a sweet alcoholic beverage, cola de mono.

Sopaipilla: A fried dough made of wheat flour and cooked pumpkin. It can be served sweet as well as savory, and is eaten as a snack. They can be accompanied with mustard or chili sauce when savory and when eaten sweet they are boiled in water with chancaca, a caramelized sugar, and seasoned with orange peels and cinnamon.

Where to find them?

These sweets and desserts are served in restaurants and homes all over the country, but certain regions are known for specific pastries. For example, the most famous alfajores and Chilean pastries are in the central region. The town of La Ligua prides itself on its alfajores. Traditional factories like Doña Elisa are located in Curacaví, near Santiago, where you can buy a great variety of pastries.

Sopaipillas can be found on almost every street corner in Santiago, where they are served with mustard as a quick snack for university students or late-night partiers. The sweet version with chancaca are sold in Castaño bakeries, and most supermarkets.

When the weather turns hot, sopaipilla signs are exchanged for mote con huesillo signs. The drink is associated with the countryside, and the farther you get from Santiago, the better. Every vendor has a special recipe for their juice, jealously guarded, so taste around to see what you like best. If you make it to the southern city of Chillán, make your way to the row of mote con huesillo stands east of the central plaza, where you can choose from dozens of vendors and enjoy your treat on a shady, historic boulevard.