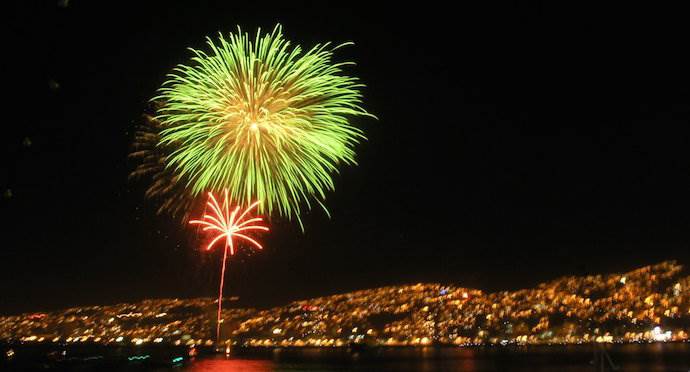 Eating lentils and grapes, wearing yellow clothes or going for a walk with a suitcase are just some of the rituals Chileans do in the New Year’s Eve to attract good luck.

December 31st is for Chileans, and for most people around the world, one of the most important celebrations of the year. In the New Year’s Eve thousands of Chileans decide to go to parties, go to the home of friends or family or celebrate in the streets.

Traditionally, waiting for the New Year in a Chilean household means an abundant dinner, generally including a stuffed turkey or other kind of meat, like chicken or pork. Family members wear special clothes, choosing their best garments for the evening.

After dinner the preparations for the countdown begin. Some families decide to stay at home and turn on the TV or the radio to hear the official countdown, while others prefer to go straight to one of the hundreds of pyrotechnic shows that take place in Chile and receive midnight with fireworks.

But maybe one of the most important aspects of the New Year celebrations are the rituals meant to attract good luck for the upcoming year. From wearing certain colours to going for walks around the block, Chileans usually take part in some traditions that even though are not exclusive of the country, are an important moment of the celebration.

Known around the world is the tradition of eating lentils in New Year’s Eve. According to this, you should eat a spoonful of lentils at midnight to ensure prosperity for the upcoming year.

Following the same line, it is said that eating 12 grapes, one for each stroke of the bell at midnight, would help to fulfill all wishes and projects in the new year. Some even say that the flavour of the grapes, from sweet to sour, would indicate how each month will be.

Other classic tradition is wearing yellow underwear during the New Year celebrations. Yellow would represent vital energy, so wearing this colour would allow you to begin the new year with renewed energies and attract prosperity and abundance.

For those who would like the new year to come with travels, the traditions always goes hand in hand with suitcases. Some people say you have to grab your bag and go for a walk around the block, while others think that standing on the top of a table with the suitcase in your hand or just opening the door and standing there with a bag would do. All of this traditions seek to attract new adventures for the upcoming year.

We have mentioned ideas to call prosperity and abundance, but if you want to attract money to your home, there are some more specific rituals. Some people put money in the form of notes in their right shoe, while others prefer to hold it in their hands at midnight. Coins should be put next to the door to attract good finances.

To attract positive energy for the upcoming year and letting go of the negativity of the finishing year, the recommendation is to receive midnight with open doors and windows. That way, energies would flow freely through the house. To this, some people add a cleaning and tidying day before New Year’s Eve, so the house is purified.