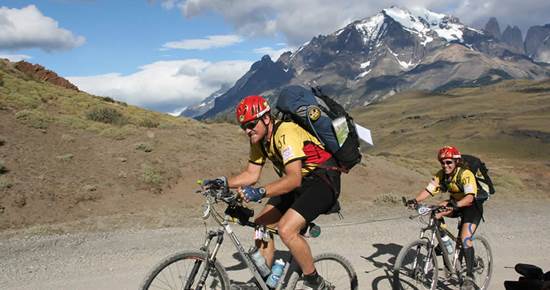 Your legs burn with fatigue, changeable weather tests your resolve and you’re miles away from the nearest town. While to some the challenges of long-distance cycling might sound like the opposite of a holiday, legions of adventurous hobbyists are singing the praises of the Chilean Patagonia as a top-destination for a biking getaway.

A firm favorite with those in the know for a number of years, Chilean Patagonia, and specifically the Carretera Austral region has just been recognized by British publication London Cyclist as one of world’s 10 most iconic bicycle routes.

Still not convinced you want to endure Patagonia’s famous “four seasons-in-a-day climate”? It’s all about the mindset, as London Cyclist writer Stephen Ebbet writes, “For cycling enthusiasts, there is nothing like riding on the open road and witnessing magnificent sights as you ride across the country,” and in Chilean Patagonia there are no shortage of those.

The only country on the continent to feature in the list, Chile stands out for scenery as well as some of the detours available, says Ebbet.

“South America contributes to the world of cycling by offering a tremendous route from Puerto Montt in the central part of Chile south to the Villa O’Higgins which is located in northern Patagonia,” writes Ebbet. “There are incredible stretches of wondrous landscapes, forests and the signature enormous ferns that surround the Puyuhuapi Hot Springs near Queulat.”

Outside of Chile’s brisk southern climes are a range of other options for the intrepid cycling adventurer. Throughout the Andean country the soaring mountains provide a myriad of opportunities for downhill biking with some of the best-known spots found near the capital in Cajón del Maipo and the nearby Parque Nacional La Campana to name a few.

Further to the north, Chile’s spectacular Atacama Desert offers its own range of pedal fodder for two-wheel enthusiasts with several routes offering the chance to explore some of the area’s renowned sites and attractions from the freedom of a bicycle. Just remember to pack water and sunscreen because it gets hot out there!

The lure of Patagonia’s extravagant natural beauty and extreme conditions attracts brave souls from around the world to crash through her rivers, stomp up her mountains, and paddle through her waters.

Indeed, Patagonia is home to several “expedition races,” multi-day, multi-disciplinary races that require individuals and teams to brave the wilderness of the southern tip of the world for a chance to win. One of these, the annual Wenger Patagonian Expedition Race, is next scheduled for February 2012 and requires participants to hike, rock climb, sea kayak and mountain bike through a 10-day course.

After the 2011 Wenger race, one intrepid reporter wrote of his experience competing in the grueling event amidst the stunning natural scenery.

“I have spent almost two months in the region, most of it outdoors and immersed in lands so wild that few humans will ever see them,” writes U.S. reporter Stephen Regenold for the Star Tribune in Minneapolis, Minnesota.

“Patagonia is one of the planet’s last great wild places.”

Headed to Torres del Paine? Be sure to check out the adventure guide’s recommendations for sea kayaking in the Patagonian fjords, accessible from the backpackers’ town of Puerto Natales near the entrance to the national park.

Stuck with extra energy and an extra day in Punta Arenas? Head to the Pali-Aike national park a few hours away, where “worn dirt roads lead to craters and vague trails, rarely traveled and little-known.”

For many, reading an adventure guide just isn’t enough – the only option is to get out there and experience it for yourself. Check out our information on transportation in Chile, and start planning for your next big adventure in the untamed beauty of Patagonia.