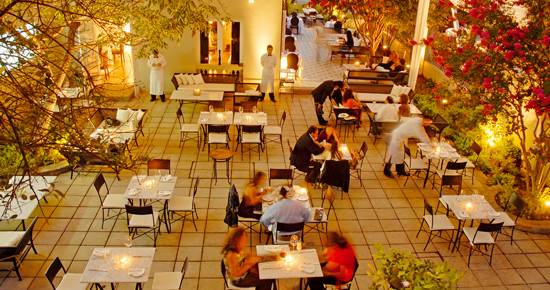 The dining scene in Chile today includes fresh sushi and Turkish coffee as well as Chilean classics. A guide to where, what and how to eat.

For many years, dining in Chile was restricted to the traditional dishes of rural kitchens and urban fast food joints, and traversing the pastures, lakes, beaches and deserts of the Chilean countryside still yields some of the best classic dining experiences. In the cities, however, an emergent international and fine dining scene has introduced a new side to Chile’s culinary personality.

For most Chileans lunch is the largest meal of the day. Dinner is usually referred to as “once,” a light meal late in the evening, while some Chileans, particularly in Santiago, will also have a snack along with an after-work drink in the early evening.

Be aware when sitting down for lunch that asking for the “menu” means the daily fixed price meal or menú: a simple salad or soup to start, a choice of one to three main courses, a soft drink and in some cases a dessert. Prices range from CP$1,500 (about US$3) at the simplest places (expect roasted chicken, fried fish, mashed potatoes and french fries) to about CP$6,000 (US$12) in places with more elaborate options. To see an a la carte menu, ask for the “carta.”

Most restaurants serve beer and wine, but some simpler establishments will not. At the end of your meal, a ten percent tip is customary and generally not included, though it’s always worth checking your bill before leaving extra.

Santiago’s large immigrant populations have brought an influx of exciting and flavorful international restaurants to the city. In the colorful neighborhood of Patronato, just across the Mapocho River from the city center, large populations of Korean and Palestinian immigrants have opened restaurants and markets featuring their native cuisines. The street Antonia Lopez de Bello, which runs from Avenida Recoleta to Loreto, is home to several Asian groceries and Korean restaurants.

In the districts of Providencia and Las Condes, expat communities and an increasingly international Chilean public has brought international chains as well as restaurants representing the cuisines of Japan, China, Vietnam, Thailand, Italy and France amongst others.

Over the last ten years, Santiago has become the gourmet heart of Chile, with the Costanera Nueva in the up-market district of Vitacura as the city’s culinary hub. Santiago’s hotels also house some of the city’s best restaurants, including those at the W, Sheraton, Ritz-Carlton and the Aubrey.

For some of Santiago’s top destinations, check out the avant-garde, endemic cuisine at Boragó, the creative seafood preparations at Puerto Fuy or the classic continental dishes of Santiago’s classic fine dining venue, Europeo.

Throughout Chile, seafood and produce markets are often the best places to try traditional foods. In Santiago the Mercado Central offers delicious seafood lunches, while the crowded locales at La Vega serve up all things Chilean at unbeatable prices. In Puerto Montt, the market at Angelmó is surrounded by restaurants turning out local seafood dishes, and the vibrant produce market in Temuco (not to be confused with the handicrafts market) is heavily inflected by the large local population of Chile’s largest indigenous group, the Mapuche. When walking through markets, or along the docks in Chile’s many coastal cities and towns, don’t hesitate to ask questions. Friendly Chileans, ever proud of their national products, will often offer a taste. Keep in mind that markets close in the early evening, so eating here is a daytime affair.

Though fruit and vegetables are Chile’s second largest export (after copper), wine is undoubtedly the best known. Cabernet, Carmenere, Sauvignon Blanc, Chardonnay and even Pinot Noir are amongst the varieties of grape grown in Chile’s expansive and diverse wine growing regions, many of which are within easy striking distance of Santiago.

But wine is far from the end of the story. The Elqui Valley in the north produces pisco, the essential ingredient for Chile’s national drink, the Pisco Sour, and microbreweries throughout Chile produce some of the best beers in Latin America. Chicha, a sweet, lightly fermented grape beverage is traditional during national festivities. Fresh fruit juices like pineapple, mango, strawberry and raspberry amongst others are also readily available.