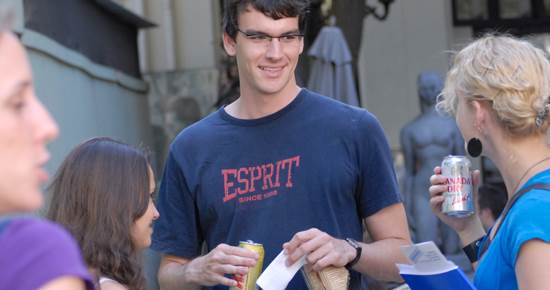 The number of foreign students coming to our country increases every year. There were over 10,000 foreigners studying in Chile in 2008. A large percentage of these students came here as part of exchange programs. Most Chilean universities have agreements with international institutions for undergraduate and post-graduate exchange programs.

These are agreements with institutions from all around the world, including countries such as the United States, China, Germany, Sweden, Australia, Brazil, Argentina, Finland, Japan, Spain and the United Kingdom, among others. Universidad Católica de Chile, for example, has over 1,350 foreign students per year and 95% of these are from the United States, Europe, Asia and New Zealand.

Regular courses are offered in the case of agreements signed with other universities, but there are also special cases in which students are admitted that do not necessarily come from institutions that have signed agreements with Chilean universities.

A substantial percentage of foreigners coming to study in Chile choose careers such as Economy or an MBA in Chile, Political Science and Literature. The country’s economic model and the signing of several free trade agreements, a successful model of democratic transition and a fine tradition of world-famous authors are the main reasons why students are interested in coming to Chile to study. The environment, marine ecology and sustainable development are other popular careers.

There are universities that allow students to get two degrees, one from the Chilean university and another from their university of origin. Most of these programs have been designed together with European and North American institutions.

Tuition costs depend on the number of credits a foreign student wishes to take. Some universities such as Universidad Católica normally have between 35 to 40 credits, although there are no restrictions and students can take more courses if they want to. However, in the case of international agreements, foreign students continue paying tuition to their universities of origin, which means that they are not required to pay the university they visit.

Subsequently, if the exchange request is accepted by the Chilean university, the same will send a certificate so the student will be able to get a visa.

Foreign students should speak Spanish well, because most courses are taught in this language. For intensive Spanish courses, see Learning Spanish.