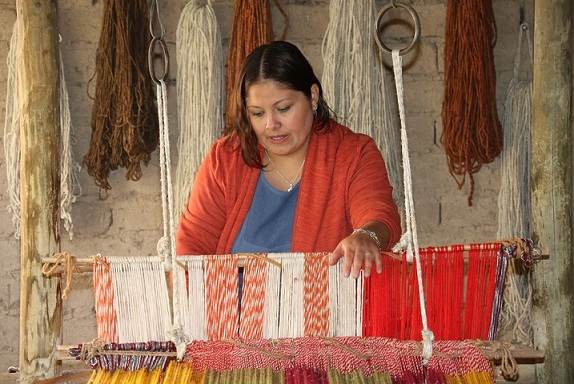 Every type of craft that can be found in the national territory is a reflection of the strong influence of the indigenous cultures that are part of our history, and they blend with modern aspects of the Chilean everyday life. Several towns and cities have taken advantage of their traditions and nowadays are widely known for their products and techniques. On this note you will be able to know some of the places in Chile that are famous for their works.

Chapilca: Located in Coquimbo Region, the town of Chapilca is known for the work of their weavers. The technique has more than 100 years of experience that have allowed the development of knittings and textiles created with sheep’s wool. The craftswomen do not only dedicate their time in knitting, they also raise the animals, pull out the wool, spin the strings and dye it with natural colorant. Within the products that can be bought it’s possible to find rugs, purses, saddlebags, and ponchos, among many others.

Combarbalá: This northern town has benefited from the presence of one national stone near its area, the “Combarbalita”. This semi-precious stone is formed by the alteration of volcanic materials over eight million years ago. From pre-Columbian times, this stone has been used for the elaboration of crafts, specially by the Diaguita people, and nowadays it’s used for the creation of small figurines, jewelry, chinaware, sinks and big statues.

Pomaire: This location is widely known for its handicrafts, especially its detailed and meticulous made pottery. Of a red colour, with a smooth and bright surface, this kind of pottery captivates the eyes of national and foreign visitors. Among the products, you can find plates, jars, platters, dishes and the well-known piggy banks.

Talagante: Six generations of craftspeople have made this multi-coloured ceramic tradition an art worthy of recognition across the globe. Different scenarios made with ceramic, that reflect the traditions of the countryside, along with its flora and fauna. An activity that dates back to the colonial period with strong influences of the Claritas nuns, that nowadays have crossed the borders with its tiny characters and colourful creations.

Chimbarongo: This place is known for its works in wicker, a tradition based on the farmer traditions of Chimbarongo more than a century ago. From baskets and hat, to furnitures and decorations made of wicker, such as lamps, tables, chairs and even couches; are some of the products that are possible to acquire in this place located in the O’Higgins Region.

Rari: This small village located in Linares province has increased its popularity due to its unique craft made with “crín”, or natural horse hair. In order to create amazing objects, such as hats, baskets or personal accessories, craftspeople intertwined by hand the “crín” and the “ixtle”, a mexican product that gives stability and strength to the creations. These amazing products have found a place on international markets, where the amazing details and colourful designs have captivated the public.

Quinchamalí: This town has learnt how to develop and stand out for its pottery, that sets itself apart from other due to its black colour and amazing white details, whether they are shaped as flowers or geometrical patterns. The colour of these pieces is due to the fact that they are cooked over guano, that with its black smoke dyes the pottery. It’s possible to acquire jars, plates and decorations such as the popular “guitarreras”. A tradition that started many years ago, during the times when indigenous people inhabited the Biobío Region.