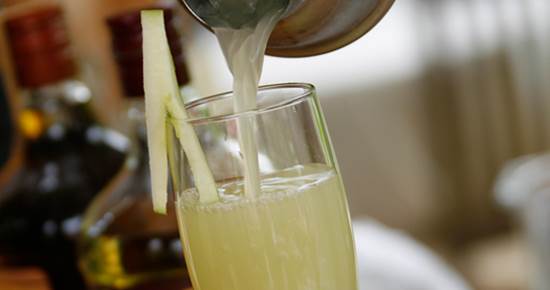 Raising one’s elbow is a local saying and an exercise to toast with a glass of wine, chicha or pisco sour.

In addition to wine, grapes are the origin of other traditional alcoholic beverages in Chile. Perhaps the most popular is chicha, fermented grape juice of Mapuche origin that can also be prepared with fermented apple juice. At the Military Parade during the Fiestas Patrias celebrations it is traditional for the President of the Republic to drink a chicha en cacho, or served using a bull’s horn for a cup and offered by a representative of the huasos, as men from the Chilean countryside are called.

Pisco is also produced from grapes and is a traditional liquor from the northern valleys. The best known piscos come from the Elqui Valley, where there are several distilleries that can be visited, in this area where the poet Gabriela Mistral was from and which has some the cleanest skies in the country. The soil and warm, dry climate with high temperature contrasts, together with the waters of the Elqui River, provide conditions that are favorable to the growth of different types of muscatel variety grapes that are distilled to produce pisco with different strengths.

It is available at 30, 35, 40 and 43 percent alcohol, from common pisco to grand piscos. Some of the muscatel grapes are Alexandria, pink, black, and early white. Pisco can be drunk on its own, mixed with a cola drink for a popular piscola or as an aperitif, with the not-to-be-missed pisco sour, prepared with pisco and lemon juice. Meanwhile, a typical drink at folk gatherings or performances is vino navegado, a mixture of hot wine with oranges.

Wine with fruit is called borgoña or ponche. There is also distilled liquor with 50 percent alcohol that is used to prepare cola de mono (monkey’s tail), in which it is mixed with milk and cinnamon and is drunk during the Christmas and New Year celebrations. This liquor, mixed with milk, is also the basis for liquor de oro (gold liquor), which is called thus because of its color. It is characteristic of the Los Lagos Region in the country’s south.