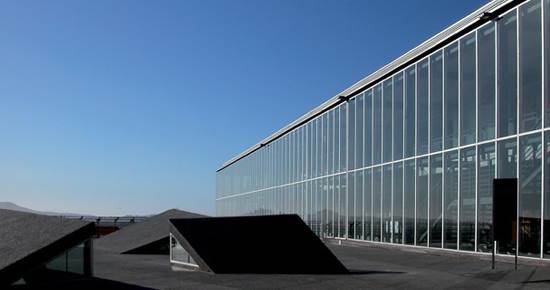 Nature imposes its conditions on Chile.  As a result, Chileans have adapted their houses and buildings to tolerate the demands of nature.  In the country, there are easily accessible flat areas, steep areas close to the mountains, and wet, forested areas in the south.  Moreover, the country is seismically active, which introduces additional challenges to construction.

Today, the use of modern technology permits the construction of creatively designed buildings. Santiago and other large cities display to visitors the work of Chilean architects – a group of professionals that understands how to unite history and ancestral culture with new techniques, trends, and materials.

However, it is still possible to find a ruca in southern Chile, the original homes of the Mapuche.  Colonial style buildings are common in many different cities. Also, European influence, especially German, is strong in the southern part of the country.

The variety of climates of Chile has also determined its architecture. In the dry north, materials such as stone, mud and straw dominated historically, in the center it was the «adobe» (clay and wheat straw) and tile and in the rainy south, the wood.

In between history and foreign influence, one witnesses intelligently-constructed and architecturally complex buildings of enormous size that express the creativity of Chilean architects. Innovation and cutting edge are mainly seen in Santiago, where green and sustainable buildings have appeared.
Cities demonstrate this diversity and contrast through the works of architects ranging from Borja Huidobro, who is perhaps the most well known Chilean architect in the world, to the minimalistic public housing projects of Alejandro Aravena.

Architecture serves to protect both cultural identity and respond to the challenges of modern living.  Technology offers new architectural possibilities.  The port city of Valparaiso was declared a Unesco World Heritage Site in 2003 due to the ingenuity of its architectural solutions.  The same recognition extends to the National Park of Rapa Nui on Easter Island, as well as, the 16 wooden churches in Chiloé that integrate the cultural richness of this area of Chile.

Christian Boza’s work demonstrates the eclectic current.  Fernando Castillo Velasco and Emilio Duhart are rationalists. Mathías Klotz and Felipe Assadi represent modernism. And, finally, Alejandro Aravena is part of the modular movement. As in other areas of the Chilean culture, architectural diversity is the principal characteristic.

Buildings like the Casa de Moneda and the Santiago Cathedral, which were designed by the Italian architect Joaquín Toesca, reflect 16th century neoclassical architecture within the context of urban development within the capital. Another foreign architect that left a mark in Chilean was Gustave Eiffel, the creator of San Marcos Cathedral in the Arica.  In the northern part of the country, close to salt mining installations, English and North Americans introduced the Georgian style of architecture in the 19th century.  From this movement emerged entire villages build from adobe and Oregon pine.

Some of these works are found in the El Bosque neighborhood in the eastern section of Santiago.  Nearby, in the El Golf neighborhood, the Consorcio National Insurance building attracts attention for its design.  Similar projects have been changing this area of the city and converting it into a new financial center.

In other sectors and segments of the society, the architect Alejandro Aravena has developed new design options, which have won him various international prizes.  Ever since his project names “Elemental,” Aravena has added architectural relevance to public housing.  Some of his projects have been built in the city of Iquique and in the Renca and Lo Espejo townships of Santiago.

Presently, in Chile, there is a process unfolding that seeks to relate aesthetic architectural principals with new notions for understanding the profession and the modern city without ignoring cultural identity and heritage.

Influences from Pre-Columbian, colonial, neoclassical, and the 19th/20th centuries are visible throughout the country.  They are architectural monuments that have appropriately been declared historical heritage sites.  On Easter Island, there are alters built from stone that possess Orongo beauty, the ceremonial city of 47 houses constructed from stone masonry.  The roofs and walls of these houses are painted in white, black, and red.

In the south of Chile, on the island of Chiloe, peculiar houses are erected on posts buried in the beach.  In the north of the country, architectural diversity is evident in, for example, Toconao, a village of pre-Hispanic origin build in an oasis close to the town of San Pedro de Atacama.  The church of Toconao (San Lucas) is an interesting example of liparita architecture build from soft, white volcanic stone from a local quarry.  The bell tower of the church, which is also declared national monument, was build from stone and mud around the year 1750.  The structure has three staggered areas separated by cornices anchored in the roof by squared peaks and a roof made of cactus wood.

Remarkable historical value is conserved in pre-Columbian architecture.  Examples of this architecture include farmhouses built between 1,500 and 4,000 meters above sea level in the north along the Inca Trail, as well as, the Pucarás, Incan fortresses located in the central region of the country.  Another interesting example is the rukas, circular Mapuche houses made out of wood and covered in hay.  They are oriented from east to west, with the entryway facing east in order to receive the first rays of sunlight in the morning.

Both historical villages and modern work incorporate the design creativity of Chilean architects.  Together, they form the architecture of a country with crazy geography and invite the rest of the world to visit.