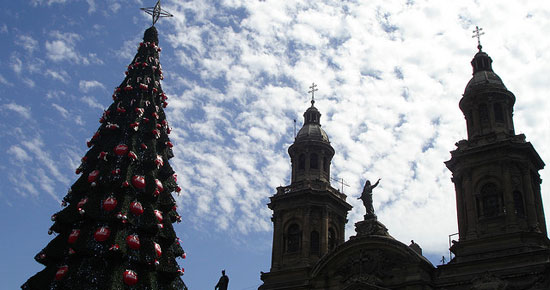 There’s special food, special drink and of course Santa Claus as well – only with a different name.

As the days grow warmer and the evenings last longer, Chile starts to prepare for Christmas. In living rooms and town squares throughout the country, lavishly decorated trees sprout up, joined by strings of colored lights and stuffed Santa toys.

Even though it’s almost summer, the buzz of Christmas cheer is in the air, just like in scores of other countries around the world.

So what is it that makes a Chilean Christmas special and unique?

First of all, it starts early. Although Christmas Day is officially celebrated on December 25, the real festivities in Chile kick off on Christmas Eve, or “La Noche Buena”.

Very much a family affair, groups of relatives and neighbors gather on December 24 to share a special dinner made up of roast chicken or turkey, along with mixed salads and a dessert consisting of delicious local fresh fruits.

But the real highlights of this feast are “pan de pascua”, a Christmas bread similar to fruit cake, and “cola de mono”, or monkey’s tail, a traditional drink prepared with spirits, milk, sugar, coffee and cinnamon.

For many Chilean families, Christmas celebrations also have an important religious significance, with large attendances at Christmas Eve mass, known throughout Chile as “Misa del Gallo”, or the Rooster’s Mass. The Christian component also extends into the home, where a nativity scene – “pesebre” – complete with shepherds, animals and wise men, is often placed under the tree.

Many families also gather to sing “villancicos”, or traditional carols, which draw on Chile’s rich farming heritage, and to read the accounts of the birth of Jesus from the Bible.

Of course Santa Claus has a role in the celebrations as well, but in Chile he’s more likely to be called “Viejito Pascuero” or “Papá Noel”. And due to the scarcity of chimneys, as he delivers presents to the boys and girls of Chile, Viejito Pascuero usually enters their homes through the window. On Christmas morning, children open their gifts and head out into the sunny streets to ride their new bicycles, fly their kites and compare notes with their friends.

Throughout the day, families meet up again to go to mass, share a huge lunch and chat away the afternoon.

Then it’s time to pack up, head home and start preparing for the New Year celebrations.