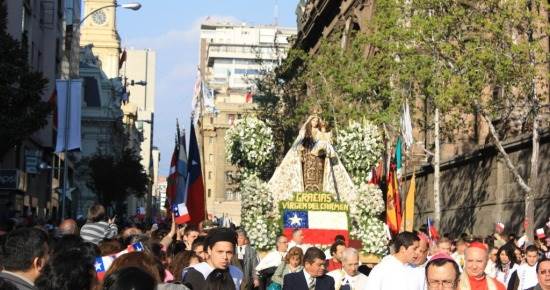 The image of the Virgen del Carmen was marched though the streets of the nation’s capital for a crowd of thousands. One of the oldest Christian festivals in Chile, the march celebrates the patron saint of Chilean independence one week after the end of Fiestas Patrias.

The Virgen del Carmen—known in English as Our Lady of Mount Carmel—is the devotional center for the Carmelite monastic order. Saint Teresa of Avila and Saint John of the Cross, two of the Carmelite order’s most important figures, both came to prominence in 16th century Spain. Then at the height of its imperial power, Spain brought the influence of these saints to its colonial holdings in Latin America, inspiring large followings of the order as early as the 16th century.

The procession, held annually in Santiago, began in the 17th century. Originally held in July, the procession carried the image of the virgin from the colonial city’s main street, the Alameda, north to the Plaza de Armas. Tradition has it that Bernardo O’Higgins, one of Chile’s best-known liberators, declared the Virgen del Carmen the Protector of Chile during the national struggle for independence. In a chant repeated throughout the procession, the Virgen del Carmen was referred to as “mother of all Chileans.”

In 1971 the date of the procession was shifted to the final weekend in September, one week after the Fiestas Patrias. Including the procession in the month’s independence festivities forms a connection between worship of the Virgin and Chile’s victory over Spain in the same way O’Higgins did two centuries ago.

For Sunday’s parade, groups from Santiago’s Catholic schools gathered behind standard bearers along with representatives of the Red Cross and the branches of the Chilean military. Crowds gathered in the Plaza de Armas and along the parade route, waving Chilean flags, singing religious songs and reciting prayers in unison. When a group of miners processed through, applause and whistling broke out amongst the crowd, an expression of pride and solidarity with the 33 trapped miners near Copiapó as the rescue effort continues.

The parade was led by a group of performers dancing the Baile Religioso Diablada. The traditional religious dance has its origins in the altiplano where Chile, Peru and Bolivia meet. Each country is home to its own version of the dance, but all likely originate in indigenous worship of the earth goddess Pachamama. After the arrival of Catholicism, the dance was incorporated into Christian religious symbolism as representing the battle between good and evil. In its current form, men dressed in elaborate demon costumes dance at the center, while women in colorful hats and dresses dance around them.

The performers at Sunday’s parade came from Maipú, a southeastern suburb of Santiago and home to the Votive Temple of the Virgen del Carmen. It was here that the decisive battle for Chilean independence was fought under the leadership of Bernardo O’Higgins in 1818. Following the battle, O’Higgins ordered the construction of the Temple. To this day, Maipú remains the center of Santiago’s devotion to the Virgin.

Approximately 5,000 Santiaguinos came to the city center for the parade. Although the event is primarily a religious celebration, its current form combines religious and patriotic fervor. For many Chileans, the procession of the Virgin is an affirmation of Catholicism’s central role in the history and continued prosperity of their nation.