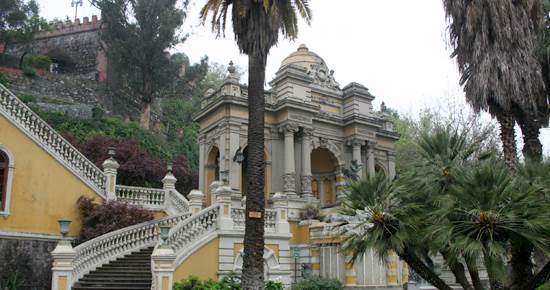 The native peoples who traveled the Incan Trail down to the banks of the river now known as the Mapocho would not have imagined that 500 years later 5 million people would populate the capital of Chile. That was the route taken by the conquistador Pedro de Valdivia, an emissary of Francisco Pizarro’s, to reach in the Mapocho Valley and found Santiago.

The name was in tribute to the Apostle Santiago, patron saint of Spain. The city was designed in the Spanish style, with a Plaza de Armas in the center and a chessboard network of streets.

The Mapuche people resisted the Spanish occupation and harried Santiago for decades. In September of 1609 the city gained in strength when the colonizers established the judicial institution of the Real Audiencia in the Plaza de Armas. However, the indigenous resistance was not the only threat: the earth moved and the city was hit by several earthquakes. Santiago was rebuilt over and over again. During the 18th century the La Moneda Palace, current seat of government, was built, along with the Cathedral, the Cal y Canto Bridge and the embankments of the Mapocho River, which prevented it from flooding its banks.

Airs of independence began blowing in 1810 and the first National Government Junta was created, with which the process of emancipation was begun. Santiago became the capital of the young nation in 1818, the year of definitive independence. At the time the city had 45,000 inhabitants.

Decisive urban development began under Provincial Governor Benjamin Vicuña Mackenna, who in 1872 undertook an ambitious remodeling program with funds from mining exports. Parque O’Higgins, the Municipal Theater, the Santa Lucía Hill was converted into a public walkway and the Club Hipico racetrack  date back to this period.

New projects were built to celebrate the centennial in 1910, such as the National Fine Arts Museum, and the railway network was also expanded. The city’s population increased significantly, growing by 53% between 1907 and 1920, to a total of 510,000 inhabitants. Migration from the countryside to the city increased with the international economic depression of 1929.

After the economic crisis the city experienced accelerated growth as a financial and services center. In the 1960s new architectural and infrastructure projects were undertaken. The ring road Avenida Americo Vespucio, which runs all around the city, was begun in that decade, as was the metropolitan railway, or Metro, which currently transports millions of passengers every day.

A real estate boom began in the 1990s, with the construction of large numbers of shopping centers in the country’s main municipalities, and a modern network of urban highways has also been built. Corporate buildings have gone up in the eastern part of the city, housing important companies and international corporations. The Chilean capital is considered one of Latin America’s business center in the 21st century.