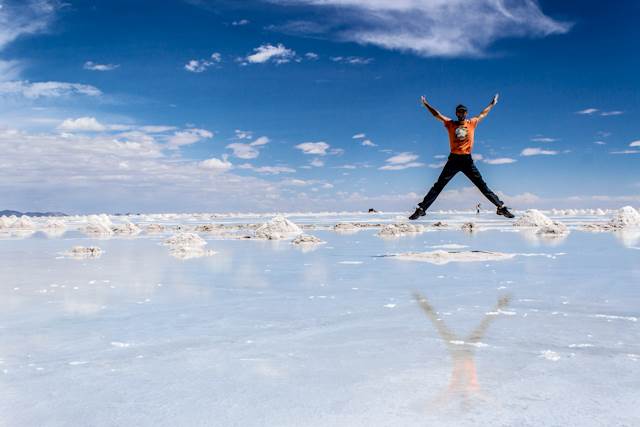 Nestled in the dramatic Andes mountains is Bolivia, one of South America’s poorest but also most fascinating countries to travel. From the magnificent Salar de Uyuni salt flats, to La Paz, one of the highest cities in the world, Bolivia is a real assault on the senses. Life in Bolivia is different in so many ways and at times it can be an adventure like no other– a simple 2 hour bus journey may end up taking an entire day (usually due to a DYI road blockade), but you will never be bored and you will leave with endless memories.

It’s an incredible country exploding with culture and my second favourite place in South America after Colombia. However you’ll probably need to acclimatise to the Bolivian ‘way of life’ and keep these local beliefs and customs on your radar:

Bolivians are probably the most superstitious people in Latin America. I learnt this the hard way. One morning whilst wandering around a food market in La Paz I was faced with a fantastic photo opportunity – a ‘cholita’ (indigenous woman) complete with her traditional bowler hat drowning in a sea of avocados she was trying to sell. The second I got my camera out to capture the moment she lobbed an avocado at my head. Initially I was baffled by the avocado assault when I read into it, I quickly discovered that I was in fact completely in the wrong. Bolivians (notably the indigenous Quechuan and Aymaran population) believe that when you take a photo of someone you take their soul with you. So for the shutterbugs among you, make sure you ask for permission before taking that snap!

The following day I took myself off to the infamous witches market. I was a little taken back by the sight of dead llamas draped outside shops windows. Again, this is a local folklore. When you build a home in Bolivia, you bury a llama foetus underneath it to warn off the devil. Essentially, the foetus brings you good luck.

Like much of Latin America, Bolivia is a devout catholic country. However, here there is a higher power. She comes in the shape of Pachamama. Translation: mother earth. As suggested by the name she is the goddess of earth and everything it encompasses – life, nature, harvest and fertility. For locals, an earthquake or natural disaster is a direct consequence of upsetting Pachamama. Bolivians therefore do all they can to keep Pachamama happy which in turns makes them people of the land. Before I began my cycle down Death Road (a must-do by the way) we were all invited to make a toast to Pachamama and ask her to protect us from the potential danger looming around each corner. The toast entailed drinking a shot of chicha (fermented alcohol made from maize) and pouring the rest on our bike tyres and the ground (Pachamama). We made it down in one piece so someone was watching over us that day!

La Paz sits at 3500m and the local airport is at a mighty 4000m. As a comparison, Everest’s base camp is only 1000m higher so you’re not far off in terms of dizzying heights. Luckily Bolivia has a local natural remedy which really helps to combat any altitude sickness; coca leaves.  It’s a natural anesthetic jammed packed with fibre and protein so whenever you had a headache, stomach ache, wound or sore, the response was always the same “drink some coca tea”. The coca leaf is so engrained in local culture that all hotels will have a bowl of them on the breakfast table. You take a handful of leaves and add hot water (coca tea) or chew a bunch of leaves and miraculously feel better within 20 minutes. When your head feels like it’s about to explode, the coca acts as a pin releasing the pressure.

The coca leaf also has deeper significance in Bolivia. For example when a man wants to marry his cholita, he must offer a bag of coca leaves to his potential father-in-law. Whilst in a religious capacity, Bolivians will shower Pachamama with gifts; the primary offering will be coca leaves. Given its link to cocaine the leaf is banned outside of Bolivia and Peru but this didn’t stop Bolivian President Evo Morales suggesting to Pope Francis that he consume coca for health benefits, at a summit recently!

The best part of travelling Bolivia was the sheer intensity of the place. Epic 14 hour Carnival parades, somewhat peculiar customs – this country is authentic and like no other. You won’t know why that bus didn’t arrive, you’ll struggle to break into that $10 note but it’s all part of the Bolivian experience. You just need to go with the flow.