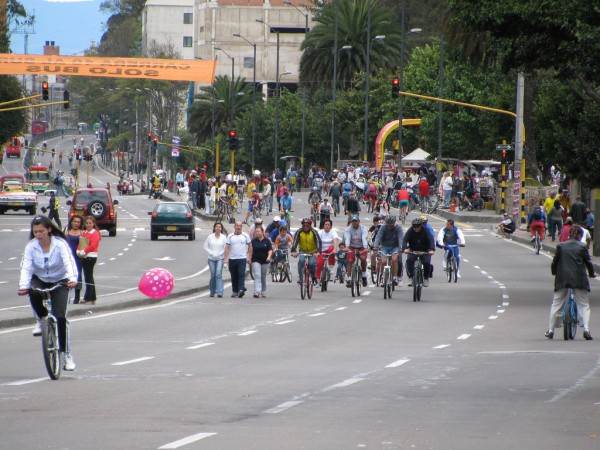 What’s one of the worst parts of city living? I vote for traffic clogged streets filled with smog producing old cars, loud horns blaring, and grumpy commuters. Unfortunately, this is an almost universal issue with cities around the world. Even with a greater focus on pollution and more cities investing in public transportation, it will likely be many, many years before we are able to completely give up the automobile. Another side effect of this car loving city culture – unhealthy citizens who would rather hail a cab than walk a few blocks. Wouldn’t it be nice if we could reclaim the ugliness of our roads and promote health and safety, even if just for one day?

Well, Bogota, the capital of Colombia, has already done just that. Every Sunday from 7am to 2pm major roadways throughout the city are closed to motorized traffic. Instead, the roads fill up with literally millions of bikers, joggers, and roller skaters. The event is so popular that an estimated 2 million residents (around 30% of the cities total population) come out to participate every week. Known as Ciclovía, which translates to mean bike path, the closure of the city’s roads actually dates back to the late 1970s. Over the years it has spread to other Colombian cities and even across the continent. In the beginning only a few roads were closed but now, in Bogota alone, over 120 km of roadways are closed to traffic and opened to the public.

Residents come out to enjoy the usually good Bogota morning weather, walking, biking, or skating along. Street vendors set up small stands selling almost anything you might need and delicious street food is plentiful. You will see little kids learning to ride their first bike, couples skating along hand-in-hand, elderly woman enjoying their morning stroll, and almost every other type of person you can imagine. What you won’t see, or hear, are noisy smelly cars, trucks, or city buses.

In 2007 a Colombia congressman tried to shorten the Ciclovía, having it end at 12 instead of 2pm, due to the traffic build up that can occur on side streets as cars try and avoid the closed avenues. The proposal was protested and shut down almost immediately but the many people who see the Ciclovía as their reclaiming of the city and as a public service.

This is far more than a stroll through the city’s streets. A number of other activities also occur during the Sunday Ciclovía. Yoga and fitness instructors are known to set up free sidewalk lessons while stages are set up in local parks off the avenues with live local bands and theater groups performing. Unicycles, jugglers, fire twirlers, and other street performers also seem to pop up every few blocks.

If you are in Bogota on a Sunday, forget the sightseeing and save yourself the headache of sitting in side street traffic. Ask your hostel if they rent out bikes or skates; if not, head down anyways for a nice stroll and a great opportunity to see Bogota’s local lifestyle.