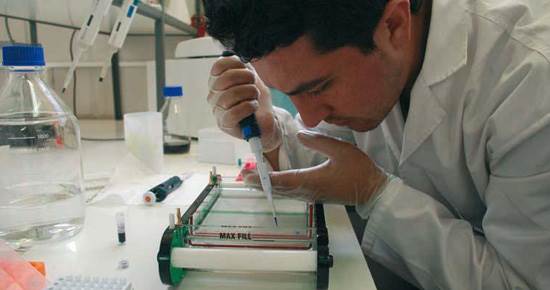 In mid-2009 the multinational firm Syngenta inaugurated a US$ 20 million research center in the far north of Chile. The desert climate in the Azapa Valley is the ideal place to test hybrid crops in a 42-hectare greenhouse, the most modern of its kind in South America. Corn, soybean, and sunflower will be the subjects of research using the latest techniques on luminosity, humidity, temperature and irrigation. This example reveals the importance that biotechnology is acquiring in Chile.

The state has also expressed its commitment and Chile ratified the Patent Cooperation Treaty (PCT) shortly before Syngenta was launched in Azapa, which another 140 countries had already signed. And it debuted on the world stage precisely to protect the biotechnology creation of a local scientist.

The country had already made its presence felt in this area internationally when, together with the United Nations, it held the First Global Biotechnology Forum in the city of Concepción in 2004, reaffirming the country’s commitment to developing this area, which integrates biology with medicine, agriculture, industry, and the sea, among other specialties.

Since 2005 the Chilean state has contributed US$ 200 million through the state-run Production Development Corporation (Corfo) and, specifically, its Innova program. Of this amount, almost 20% has been reserved for genetics, which has allowed over 100 companies to engage in research to improve the products of sectors like fruit, wine, salmon, and forestry.

These public and private efforts have led to discoveries with immense potential, which in many cases have attracted worldwide interest. Some of them are summarized in the document on 70 innovation and scientific success stories for the promotion of biotechnology.

The Azapa Valley near the city of Arica has become one of the most important biotechnology development poles in Chile. The installation of the Swiss firm Syngenta is added to companies like Pioneer Dupont, Sakata, South Pacific Seeds, Massai, Anasac, CIS, Tuniche, and Maraseed, whose investments total around US$ 46 million.

The state’s support is materialized through Corfo’s Innova program. The institution’s funding has been concentrated in 14 programs related to the improvement of wine, salmon, fruit and forestry products. Corfo is supporting the work of 39 research groups and 116 companies.

According to Innova estimates, the Chilean biotechnology industry is growing by around 20% per year, especially if you add the 17 technology consortiums operating in the country. Of them, 60% have based their research on this discipline, with US$ 132 million committed.

Corfo’s numbers are simply categorical, as the number of specialized firms has practically tripled over the last four years. 60% of them concentrate on improving natural resources, while 22% work in biomedicine. In addition, there are 61 research centers and 215 groups of specialists.