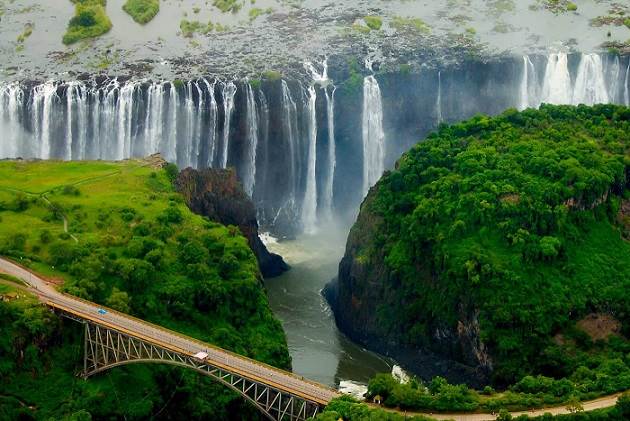 Due to its prime location in Southern Africa, Zimbabwe is considered to be an excellent year-round destination. That said, the best time for your holiday all depends on what your focus is. Overall, May to September is regarded as the best time to visit Zimbabwe. It is also the best time for touring the magnificent Victoria Falls. High season in Zimbabwe runs from July to October. However, the national parks never reach the crowd sizes of some of its neighbouring countries – aside from Victoria Falls, which can become extremely busy. Low season runs from November to April.

The weather
in Zimbabwe

The best weather in Zimbabwe usually occurs in April, May and September. Temperatures are comfortable, skies are blue, there’s lots of sunshine, and the mosquitoes are much less of a bother than during the wet season.

The wettest months are February to December, which is Zimbabwe’s low season. Rain falls almost every day, but generally only in the afternoons. The low-lying national parks in Zimbabwe reach extremely high temperatures during this time, which combined with the wet weather can make it very uncomfortable for game drives.

The best time for observing wildlife in Zimbabwe is during the dry season, which runs from May to October. As the lush vegetation wilts in the scorching sun, the wildlife of Zimbabwe is driven into the open to drink, bathe and play at the watering-holes. That said, don’t dismiss the wet season entirely – it is the best time of year for witnessing newborn animals and birdwatching.

The Zambezi River reaches its peak height, forcing dramatic arcs of spray into the air, so strong that it blocks the view of Victoria Falls. April and May are the beginning of the dry season where it’s not too hot, malaria risk is low, and wildlife is concentrated around watering-holes. Many national parks are still closed in March.

The low-lying regions of Zimbabwe reach sweltering temperatures in October with highs soaring well into the 30s. September to October is the ideal time to visit Hwange National Park to see their tremendous herds of elephants. The rainy season begins in November.

Summer is Zimbabwe’s low, rainy season which lasts until March. Due to the lack of tourists, many lodges around Mana Pools National Park and Hwange National Park close. Lots of wildlife are born during the rainy season, so it’s an excellent time to see newborns.

Zimbabwe has a lively culture with a fascinating history and a unique set of traditions and beliefs. Attending a local event is one of the best ways to experience their culture. The good thing is, Zimbabweans love to celebrate! At any time of the year, it’s entirely possible that you’ll accidentally stumble upon a festival, celebration or party during your holiday. Here are some of the best festivals in Zimbabwe to keep in mind.

One of the largest festivals in Zimbabwe, the Harare International Festival of Arts attracts visitors in their thousands. Both local and international artists perform a selection of theatre, films, music and visual arts over the space of 6 days. There’s also an excellent collection of market and food stalls.

The Jikinya Traditional Dance Festival celebrates a variety of traditional cultures in Zimbabwe. Primary school children travel from all over the country to perform traditional, indigenous dance routines. The event changes location each year with the finale happening in either Harare or Bulawayo.

If you can’t wait to taste African food, there’s no better place to start than the Harare International Food Festival. Showcasing everything from local dishes to world-famous South African wines, this festival brings together the best of the foodie scene in Zimbabwe. But don’t just expect African dishes, you’ll find everything here from pasta to whisky.

The most significant new year’s eve party in the country, Victoria Falls Carnival lasts three days and sees in the new year in style. Performances from local and regional artists, visitors decked head to toe in extravagant dress and dancers parading the streets to the sound of pumping African music.

Since 2013, Zimbabwe has joined the rest of the carnival-goers around the word and held an epic street party at the end of May. Expect a week-long festival of bright colours, performances, loud music, events, beauty pageants and samba dancing! You’ll also find some incredible street food.

Zimbabwe’s Summer Beer Festival is one of the most exciting music events in the country. Lion Lager sponsors the festival so you can expect the day to be filled with lots of beer! You’ll see numerous performances of jazz, reggae, hip hop and multiple DJ Battles.

A festival of live comedy, poetry, epic concerts and crazy DJ parties, Shoko Festival is like no other. The festival spans over three days and concentrates on showcasing the local Zimbabwean talent, earning itself the title of ‘Zimbabwe’s biggest festival of urban culture’.

This small town in the Eastern Highlands of Zimbabwe grows to accommodate the thousands of visitors than make the journey to the largest free festival in the country. For three days in August expect theatre shows, dance, film, music, poetry, art and storytelling.